Shogun Rua - Prepared for the Battle after the War

"I’m motivated more than ever. I want to win, make the best
Fight of the Night, and in my mind I want to offer a great show to the
fans." - Mauricio "Shogun" Rua 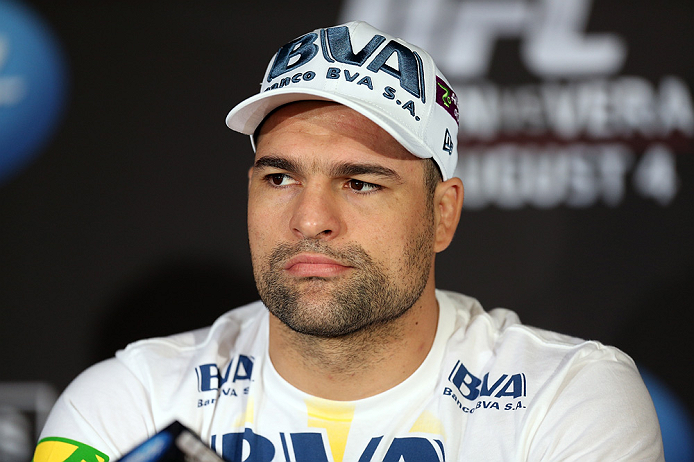 It was the greatest mixed martial arts fight of all-time. If you want to debate that statement, feel free, but I will not be swayed. When Dan Henderson and Mauricio “Shogun” Rua met in the main event of UFC 139 last November, everyone expected the long-awaited showdown of former PRIDE superstars to be good.

Probably not, and only because you never saw two high-level fighters engage in 25 minutes of non-stop action with more twists and turns than a Hollywood thriller like this before. Yes, there have been great three round fights, great early finishes, and great five rounders that inevitably had some lulls in them. But nothing like Henderson-Rua.

When it was all over, the result really didn’t matter, only because neither fighter would lose an ounce of stature after such an effort, but for the record books, it was Henderson earning a close, but unanimous decision.

In the days and weeks following the bout, fans and pundits rightfully showered praise on the two combatants, but when that died down and talk centered around the next big fight, Henderson and Rua had to live with the aftermath of the most punishing and exhausting bout of their careers. It was particularly tough for “Shogun.”

“For sure I watched this fight many times,” he said through translator / manager Julio Heller. “It was a war, very aggressive, brutal, and for me, the fair result was a draw. It’s so funny because up until now many fans and friends ask me ‘why you didn’t do this or that, especially in the last round,’ and my answer is so simple: after four rounds of a war with my eye almost closed, it is a little difficult to think about strategy.”

Nearly nine months later, Rua can be light-hearted about such matters, but at first it wasn’t that easy. The worst incident occurred on the night of the fight, as an erroneous news report about his condition alarmed his wife and was only able to be remedied by a call from San Jose by the former UFC light heavyweight champ.

“My mother never watched my fights, and my wife was very scared, especially after she heard some news that I had a terrible injury in my head, that was not true,” Rua recounted. “Only after I called her late at night in the hotel, after all the exams in the hospital, did she believe that I was okay.”

Once back home in Brazil, Rua estimates that he was back to feeling good physically after a month of rest, but says “to be honest it took more time to recover emotionally.”

Eventually though, one of the sport’s most revered figures got back to business in the gym, and bolstered by the support of his loyal fans, he plotted his return to the top of the light heavyweight division.

“In sports, the fans are everything,” he said. “They motivate us all the time, and it is incredible to have the recognition from so many people. I have messages on my Twitter and website from all over the world, supporting me and sending me a wonderful energy and positive vibrations.”

Yet as the months went by, the question was who would Rua’s comeback opponent be? Sure, he had lost two of his previous three, but the Henderson fight was a razor-thin decision loss in a classic battle, and before his knockout victory over Forrest Griffin in their UFC 134 rematch, he lost his title to phenom Jon Jones. So he couldn’t take a fight against an unknown and he couldn’t jump right back into a title fight. Thiago Silva was the first choice for “Shogun” at UFC 149, but when Silva was injured, Rua was left without a dance partner again.

Enter Brandon Vera, who was brought in to face Rua this Saturday in the UFC on FOX main event at STAPLES Center in Los Angeles. The Curitiba native likes the matchup, saying, “He’s a striker like me, and likes to use Muay Thai too. He has experience, and I will need to show my best to win, but I'm very focused and my strategy is set for the fight.”

And as an added bonus, UFC President Dana White revealed earlier this week that the most impressive performer out of this weekend’s light heavyweight combatants (Rua, Vera, Lyoto Machida, and Ryan Bader) will find themselves in a 205-pound title fight.

“For sure I’m motivated more than ever,” said Rua. “I want to win, make the best Fight of the Night, and in my mind I want to offer a great show to the fans.”

But since he has unfinished business with both ends of the September 1st title fight between champion Jones and challenger Henderson, does Rua have a preference of who he wants to face should he win Saturday and get the nod for the shot at the belt?

“I think that will be a great fight,” he said of the UFC 151 main event. “Jones is the champion, but he will face a very tough guy, and I can tell you, Henderson is a fighter that deserves all the respect. But I don´t have a preference; my goal is to fight for the belt again, it doesn't matter against who.”

It’s that class and humble demeanor, coupled with his ferocious fighting style, that has made Rua a favorite of fans and his peers. One of those peers is Vera, who has gone on record saying that Rua is one of his fighting heroes.

“I can’t think about that, it could be a trap for me,” said Rua when told of the statement made by his opponent. “Inside the Octagon there are no heroes or friends; I must be focused on my game to do my best and win, always.”

If he does emerge victorious, Rua, who for all his accomplishments and experience in the game is still just 30 years old, may get a nice surprise as he approaches his fifth anniversary in the UFC. That’s longer than he even competed in PRIDE, and while he’s had his ups and downs in the Octagon, he’s happy to have been here that long.

“Five years,” he muses. “Time passed so fast. The UFC is my home, and I feel very comfortable here. I have a deep respect for (CEO and Chairman) Lorenzo (Fertitta), a guy that always treats me with respect. Every time that I meet him I feel that he wishes the best for me. I must mention Dana too; I respect him a lot and all that he did for the sport. I must also mention all the UFC team, I have a great relationship with everyone, they take care of me a lot, and I hope that I stay for a long time in the UFC. I hope that they think the same way.”

Rua laughs, clearly confident and at peace after putting the grueling war with Henderson to rest. So given the positive mood, why not ask him to end this story by saying how the next 12 months will turn out for him, given a perfect world.

“A wonderful win over Vera, I get the UFC belt back, and then coach the next TUF season in Brazil,” he said. “But let’s take it step by step. Right now I’m just thinking about my next fight against Vera. That is my main goal for now, and then we can start to think about the future.”