"I'm happy that fans still remember that fight, and I'm sure Dan is as
well, but for both of us, and any fighter, the most important fight is
always the next one ahead." - Mauricio "Shogun" Rua 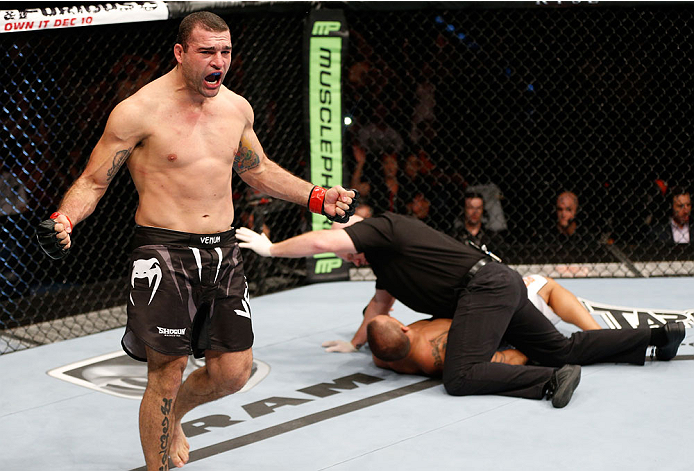 In November of 2011, Mauricio “Shogun” Rua and Dan Henderson went to places most fighters will never know about, and we loved them for it. Their UFC 139 bout was highly-anticipated, but no one expected it to be that good. For five rounds, two superstars who didn’t have the need to add anything more to their fighting legacy fought like hungry rookies seeking a UFC contract. It was the best of the fight game fit into 25 minutes.

But just as great as it was, that’s how fast it was over. Then it was on to the next card and the next card, and so on and so on. Meanwhile, the warriors recovered, far from the view of the public.

“Although the fight was pretty hard, I didn't suffer any serious injuries during the fight,” said Rua through manager / translator Eduardo Alonso. “I was really worn out and dehydrated from the effort, as was Dan, and I had some cuts here and there. But as always in a tough fight in the UFC, the doctors take care of you, they take you to the hospital and check everything, and there wasn't anything serious with me. So it was more a matter of taking a vacation, enjoying family and not rushing back to the gym for the mental aspect of it.”

In some ways, the mental part is the toughest part of the whole ordeal, especially for family members, who don’t take the punches physically, but feel them all the same. And after Rua’s decision loss to Henderson, both his wife and mother wanted him to hang up the gloves once and for all.

“It was certainly much tougher for our families to watch it, that's for sure,” laughed Rua. “My wife and my mother wanted me to retire after that fight, but that soon goes away when you get home and they see you are good. It's tough for them watching, and I'm sure it was very tough for Dan's family as well, but it's just that moment and soon life is back to normal.”

“Regular” life may return to normal as soon as the cuts and bruises heal, but often a fight as grueling as Henderson-Rua can see the combatants leave a piece of themselves in the Octagon or ring. Henderson has gone 0-3 since the fight, losing razor-thin decision to Rashad Evans and Lyoto Machida before being knocked out by Vitor Belfort. Rua dropped two of his next three, beating Brandon Vera in another war before losing to Alexander Gustafsson and Chael Sonnen.

But last December, with his back against the wall and many calling for his retirement with another defeat, Rua returned to form in spectacular fashion, knocking out James Te Huna in 63 seconds.

“I was very happy after that fight because I was under a lot of pressure and there were a lot of doubts from many people,” he said. “I went into the fight as an underdog, I was coming from a couple of losses, there were talks about a need to retire if I had lost, my teammates had lost two close fights in a row in the UFC, and as experienced as a fighter can be, that all adds up to a certain point. So I stayed away from my family and did my training camp in Sao Paulo, reunited with some old friends, and to see the effort paying off was really a great feeling and made me very happy.”

Henderson has yet to feel the exhilaration of victory since the first Rua fight, so it begs the question, did the first match with Shogun change him?

“I don't think so,” said Rua. “Dan Henderson is a great fighter. He has been a top fighter and a dangerous guy for so many years, and he only fought former champions. When you fight the top guys you can eventually lose, whereas if you only fight lesser-ranked guys, you can build winning streaks, and a lot of those fights (Henderson lost) were close. So records and streaks can be deceiving.”

You have to respect an opinion like that, because as much as we can watch fights and analyze them, the one who truly knows a fighter is another fighter. And after their first fight, no one knows Henderson better than Rua, and vice versa. That can be a scary thought, but when Rua was presented with Sunday’s rematch against “Hendo,” he didn’t shy away from it – he wanted to get even.

“Of course every time you have a good fight and you lose you would like to have a chance to fight that guy again,” said Rua. “Dan Henderson is a legend and I have a lot of respect for him, so it's a pleasure to fight him again.”

Only a real fighter would say something like that. Think of the worst torture you can put yourself through mentally and physically and then say ‘yeah, I wouldn’t mind doing that again.’ Has Shogun even watched the first fight? Is it tough to see?

“Yes, I watched the fight, and I think it was a great fight,” he said, echoing the opinions of every fight fan who has seen it, and if you haven’t, you’re not a fight fan. “It's a different feeling to watch it, but I wouldn't say it's tough. It's important to focus on the future. I'm happy that fans still remember that fight, and I'm sure Dan is as well, but for both of us, and any fighter, the most important fight is always the next one ahead.”

And that’s the way the 32-year-old from Curitiba is looking at this Sunday’s main event in Natal – it’s not the next chapter, but a brand new story.

“You can't keep thinking about the first fight all the time, or the fact that it is a rematch,” he said. “It's a new fight, and a complete new story to be written,” he said. “You focus on the day-by-day of training camp, on your coaches, teammates, and on training the things you need to train and the strategy you want to do. I have had some rematches in my life before, and neither of them happened similar to the first fight. So you can't really think of it any different than any new fight you have to do.”

With that, Shogun makes it clear that as far as he’s concerned, there’s no pressure to repeat the fireworks of November 19, 2011.

“Not at all,” he said. “I think fans always expect an aggressive fight from us, regardless of who we fight, due to our records and our styles of fighting. But as a fighter you can't put that pressure on yourself. You got to go in there and do your best, that's your only obligation. Try to do the things you trained for, and how the fight plays out is a consequence of that. Sometimes it's a war, sometimes it's not that much. Regardless of how this rematch goes, nothing will take away that (first) battle from UFC history and that's how it goes in life, we are always writing new stories.”

Just like the first Henderson-Rua fight, after a statement like that, there’s nothing more to be said.