"Like I always say, I go in there to try to finish the fight, and I
think the fans and the UFC recognized that, which is a great source of
motivation." - Mauricio "Shogun" Rua 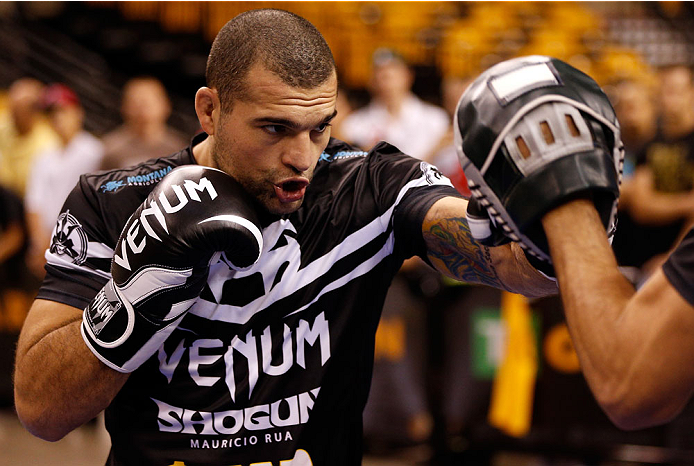 Anytime you lose two consecutive fights in the UFC, it’s a big deal. When you’ve fought the best of the best for the majority of a career that spans over a decade and engaged in your share of wars over that time, it turns into headline news.

So as he gets ready for his UFC Fight Night co-main event bout against James Te Huna this Friday night (Saturday in Australia), Mauricio “Shogun” Rua knows what people are saying after back-to-back defeats against Chael Sonnen and Alexander Gustafsson.

“There is always pressure when you fight, especially in the UFC, where the best fighters in the world compete,” said Rua through translator Eduardo Alonso. “There's no such thing as an easy fight in the UFC and all fighters knows that. Anyone can beat a top 10 fighter on a good day. It's so competitive. I'm used to pressure though, as I have been in big fights for pretty much all of my career.”

There’s no disputing that, and it’s been his willingness to face all comers night in and night out that has made the former UFC light heavyweight and PRIDE Grand Prix champion a revered figure among fans, win or lose. That kind of support hasn’t gone unnoticed by the Brazilian either.

“The support from my fans and my love for fighting is what keeps me motivated,” he said. “I'm still young and I'm a competitive guy. I love fighting and I always want to give my best. Sometimes things won't go your way and a lot of things happen in training camps that fans would never know, so it's hard. However, when I see the support from the fans, it really gives me a reason to keep going and I know I still have a lot to do in this game.”

At 32, Rua is young. But have the wars with the likes of Dan Henderson, Rogerio Nogueira, and Brandon Vera, added a few years to that odometer? Against Gustafsson last December, Rua looked listless en route to a three round decision loss. Against Sonnen in August, it ended too quickly to get an accurate read. But while Rua will insist that he still has plenty of gas in the tank, one thing he won’t do is blame his losses on anything but his opponent simply being better on that particular evening.

“He was the better fighter that night, he caught me in a choke early on and that's it,” said Rua of the Sonnen fight. “I can't take credit away from him, and there's no need for excuses when you lose. All I can do is work hard, and do my best in my next fight.”

If Rua is still a force to be reckoned with at 205 pounds, the Te Huna fight will tell the tale, and in terms of a perfect style matchup, Te Huna is it. He’s not a giant like Gustafsson and he’s not a wrestler like Sonnen. The Aussie favorite is going to march forward and throw hands. And that’s just what Rua craves in an opponent.

“Every fight is difficult and Te Huna is no exception,” said Rua. “He is a very tough fighter, very strong, likes to strike, has great boxing and is always a solid wrestler with heart and cardio. I think he is a very tough fight wherever the fight goes, and I have to be prepared for all.”

The bout will also mark Rua’s debut in Australia, and for the UFC’s first event in Brisbane, they turned to a proven star in Shogun to be in the co-feature. That shows a lot of faith in Rua, even after some rough recent outings. Again, it’s something that the Curitiba product appreciates.

“I really feel at home in the UFC and also appreciate the support from the fans who want to see me fight,” said Rua. “I received a lot of messages from the Australian fans as well, saying they were so excited to have a chance to see me fight live, and that means a lot. It motivates me. I used to say that first, when I went from PRIDE to the UFC I felt a little different, but soon I started to feel home at the UFC, as I could see they appreciated my fighting style. Like I always say, I go in there to try to finish the fight, and I think the fans and the UFC recognized that, which is a great source of motivation.”

You can almost imagine the roar should Shogun recapture his past form and not only beat Te Huna, but finish him. It would be the perfect way to end what has been a tumultuous year for the veteran standout, and while he would agree with that sentiment, only after the fight is over will he afford himself the luxury of planning out 2014.

“This was a very different year, with some difficult things happening,” he said. “I had to make a lot of changes in my professional life, had a fight (with Nogueira) cancelled after a whole training camp, and then had to jump on a completely different fight and ended up with a setback. That led me to some more changes and I can't focus on 2014 yet as I still have a task ahead. I want to do my best and then I'll think about next year.”

A MIDDLEWEIGHT FUTURE FOR SHOGUN?

Much has been said about a rumored drop from 205 pounds to 185 for Rua in the future, especially if he loses to Te Huna this week. But as Rua makes clear, this is far from a done deal.

“People have been asking me this question for years, and sometimes they read too much into my answers,” he said. “The reality is that in theory it could maybe happen one day, but it's not something I gave a lot of thought to yet, and I would have to discuss it with my team. Right now I'm focused on light heavyweight, as I have a big fight coming up and it would be foolish to focus on anything else.”