Shogun Reloads for Gustafsson and a Big 2013

"If you want the belt back you can't think about some time off. I'm a fighter that must be fighting." - Mauricio "Shogun" Rua 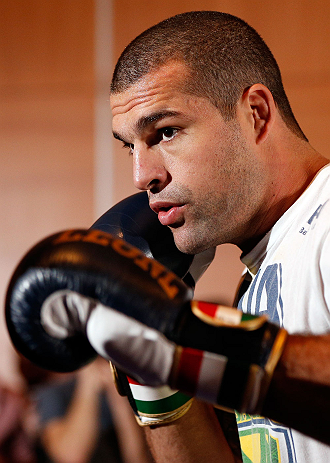 It’s not easy being Mauricio Rua. Not when you’ve been at the top of one of mixed martial arts’ most high-profile divisions for nearly eight years. That’s eight years worth of fights with the likes of Rampage Jackson, Mark Coleman, Alistair Overeem, Rogerio Nogueira, Forrest Griffin, Chuck Liddell, Jon Jones, Lyoto Machida, and Dan Henderson, just to name a handful.

In other words, there have been no nights off for Rua over that span of time, and while the rewards have been great, being the man with the bull’s eye on his back can be draining and pressure-filled, with the wins being celebrated and the losses perceived as signs that the end is near. But at 31, Rua has accepted the good with the bad, choosing to dismiss both in order to focus on just one thing: being ready to fight when his name is called.

“I always deal with pressure,” said Rua through manager / translator Julio Heller. “In this sport one day you are the champion, on the other you can be at the end of the line. I think that to keep a good performance you must put aside this pressure and focus on the next fight. I always think about doing my best in respect to my fans; the result is just a consequence. But I'm proud about t my career and I know that I can do much more.”

The next fight for Rua comes this Saturday in Seattle, and again, it’s no easy night, as he takes on rising star Alexander Gustafsson in the UFC on FOX 5 co-main event. On paper, this one will be another war to remember for Rua for as long as it lasts, and if you ask him, he plans on making that paper come to life.

“He is a striker like me,” said Rua. “And he’s very tall with long arms. I already have a fight plan; I will tell you next Sunday.”

Rua laughs, relaxed and at ease before what is a pivotal fight in his career, one that could propel him back into a title fight with the man who took his belt in 2011, Jon Jones, if he is victorious. That’s certainly the plan for the Curitiba, Brazil native, who says “for sure” when asked if he believes a win over Gustafsson secures him a championship fight.

But given Gustafsson’s rapid rise to the top and Rua’s two lengthy wars with Dan Henderson and Brandon Vera, the pre-fight talk has centered on this being Gustafsson’s coronation as the next in line to challenge Jones while we see what Rua has left in the tank. It’s almost insulting to the Brazilian superstar, who competed in one of MMA’s greatest fights ever against Henderson in November of 2011 before losing a close decision and then went to battle for nearly four rounds with a resurgent Brandon Vera in August before stopping “The Truth.”

The Henderson fight, no one complained about. The one against Vera, fans looked at the fight more as Rua not being in top-notch form than Vera delivering a career-best performance. Rua wasn’t surprised with the Vera he got on fight night.

“No, I know that Vera is a great fighter,” he said. “Some fans and some people in the media underestimate him, but he deserves respect. I remember that Dana said in the post fight interview that was the best Vera fight in the UFC, so for me it just gave more value to my victory.”

Going nearly nine combined, grueling rounds in his last two fights should have also earned him a nice break, but that’s not what Rua wants, not by a long shot, so he’s back, four months after Vera, and he’s raring to go.

“If you want the belt back you can't think about some time off,” he said. “I'm a fighter that must be fighting, so give me "rhythm"; the most important thing is to follow at least a three months camp for a fight.”

He got what he wished for this time around, but that’s not to say it’s easy, especially after 27 fights, most of them waged against the best competition available at 205 pounds. But he’s found the way to keep things fresh for himself as he gets his second decade as a pro mixed martial artist underway.

“It's not easy, but it’s important to have a good team, the right people around you, family support and the real fans that keep me motivated.”

Those fans, who will be out in force in Seattle this weekend or in spirit around the globe, will do their best to make the affable Gustafsson uncomfortable once the bell rings at Key Arena. Rua will do the same, not just with his fists and feet, but with the experience that Gustafsson can’t hope to match at this point in his young career. Remember, when Rua was turning pro, “The Mauler” was just 15 years old.

“Experience is something that you bring with you from all fights,” said Rua. “I passed through so many different situations in my career that I learned a lot from, and they help me to face the future. Gustafsson’s coach said that I'm the past and he is the present, but he is wrong. I'm only 31, I was champion in PRIDE when I was 23 so it’s that background that I must bring with me. I know that my best is still to come and I will start to prove it on Saturday.”

On the downside? Not Shogun Rua, who promises not just a win this weekend, but an even bigger 2013.

“Right now I'm just thinking about my next fight,” he said, “but in 2013, the fans should expect my best and me getting the belt back.”