“Being a champion means a lot, but not because you are better or worse than others, but because it means you reached the biggest goal you can have as a fighter.” - "Shogun" Rua 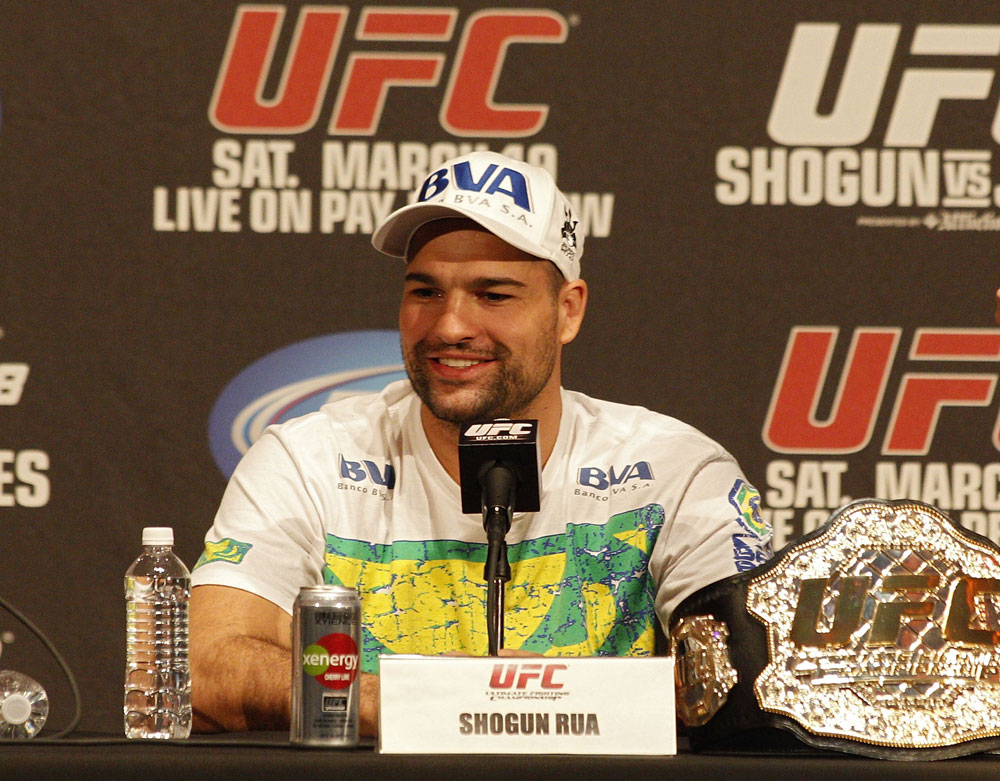 He’s far from ancient at 29 years old, but UFC light heavyweight champion Mauricio “Shogun” Rua remembers how it felt to be 23, like his opponent this Saturday, Jon Jones.

Back then, in 2005, Rua was the sport’s phenom, the wunderkind who blasted through all comers. In Rua’s case, those opponents had names like “Rampage”, Nogueira, Overeem, and Arona. It was a Murderer’s Row to end all Murderer’s Rows, but Rua not only survived, he won each and every bout on the way to the PRIDE middleweight Grand Prix title.

Not bad for the kid, who recalls that some of his toughest fights weren’t in the gym, but in the Chute Boxe Academy in his native Curitiba.

“I remember that training everyday at my academy was tougher than anything else (Laughs). Back in those days at Chute Boxe there were a lot of tough fighters, and usually you would get a tougher time in the gym,” said Rua through manager / translator Eduardo Alonso. “Watching Wanderlei Silva training every day, and sparring with him, inspired me to believe in myself and want to conquer my space. My coaches always made me believe in myself, and I felt I was capable of beating anyone. I entered the PRIDE Grand Prix considered the least favorite out of 16 to win the whole thing, that really motivated me a lot, as I don't mind when people doubt me; it just motivates me to work harder.”

Nearly six years after that first Grand Prix victory, a first round TKO of future UFC light heavyweight champion Quinton “Rampage” Jackson, Rua, despite being a world champion, finds himself in a similar position as he defends his title not as the favorite, but as the underdog to Jones. It’s familiar territory for Rua, yet he shrugs off the perceived slight, even as some observers believe that a title fight for Jones may be too much too soon.

“I don't think it's too soon for him because he is the number one contender, and he earned himself this spot so it should be the right time,” said a gracious Rua. “Only when the fight is over can we tell something differently, but he earned his respect and his chance.”

It’s the quote of a dignified champion, one who realizes that fights are won and lost in competition, not in press conferences or on internet message boards. It’s also the mindset of someone who has walked through the proverbial fire to get to where he is today. For all his early success, Rua has suffered more than his share of setbacks since then.

There was the freak elbow injury against Mark Coleman in 2006 that produced his lone PRIDE loss, his submission defeat to Forrest Griffin in his UFC debut in 2007, his controversial first fight with Lyoto Machida in 2009, and most devastatingly, the multiple knee surgeries that would have finished off most fighters. Yet Rua, now healthy for the first time in years, has used these bumps in the road as motivational tools.

“Experience is a very important aspect for a fighter,” he said. “Going through all I went through, I see myself as a much more experienced and complete fighter nowadays. The game is always changing and evolving, so I really feel like I'm always improving. Experience can come in many different ways though - from fighting, but also from life, training, etc; it's not only a matter of age.”

Rua is a husband and father now, his knees are in working order, and after a rocky start, he re-established his dominance in the MMA world in a new venue – the UFC Octagon. And if there was one moment along the way that captured Rua 2.0, it was his rematch victory over Machida at UFC 113 last May. There would still be one more knee surgery to get through, but there was little if any pain after he knocked his countryman out at 3:35 of the first round to win the UFC light heavyweight crown.

“It's even hard to describe what was going through my mind after the fight,” said Rua. “I was very happy and it's just an overwhelming feeling of satisfaction. You think of all you went through to get there and you just want to celebrate the moment with your family, friends and fans.”

“Winning a title is always very satisfying, but only those close to me know the roller coaster we went through to get there,” he continues. “So it certainly had a sweeter meaning, and it shows that you have to always keep fighting to reach your goals and dreams.”

Back home in Brazil, fans, friends, and family greeted him at the airport, a congratulatory billboard was erected in his honor, and a barbecue and party awaited him in Curitiba. The local hero had made the comeback all his supporters knew he had inside of him, and now…he was a world champion.

“Being a champion means a lot, but not because you are better or worse than others, but because it means you reached the biggest goal you can have as a fighter,” he said. “You work your whole life to become a champion, so it gives a sense of reward and accomplishment for all that you fought for.”

What made the Machida victory even sweeter is that it justified the diehard support Rua had received from fans who stuck with him through good and bad. It’s as if Rua wasn’t your typical athlete with fair-weather fans who jumped on and off the bandwagon with frightening regularity. If you were a “Shogun” fan, that was for life. Such devotion didn’t go unnoticed either.

“Having support from the fans in the hard times means a lot,” he said. “In the end, this is why you go through all the pain and all the sacrifices a professional fighter has to make. Just training every day, when you are tired, bored, is already tough. To recover from injuries and keep going is a true mental challenge at times, and knowing that there are people who want you to do well, that you are able to bring some joy to them, really pushes you through the hard times.”

And now there is Jon Jones. The upstate New York native has made it look easy in his UFC career thus far as he’s compiled a 6-1 record (the only loss a controversial DQ against Matt Hamill) with wins over the likes of Brandon Vera, Vladimir Matyushenko, Stephan Bonnar, and Ryan Bader. Rua is impressed, but ready.

“I think Jon Jones is rightfully the number one contender right now,” he said. “He has been coming off a series of solid wins, and he is a very talented fighter. He is a complete fighter with skills in all areas, and a fight is a fight. Any time you step inside the Octagon to fight there can be many difficulties and you just never know, so that's why you’ve got to be prepared for all possible situations.”

Rua has seen all possible situations. He’s been through the worst pains of injury and defeat, he’s had the highest highs as a UFC and PRIDE Grand Prix champion, and he’s fought every conceivable style, from lanky strikers and world-class wrestlers to jiu-jitsu savants and one-strike knockout artists. He’s even been the young gun, the phenom, the fighter the world embraced as the next big thing. Yet through it all, he kept things in perspective, and he still does.

“I never thought I was invincible,” said Rua. “There's no such thing as an invincible fighter. Every fighter can lose if a good punch connects, or if your opponent is having a better day. I was always very confident in my skills because my coaches always built my confidence and got me to believe in myself. Mindset is a very important aspect of a fighter's game, and so is respecting your opponents. The more you respect your opponents, the more you are going to work hard and develop yourself and use your confidence in the right way.”

“A fight is a fight and many things can happen,” he said. “You only know as the fight starts. I worked on a game plan with my team, but you have to be prepared for many different situations that can happen in a fight. As always, the only pressure I put on myself is to do my best, the rest is a consequence.”