Shogun to let his fighting do the talking in Hamburg

Mauricio “Shogun” Rua might have never competed in Europe throughout his storied MMA career, but he’s no stranger to Germany.

“I’ve actually been here before; I’ve been to Berlin and Munich and I’m very happy to be in Hamburg now,” the light heavyweight legend, who fights Anthony Smith on Sunday in the main event of UFC Fight Night Hamburg, said about two tourist trips he made with his wife and his brother. “It has been a few years, around eight years. It was very nice, I always wanted to visit Germany; it was a very good experience.”

Eight years ago, “Shogun” was also the UFC’s champion at 205 pounds. He lost the belt in 2011 against a young phenom named Jon Jones and never got within reach of his old belt again. So, with Germany as his good luck charm, could that once more be a sign for big things to come? It might just be, but that’s not what’s on Rua’s mind right now.

“I won’t do any more sightseeing here, I’ll go straight back home, because I really don’t want to make plans for after a fight,” he said. “So, I’ll head back home as soon as possible. But, who knows, maybe I’ll come back one day to Hamburg just as a tourist.”

But that’s in the future, and anything that’s in the future is blocked out of Rua’s mind unless it has to do with stepping into the Octagon on Sunday and fighting Smith. No, he doesn’t really care where this fight is going to put him in the rankings with a win and no, he also doesn’t pay too much attention to Daniel Cormier, the man who now owns the light heavyweight title and who recently made headlines by saying he’d like to fight “Shogun” as one of his last opponents before retiring next March.

“I saw what Cormier said as motivation, but, as I said, I can’t be thinking about that”, he insisted. “It’s impossible to think about that when I’ve got such a tough opponent like Anthony Smith. Now, my focus is a hundred percent on Anthony Smith and then after the fight, I’ll think about it.”

With Smith, Rua might have met a blessing in disguise when the young veteran replaced former title challenger Volkan Oezdemir just a few weeks out from the fight. Initially, the late switch seemed like an annoying distraction. But then, Oezdemir was moved to UFC 227 in August to fight Alexander Gustafsson before promptly getting injured, leaving Gustafsson without an opponent and Rua still as the main event of UFC Fight Night Hamburg.

“I’m a Christian, so I put everything in the hands of God, so who knows [if the switch was a good thing]. If God wanted it that way, maybe it was supposed to be that way. I’m tranquil and I’m cool with it.”

That tranquility will come to an end on Sunday night, though. With both fighters being known for both long, drawn-out standup wars and quick, jaw-dropping knockouts, their business meeting inside Barclaycard Arena’s most exclusive VIP lounge on Sunday night looks like it can’t end up as anything other than a glorious spectacle.

That’s motivation enough for the Brazilian, who doesn’t care that in his most recent fights, he had to fend off the attacks of the next generation by beating Corey Anderson and Gian Villante – both younger fighters looking to make their names off beating a legend like the PRIDE and UFC standout.

“Throughout my career, I always fought the best,” Rua said. “And those guys, Corey Anderson, Anthony Smith, they’re among the best. They’re very good fighters and I always fight the best. So, for me, it’s the same thing, really.”

On the downside, one loss against a young, hungry lion can trick the fanbase into believing that it’s time for you to retire or even that it would’ve been that time long ago. But, once again, those claims don’t have any effect on his performance in his next fight, so Rua doesn’t let himself get distracted by anyone’s opinion. 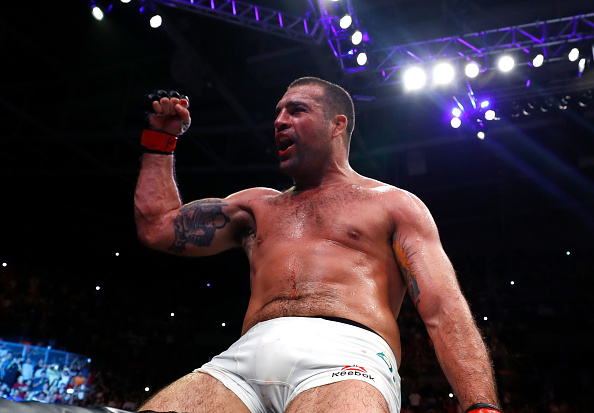 “I think this is a very personal thing, and every fighter has to know and decide when to retire and when to stop,” said the 36-year-old, whose age still seems puzzling given that he seems to have been around in the game forever. “I think people expect a lot from me. They always expect the very best and, sometimes, when you don’t perform to the very best, they call for you to retire.

“But that’s kind of silly in a sense, because it can’t be that way. You don’t see a doctor who maybe one day does a surgery that is not as perfect as the last one and he wants to retire because of that. So, I understand that people are passionate, but I think it doesn’t make sense and I think that that’s a personal decision.”

With that being said, “Shogun” will do what he does, step into the Octagon, and let his fighting do the talking. Now back in the country he last visited when he was a champion, maybe that lucky charm will push him to a title shot once more.