The exchanges started as soon as the two engaged, with Rua sharp early. But in the second minute, a 1-2 from Villante found its mark and staggered the Curitiba native. After a brief clinch, Rua’s head was cleared and he marched forward with accurate shots, the crowd roaring with every swing. With 1:45 left, a right hand by Rua produced a flash knockdown, but the New Yorker was able to rise and make it out of the round.

Both fighters continued testing each other’s chin in round two, and while Villante closed the gap a bit, it was another round for Rua.

In the opening minute of round three, a right hand from Rua rattled Villante, and this time the gritty New Yorker couldn’t recover, with a follow-up barrage putting him on the deck and prompting referee Mario Yamasaki to stop the fight 59 seconds into the final frame. 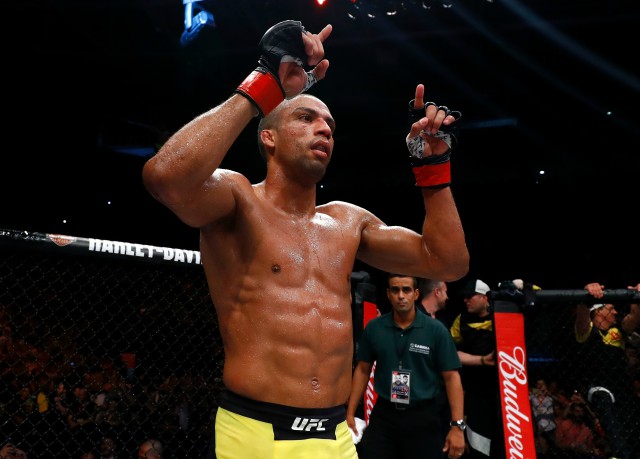 Beneil Dariush looked to be on his way to an upset win in his bout against fellow lightweight contender Edson Barboza, but the Brazilian bomber turned everything around with one shot, using a jumping knee to knock Dariush out in round two.

The two began trading as soon as the fight began, Dariush pressuring Barboza in order to leave him no room to set up his kicks. In fact, it was Dariush landing the majority of leg kicks before going upstairs with his punches. Barboza did get busy in the closing minute of the round, but it was still Dariush’s frame.

The competitive striking battle continued into round two, but Dariush’s aggressiveness got the best of him as Barboza scored with a flush knee to the head as his opponent leaned in. That was it right there, as Dariush was out as soon as he hit the canvas, with referee Osiris Maia waving the fight off at 3:35 of the second round.

Albuquerque’s Ray Borg made a major statement in his bout against Jussier Formiga, winning a razor-thin three-round unanimous decision over the highly-ranked flyweight contender.

To no one’s surprise, there was plenty of high-level back and forth action between the two flyweight contenders in the first round and enough swings in momentum that it was hard to determine a winner after the first five minutes.

The pace dipped in the second, but it continued to be a close fight, with Formiga’s hard leg kicks possibly giving him a slight lead.

A wild grappling exchange on the mat kicked off the final round, neither fighter allowing the other to take control. Formiga did take over in the second minute though, as he quickly put Borg down and took his back. Borg eventually escaped and got into the top position, and after several hard elbows, he was able to cut Formiga. In order to escape, Formiga gave up his back briefly, but he wound up in the same position just before the horn sounded to end the fight.

A strong third-round effort from Marion Reneau allowed her to escape Fortaleza with a draw in her bantamweight bout with Bethe Correia.

Reneau was able to hold a slight lead throughout the opening round thanks to some solid body kicks and clinch work, but Correia was never too far behind, and in the closing moments of the frame, a takedown may have evened the 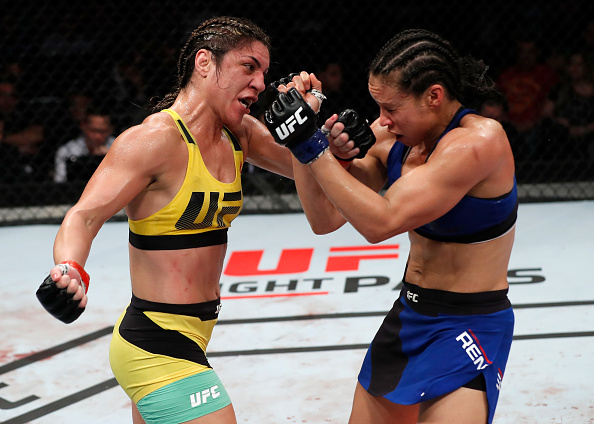 The second was an even better round for the Brazilian, as she landed with several hard shots while standing and even scored another takedown. Reneau stayed busy with her strikes and a submission attempt through, giving the judges even more to think about.

In the opening moments of the final round, a kick to the head by Reneau rattled Correia, and the American went in for the finish. Correia looked to clear her head with a takedown attempt, but Reneau kept firing away with strikes and then moved into the mount position. Correia escaped briefly, but Reneau got back into a dominant spot, eventually taking her foe’s back. Correia was able to survive, but the final round performance from Reneau ensured the draw result.

Alex Oliveira and Tim Means settled their score in welterweight action, Oliveira submitting Means in the second round of their rematch.

An illegal knee by Means rendered their first bout in December a no contest.

Oliveira controlled much of the first round, whether it was at range, in the clinch or on the mat. But a sloppy takedown attempt with 1:30 left allowed Means to reverse position and wind up on top, allowing him to get on the board.

In the second, a back and forth start quickly went in Oliveira’s direction on the mat, with the “Cowboy” taking Means’ back. A rear naked choke soon followed, and Means tapped out, with the end coming at the 2:38 mark.