Shields Looks to Chop Down Woodley in Welter Return

"I think I definitely have to win this fight to stay in the title hunt." - Jake Shields 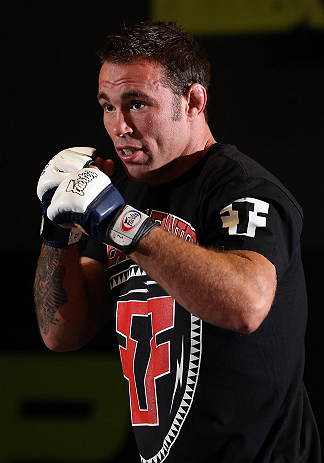 From 2005 to 2010, Jake Shields was recognized as one of the best fighters in the world.

The Californian rose to prominence on the strength of an impressive 15-fight winning streak that spanned two different weight classes and included victories over the likes of Carlos Condit, Yushin Okami, Robbie Lawler and MMA legend Dan Henderson.

During this time, Shields collected championships and critical acclaim, being recognized as one of the best fighters competing outside of the UFC Octagon. In the summer of 2010, the then-Strikeforce middleweight champion jumped ship, joining the UFC and beginning his pursuit of one of the most coveted titles in mixed martial arts in the welterweight division.

The former Strikeforce champion found initial success in his debut against Martin Kampmann at UFC 121, out grappling the Xtreme Couture product in a close fought affair. His victory over “The Hitman” earned Shields a long-awaited opportunity to test his skills against one of the sport’s pound-for-pound greats, Georges St-Pierre. Despite having his moments against GSP, the American Jiu-jitsu practitioner was unable to solve the riddle that is St-Pierre’s rhythm and saw both his winning streak and momentum come to a grinding halt at UFC 129.

Four months after losing to St-Pierre, Shields' father and manager, Jack, died unexpectedly at the age of 67, tipping the Team Cesar Gracie fighter’s life out of balance.

The next two years would bring mixed results as Shields fought to get his career back on track. He defeated Yoshihiro Akiyama at UFC 144, and while his next showing resulted in another victory - this time over TUF alum Ed Herman - the win was ultimately overturned to a “no contest” as the result of Shields failing his post fight drug test.

Nevertheless, adversity has the unique ability to break or motivate an individual and Shields is more determined than ever to get back to the top of the food chain. The 34-year-old has decided to return to the welterweight ranks and will square off with surging upstart Tyron Woodley this weekend at UFC 161.

He knows the hungry prospect that will be standing across from him is not the only challenge he will face in Winnipeg. Shields is eager to reclaim his status as one of the best fighters on the planet and the first step on that journey back to the top will start Saturday night.

“I’m really excited to get back,” Shields said. “I haven’t fought for about eight months now and I’m really hungry. That layoff I went through was good for me. It made me miss the sport and made me hungry again. I just can’t wait to get back in there.

“It’s definitely taken a while for me to get back to feeling like myself. I may have done a few things wrong in my training and the loss of my dad was obviously tough. But this camp is the best I’ve felt in years. I felt like I’ve gone back to basics and I’m hungry again. Hopefully that training transitions to my fight and I can go out there and put on an amazing performance.”

The former welterweight contender will face a difficult task in Woodley at UFC 161. The prospect turned Strikeforce title challenger has only been defeated once in his professional career and is coming off a thunderous debut knockout victory over veteran Jay Hieron.

The former wrestling standout from the University of Missouri brings a solid mixture of power grappling, put away power and athleticism to the table. In addition to his skill set, Woodley is also displaying no shortage of bravado as he’s taken to Twitter and interviews letting fight fans know how he plans to finish Shields in their bout. Nevertheless, throughout his career Shields has faced the best of the best - in all aspects - and is looking forward to mixing it up with the up and comer.

“Woodley is a great wrestler but I’ve faced great wrestlers before,” Shields said. “People forget that I took Dan Henderson down five rounds in a row and did the same to other great wrestlers in our sport. I definitely respect Tyron Woodley as a fighter but I know I can go out there and beat him.

The bout between Shields and Woodley comes at a very important time in the welterweight division. While there is yet to be an official date, champion Georges St-Pierre is rumored to be facing number one contender Johny Hendricks later this year and a handful of potential contenders are also stepping into action over the next several months.

If Shields is looking to get back to the top of the ladder, there is no room for error and this puts an emphasis on his upcoming tilt with Woodley.

“I think I definitely have to win this fight to stay in the title hunt,” Shields said. “Woodley is a really tough opponent but it’s a fight I need to win. Woodley is tough and he’s coming off a huge win. I’ve also done a lot in this sport. I’ve won a few titles, won my last couple of fights, and we are both looking to get into the title hunt. The winner of this fight will be in that title picture. I need to win this fight and preferably do it in impressive fashion, and that will put my name out there somewhere close to a title shot.

“I really feel this is the year I can get back to the top. I’ve made some changes as the result of everything I’ve went through the past couple of years. My head is on right and I want to go out there and do some damage. That is going to start with Tyron Woodley.”