Shields Hopes to Kick Off 2012 on A High Note

“As a kid I was always told that I couldn’t be an athlete and a vegetarian, and I like to show that that’s a myth." - Jake Shields 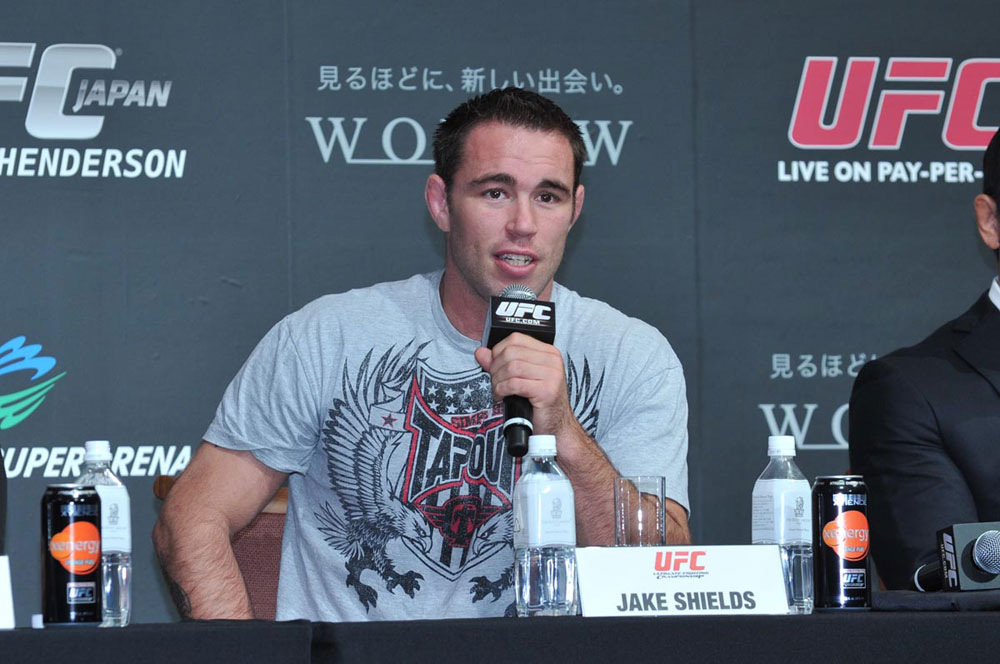 Throughout his life, Jake Shields heard about everything he couldn’t do as a vegetarian in the sports world. He never wavered though. Instead, he just kept piling up accolades: All-American recognition as a wrestler at Cuesta College, a jiu-jitsu black belt, and MMA titles in a number of organizations, including Strikeforce, EliteXC, and Shooto.

Today, he’s a UFC welterweight contender, and those people talking about his diet have gone silent, instead giving way to praise from the organization PETA2 (the young adult branch of the animal rights organization), which honored Shields in 2010 with a Libby Award as the year’s Most Animal-Friendly Athlete, beating out Strikeforce contender KJ Noons, New York Knicks star Amar’e Stoudemire, and WNBA standout Candace Parker.

“They heard I was a lifelong vegetarian, so they wanted to do some work with me,” said Shields of his initial work with the group. “And I’m a lover of animals, so I agreed and I’ve done some small campaigns and stuff.”

Now he’s looking to make it two in a row, as he’s up for the award again, this time squaring off against NFL running back Willis McGahee, Phillies second baseman Chase Utley, and WWE wrestler Daniel Bryan. But beyond awards, this is a cause close to the 32-year old’s heart.

“I think it’s important,” he said. “As a kid I was always told that I couldn’t be an athlete and a vegetarian, and I like to show that that’s a myth. I’ve been a lifelong vegetarian and a successful athlete, and it’s good to show people an alternative. I’ve never been a preachy type person and I’m never gonna tell people what they should and shouldn’t do. But I like to be an example for people that are interested in that lifestyle, and let them know that they can, because so many people have the opposite impression.”

Classifying himself as a vegetarian even though he tries to eat mostly vegan, Shields has maintained this lifestyle throughout his life, which can’t be easy, especially when you’re growing up and your buddies are all running to the local fast food spot for a bite to eat.

“I just wouldn’t eat, or I would find something else to eat,” said Shields, who also admits to never eating an entire steak.

“I’ve had a couple bites once or twice in my life, but I’ve never really eaten it,” he said. “Actually I got sick. In my opinion meat’s really hard on the body, so my body didn’t react good to it.”

He wouldn’t change a thing though.

Easy wouldn’t be the way he would describe 2011, a year in which he not only lost back-to-back bouts against Georges St-Pierre and Jake Ellenberger (breaking a 15 fight winning streak), but lost his father Jack, who sadly passed away in August at the age of 67. Despite his dad's passing, Shields courageously went on with the Ellenberger fight just a few weeks later, only to get stopped in the first round.

“It’s just one of those things,” he said. “I got a little anxious out there and kinda walked into a knee, and it could have happened at any time. Obviously, things possibly could have been different, you just never know. Jake’s a good power puncher and one of those guys you make one mistake and you can walk into something.”

Undeterred, Shields will get his chance to rebound early in the New Year, as he will travel to Japan to take on Yoshihiro Akiyama at UFC 144 in February. Having fought three times in the Land of the Rising Sun on 2004-04, he’s got an edge on some of his peers who have never competed there, but that doesn’t mean it’s any easier.

“It’s tough dealing with a long flight, and being vegetarian, it’s hard finding food to eat over there, but it’s one of those things you just deal with,” said Shields, who will be welcoming Akiyama to the welterweight division for the first time.

“He’s a tough guy and I’m not taking him lightly,” said Shields of Akiyama. “He’s coming off a couple losses, but he’s lost to good competition and he’s had some close fights with some top fighters, so I’m taking him really seriously. He’s a phenomenal judo guy, possibly the best judo guy in the sport, and he’s also got heavy hands. I haven’t had a chance to study his tape yet, but I’m gonna start breaking that down and coming up with a game plan.”

It’s the kickoff to a year he can’t wait for.

To vote for Jake Shields for the 2011 Libby Award as Most Animal Friendly Athlete, click here. Voting closes on December 23