It was assumed that if Saturday’s main event clash between top bantamweight contenders Valentina Shevchenko and Julianna Pena went to the ground, it would be Pena’s fight. Instead, it was Muay Thai specialist Shevchenko that emerged victorious on the mat at Pepsi Center in Denver, as she submitted Pena in the second round to cement her No. 1 ranking at 135 pounds and likely set up a rematch with champion Amanda Nunes.

“Many people asked me before the fight, ‘Valentina, you are a striker, Julianna is a wrestler; how are you going to deal with this?’ Every time, I said, ‘Yes, I’m a striker, but I am an MMA fighter and I am a complete fighter,” said Shevchenko, who got the wheels turning in the Octagon for a title fight with Nunes, who decisioned her in March of 2016.

“I’m pretty sure the next fight will be a title shot and I’m very excited to take the rematch and take this belt,” she said.

“You’re not gonna do it,” Nunes countered. “We’re gonna do it again and I’m gonna finish you.”

“Be careful with your words, because every time it’s going to come back to you.” 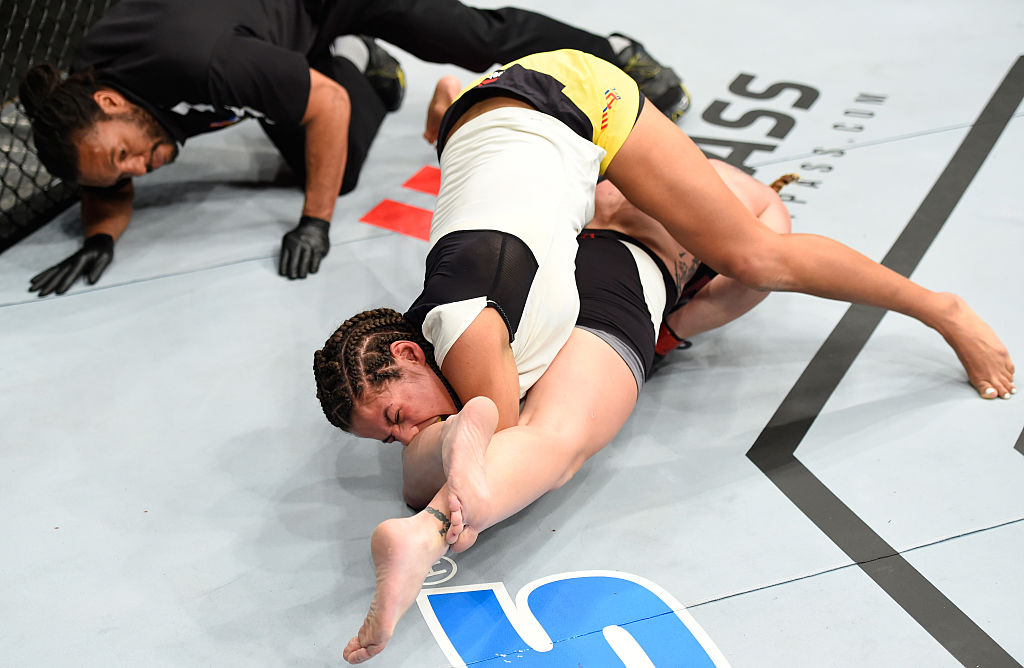 To get to this point, Shevchenko first had to subdue the No. 2-ranked Pena, who initiated a clinch to start the fight and scored with several knees before Shevchenko took her opponent to the mat in the second minute. Pena got up quickly, remaining locked on to her foe as she kept firing off knees. Another Shevchenko takedown followed midway through the round, and this time “Bullet” was able to get off several hard punches as she pushed Pena to the fence. In the closing moments, Pena tried to lock up Shevchenko’s arm, but she was unable to do so before the round ended.

Going all in for the takedown as she locked Shevchenko up in the opening moments of round two, Pena came up short as she wasn’t able to muscle the Kyrgyzstan native to the mat. The two remained tied up while standing, Pena staying busy with close-range strikes. Pena got the fight to the mat briefly, but Shevchenko refused to stay grounded. The second time the Washington native tried to drag Shevchenko to the mat though, she got her takedown and began letting go with ground strikes. Yet in the final minute, Shevchenko turned the tables, suddenly locking in an armbar that shocked Pena and the crowd, producing a tap out at 4:29 of the second round.

With the win, Shevchenko ups her record to 14-2; Pena, the Ultimate Fighter 18 winner who was previously unbeaten in four UFC bouts, falls to 9-3.