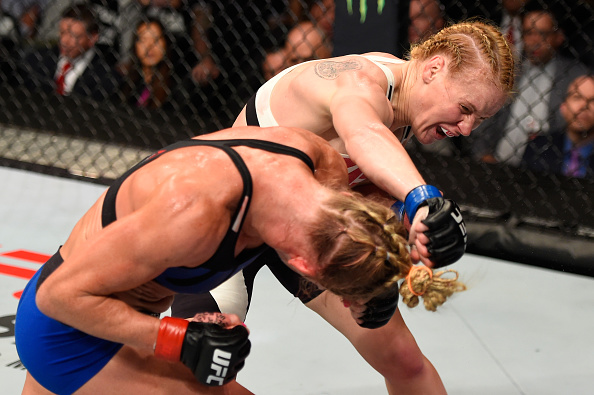 A year ago, Valentina Shevchenko was hoping for a call from the UFC. Saturday night at the United Center in Chicago, the Peru-based striker may be in line for a shot at the UFC women’s bantamweight title after outpointing former world champion Holly Holm via unanimous decision.

“My strategy was to do everything I know, to put all my heart, all my power, everything I learned in more than 20 years in martial arts, and I did it,” Shevchenko said.

Now winner of two of her three Octagon bouts, she hopes to face off with the woman who handed her that lone UFC defeat, newly crowned champion Amanda Nunes.

“Amanda is a good fighter, she has a good standup and ground game, and of course I want a rematch for the title belt,” the No. 7-ranked Shevchenko, now 13-2, said.

“I knew she was a counterpuncher, we were ready for that; she’s a tough girl, I knew that,” a gracious Holm, now 10-2, said. “I knew I had my hands full with this fight. I knew it was a really big challenge. What can you do? I knew it was a competitive fight. I could have done more, I’m disappointed in myself, and I take nothing away from her. She was very tough.”

Kicks were the order of the day for both fighters in the early going, with Shevchenko landing a couple hard punches before Holm landed with a right hand that produced a flash knockdown with three minutes left. More stunned than hurt by the blow, Shevchenko got back to her feet and back to business, scoring a takedown with 90 seconds left. Holm rose quickly, but the two remained locked up against the fence, the No. 2-ranked Holm dictating the action until they broke with a few seconds left in the round.

There was little significant action in the first two minutes of round two, both respectful of the other’s attacks. Shevchenko eventually began scoring with both hands and with inside leg kicks, forcing Holm to take the role of aggressor in the closing stages of the frame, a role that was playing into Shevchenko’s hands.

Shevchenko continued to get the better of the exchanges in the third, and she then scored two takedowns.  On the ground, “Bullet” pressed her advantage, pushing Albuquerque’s Holm, who was cut over the right eye by a clash of heads, to the fence and keeping her there for the rest of the round.

Holm began to show a sense of urgency in the fourth, only to have much or her charges countered. Even when she landed solid shots, Shevchenko made it a point to throw back combinations in return.

Little changed in the fifth. If anything, Shevchenko fought as if she was trailing on the scorecards, as she kept nailing Holm with a variety of punches and kicks while Holm was unable to score with the flush shots needed to put the Kyrgyzstan native on the defensive and turn things around.