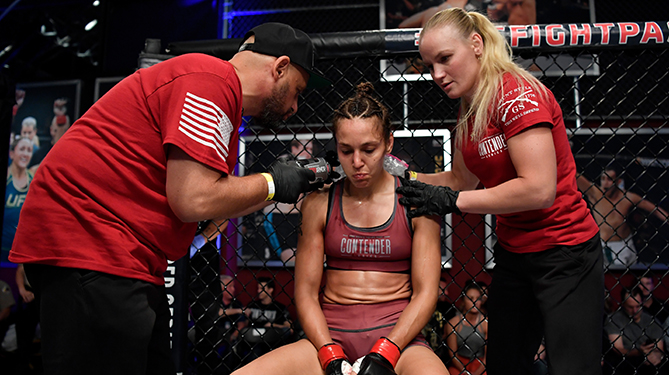 History was made last week inside the Ultimate Fighter Gym as, for the first time, all five bouts on Dana White’s Tuesday Night Contenders series ended with in-fight stoppages, as Dwight Grant, Ryan Spann, Austin Springer, Anthony Hernandez and Matt Sayles stepped into the Octagon and turned back their respective opponents before the final horn.

With such an amazing collection of performances, it only made sense that White add to the historic night by handing out four contracts for the first time, giving Grant, Spann, Hernandez and Sayles the chance to compete in the UFC later this year.

Last week’s tremendous action set the bar extremely high heading into Week 3, but Tuesday’s competitors were up to the challenge.

For the second straight week, all five contests ended inside the distance and White handed out two contracts, adding lightweight Te Edwards and flyweight Antonina Shevchenko to the class of competitors graduating from the Contenders Series to the UFC roster this season, while announcing that heavyweight Josh Parisian would join the cast on the upcoming season on The Ultimate Fighter as well.

A decorated kickboxer and unbeaten as a mixed martial artist, Shevchenko hoped to use this opportunity to join her younger sister Valentina on the UFC roster. Standing in her way was Nievera, a 33-year-old Californian on a three-fight winning streak keen on dispatching “La Pantera” and spoiling her plans for reuniting with her sister on the UFC roster.

Right out of the gate, Nievera looked to take the fight to the floor, but Shevchenko shrugged her off before the two landed in the clinch and the kickboxing standout unleashed a series of knees that all found a home. After a scramble landed them on the canvas with Shevchenko working from top position, they returned to the feet and the Thai clinch, where more knees crashed home, opening up Nievera.

Shevchenko thwarted another takedown attempt and unleashed a series of punches as Nievera was on the ground along the fence, prompting referee Herb Dean to pause the action and allow the doctor to examine the cut. The fight continued and after eating a couple more knees, Nievera ended the frame in top position on the ground.

In the second, Shevchenko forced the fight to stay standing, shutting down all of Nievera’s takedown attempts and punishing her with strikes, finally earning the finish with another torrent of knees from the Thai clinch.

Official Result: Antonina Shevchenko def. Jaimee Nievara by TKO (Knees) at 3:22 of Round 2 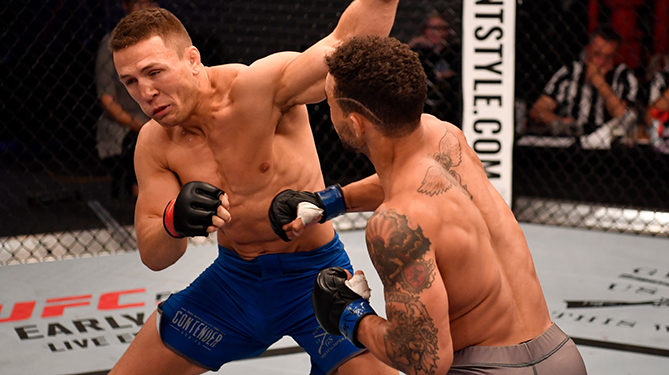 Lightweights from established gyms with solid resumes on the regional circuit clashed as the MMA Lab’s Edwards collided with Tweedy, a 10-1 upstart on a seven-fight winning streak representing the American Top Team affiliate in Indianapolis.

The first real shot Edwards threw brought the fight to a close as he decked Tweedy with a clean right hand before walking off, pantomiming signing a contract.

MMA Lab head coach John Crouch has long talked about the collection of dangerous fighters people still haven’t heard about training down there in Arizona and Edwards was one of them, but after a performance like that, he’ll be unknown no more.

After suffering a loss to Zu Anyanwu on last year’s debut episode, Rebello returned to the New England regional circuit and collected two more victories, setting up a second chance to impress the UFC brass here. Coming off a first-round win in April and having won five of his last six, Parisian was happy to step in and face Rebello, hopeful that he could play spoiler and earn his way into the UFC cage just as Anyanwu did last season.

Not only did Parisian play spoiler, but he thrilled Dana White and everybody else in the process, putting Rebello out with a beautiful spinning backfist midway through the first round.

With Parisian having thrown several spinning kicks earlier in the frame, Rebello was expecting another one to follow as Parisian went into his spin, but instead, the Michigan product planted the back of his left hand on the side of the New Englander’s head, sending him crashing to the canvas.

Not bad for taking the fight on four days’ notice.

Official Result: Josh Parisian def. Greg Rebello by TKO (Strikes) at 1:31 of Round 1

Returning to the TUF gym where he competed as a member of Team Faber on Season 22, Erosa looked to jumpstart a second run on the UFC roster by venturing back to where his first stint on the biggest stage in the sport began. Standing in the opposite corner was Emmers, a talented 28-year-old on a four-fight winning streak that included victories over former UFC competitor Chris Avila and current UFC talent Cory Sandhagen.

Following nearly two minutes of mostly feeling each other out and feinting with their hands down, Erosa and Emmers finally started mixing things up in the second half of the first round, trading good, clean shots and the occasional hard kick. Late in the frame, a short jab from Emmers put Erosa down momentarily, but the former wrestler was unable to follow up.

Erosa came out firing to start the second, drawing Emmers into a slugfest. After getting the better of the early exchanges and backing Emmers into the fence, Erosa uncorked a left high kick that was partially blocked, but still put Emmers on the canvas. Erosa followed him to the floor and landed flush with a quick string of punches, prompting referee Chris Tognoni to wave it off.

Middleweights kicked things off on Week 3 with Caron, an 8-1 East Coast staple who has yet to see the scorecards in his career, squaring off against Williams, who entered on short notice sporting a 5-1 record over his last six, with his only setback coming against Week 2 winner Dwight Grant.

Early in the first, Caron lost his footing on a kick and Williams followed him to the canvas, keeping “The Bear” there for the majority of the frame. Selective with his shots, Williams left Caron with a cut under his left eye and depleted energy reserves after eating a number of thudding body shots as well.

Right out of the chute in the second, Williams stung Caron with a clean left hand before scooping him up and dumping him on the mat with little resistance. Just as he did in the first, Williams picked his spots with his strikes and controlled position throughout. It was more of the same in the third, as the short-notice substitute peppered Caron on the feet before putting him on his back. Late in the frame, with Williams dropping a series of elbows from side position, referee Herb Dean stepped in to stop the fight.

Official Result: Jordan Williams def. Tim Caron by TKO (Elbows) at 3:37 of Round 3