Shevchenko Confident, Not Cocky Ahead of Title Fight 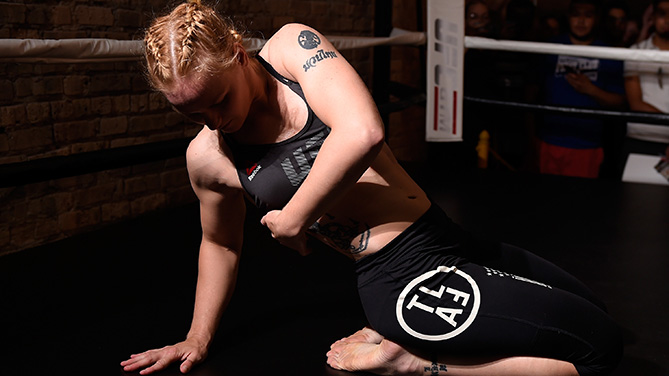 With 17 world titles in Muay Thai and kickboxing already under her belt, Valentina Shevchenko could understandably have an air of “been there, done that” around her as she prepares for her UFC 213 main event against women’s bantamweight champion Amanda Nunes on July 8.

But that’s not the case as she gets ready to go after world title number 18 next week.

“It (winning the title) would be very meaningful for me because I have been training all my life and this is the right moment,” she said. “Here I am and I never stopped going to where I am because my goal is to win the belt and nothing can stop me.”

Her confidence isn’t that of a cocky kid throwing sound bites out to the media. She believes it, and she has the resume to back her words up, both in and out of the UFC. So if the pressure of being on the biggest stage in the sport against a fighter who is seemingly getting better with each fight is getting to her, the Kyrgyzstan native has a poker face Joe Louis would be proud of.

“Maybe I can say it’s because I’ve been in martial arts more than 20 years already,” she said. “I had a lot of competitions and sometimes there was a lot of pressure. I have 17 world championships and I think everything helped me survive under this kind of pressure and attention. This attention for a fighter is always good, but a fighter can’t forget the real things that everybody expects. My goal is only victory and nothing more, and I’m very focused on it. I’ll do everything to help promote the fight and I do everything to put myself in the best condition that I’ve ever been before and, of course, win the fight.”

More than two decades of throwing punches and kicks certainly doesn’t hurt, but Shevchenko, who is coming off back to back wins over Holly Holm and Julianna Pena, can also look back to the third round of her first fight with Nunes. “Bullet” would eventually lose the March 2016 fight to Nunes via unanimous decision, but not before giving the Brazilian a scare in the last five minutes. To most observers, if the fight was scheduled for five rounds, it would have been Shevchenko’s to lose. And lo and behold, the two will meet in a scheduled five-rounder at T-Mobile Arena.

“If I look back to that fight, I would do many things different,” Shevchenko said. “And it’s not only because of the third round. If I had a little bit more time, it would be different, but this time it will be a totally different fight. There are many things that me and my coach are looking at – not just this fight, but a lot more fights of my opponent, and we are working strategy, techniques and everything. So this fight will be totally different.”

Different enough that a new champion will wear the crown? If that happens, everything will change for the 29-year-old, but as she explains, she’s not some wet behind the ears kid.

“I’m ready for everything. I’m not just a sportsman. For someone who is very young and doesn’t have enough experience outside of martial arts, when something comes unexpected, it’s like, ‘Wow, what do I do now?’ But I’m not a girl who was just born yesterday. And all things that will come, I’ve been looking for this. This is what I want. But it will only come with one thing, and that’s victory. That’s why I’m only focused on my fight and my preparation. And what will come after, it will come. But first is the fight.”

First, second and third. That’s all Shevchenko cares about, because she knows that’s how champions are made.

“I can’t say I’m enjoying this now because I have very hard training and every day I have to think about how to survive all my training,” she said. “This enjoyment will come after the event because everything will be finished. But for now, it’s only concentration and hard work.”