Sheldon Westcott: Looking for a Fight

"If you’re better than me, show me, because I’m going to show you when we get in there that I’m better than you." - Sheldon Westcott 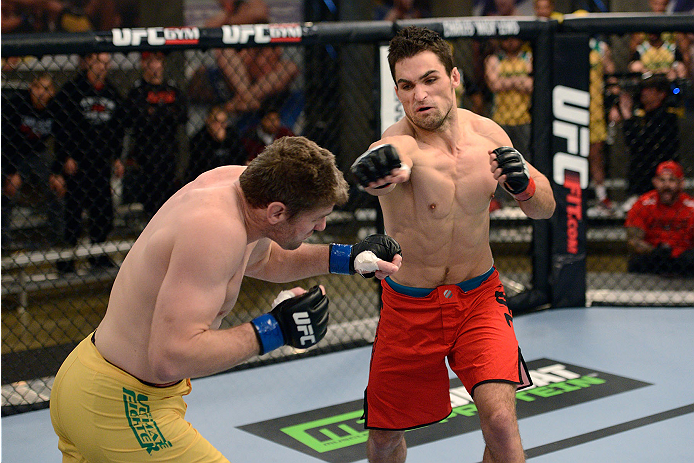 Often, you find out more about a mixed martial artist from instances that have nothing to do with mixed martial arts. The Ultimate Fighter Nations middleweight finalist Sheldon Westcott is a perfect example.

Instance number one: Westcott is an avid wake surfer, a pastime that involves being pulled by a boat at high speeds. On the water. Pretty straightforward stuff until you realize that until fairly recently, he didn’t know how to swim.

“I love being in the water, and I’m not bad, either,” he laughs of his wake surfing passion, which was actually a dangerous one until he took some swimming lessons as an adult. “I can swim a little bit now, so I’m not gonna drown.”

What does this show? Westcott is fearless.

Instance number two: in October of 2011, Westcott, a former track and field standout who migrated to mixed martial arts, was asked to take a pro boxing match. At heavyweight. On three days’ notice.

“It was never really a great idea, but the fight went really well for me,” said Westcott, who stopped Ray Kovinic in 62 seconds.

Revelation number two? Westcott is not just fearless, but a fighter.

With these two traits alone, the Alberta native was going to make noise in mixed martial arts. And he has. On Wednesday though, he can make history as Canada’s first Ultimate Fighter if he defeats his TUF Nations teammate Elias Theodorou.

“Everybody wants to be the first of anything,” he said. “You want to be the first guy to finish a certain type of submission, you want to be the first guy to be a champ on TUF. But in all honesty, I think people have forgotten how important and how prestigious it is to even be on TUF. It still has that meaning to me as it did in the first six, seven seasons, when the guys would come off and they were legitimate guys. I feel like now, some guys say ‘oh, if I’m on the show and I’m this personality, they’re going to take me anyway.’ They don’t care anymore. For me, it’s about the fight. I’m not that guy jumping in front of the camera. It was about winning these fights and putting on a show. And I’m there to finish fights. These guys are trying to fight safe and boring, and I can’t do it. I have one opportunity to fight in front of thousands of people on this show, I’m gonna fight and I’m gonna throw some punches. Let’s go.”

Westcott’s words were not idle ones. Already a fighter with six finishes in eight pre-TUF victories, the 29-year-old continued to take matters out of the judges’ hands on the show, submitting Dan Kelly and Vik Grujic, both in the first round. And to think, he says he didn’t even show off his best during his six weeks in the house.

“When we were training together, I never used any of my ‘A’ game stuff, just because I believed in my team,” said Westcott, one of four Canadians in Wednesday’s two TUF final bouts. “I literally thought it was going to be me, Elias, Nordine (Taleb), and one Australian in the semifinals, so I thought I was going to fight them anyway. I didn’t use any of my ‘A’ game stuff while we were training together because I didn’t want to show them my good stuff. So I was using submissions that are my ‘C’ and ‘D’ game, but I really got to improve those things with the coaching staff and they helped me work out a lot of kinks in my secondary game that really helped me out.”

It’s a testament to Westcott’s talent and athleticism that with such a mindset, as well as injuries, he was still able to make it to the final. But hey, this is guy who at 6-foot-1 can still dunk a basketball, though he does say his vertical leap hasn’t served him well in a fight yet.

Well, there’s always Wednesday night, the official end to an experience Westcott has some mixed feelings about.

“I learned a lot on the show and I took a lot of things away from it that were very positive,” he said. “The coaching staff was phenomenal, but living with 15 guys in a house with no contact with the outside world is something that you never really want to get used to or never want to see again.”

So would he do it again?

“If I lost a whole bunch of fights and it was my way back to the UFC, a hundred percent I’d do it,” he laughs. “Of course I would. It being my option? No.”

It doesn’t look like it will come to that though, as Westcott’s upside in the UFC is considerable, especially since he has a clean bill of health and the desire to make every fight just that – a fight.

“I’m coming to fight,” he said. “If I fight somebody, the people are going to get their money’s worth of a show. If I win a decision, I consider it a loss. It’s not about winning a fight, it’s about putting on a fight, and it’s about fighting. So I would not be pleased if my fight goes to a decision. Let’s see who wins. If you’re better than me, show me, because I’m going to show you when we get in there that I’m better than you.”

Fearless. And a fighter.