"I don’t fight to score points, and I don’t lie in wait for a possible
mistake my opponent is going to make; I go out and try to finish my
fight as fast as possible." - Sheila Gaff 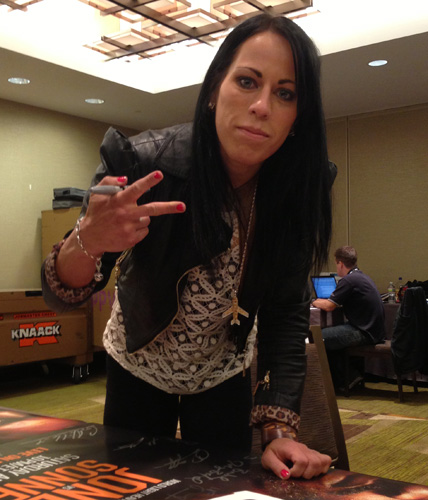 Unlike many of her peers in mixed martial arts, Sheila Gaff didn’t arrive in the sport as an adult. In fact, you could say fighting is in her blood, as evidenced by her training in karate with her father since she was a child.

“I pretty much grew up in the gym, so getting into martial arts myself was just natural for me,” said Gaff, who makes her UFC debut this Saturday against Sara McMann. “I started out doing karate as a kid, from there I moved to kickboxing, and at the age of 16 I already made my professional mixed martial arts debut.”

Now 23, “The German Tank” has the kind of experience that is invaluable in MMA these days, especially when facing off with a former Olympic wrestler in McMann.  But what may set her apart even more from her fellow bantamweights is that she has reached the UFC level while training in a country (and a continent for that matter) that has only begun to embrace the men’s part of the sport over the last few years. For women, it’s even tougher.

“It is very difficult for a female MMA fighter to make it here in Germany, because basically there is no scene over here,” said Gaff through translator / manager Tim Leidecker. “I’ve won Female Fighter of the Year by default for the third year in a row in 2012, quite simply because there is no competition. Domestic events have little interest in promoting female fights, and even looking at the bigger picture in Europe, there is basically just Cage Warriors giving us girls a chance to scrap on a regular basis, with the other organizations just throwing in a girl fight here and there as a special attraction. I sincerely hope this will change now that we also have the chance to go all the way to the UFC.”

It’s as honest an assessment as you will find, and made the odds of Gaff being discovered by the UFC even tougher. With such a long and uphill climb ahead of her, did she ever think of using her gift for throwing hands in another combat sports discipline like boxing, where women have been successful in a healthy German boxing scene for years?

“While it is true that Germany is probably the last major boxing stronghold in the world and has produced several male superstars in recent years, even the best girls had to fight their way through instead,” said Gaff. “Regina Halmich managed to become a crossover TV star, but her successors have not been quite as lucky. Despite being not less talented, Susianna Kentikian, Ramona Kühne and Ina Menzer are currently struggling to find TV channels to air their fights.
This is one of the reasons why I ultimately decided against boxing. The other is that I simply fell in love with MMA at a very young age. It is a very complex sport that pushes me to the limits, both physically and mentally. I quickly became addicted to the hard training and the reward of showing what I had learned inside the cage. Rising above a major challenge through dedication and persistence is simply a great feeling.”

And a bad feeling for those standing across from her on fight night. A pro since 2006, Gaff has learned on the job, winning 10 of 15 bouts, fighting twice in one night on one occasion (and three times in three days), and traveling throughout Europe and beyond in order to get fights. It’s a path veteran male road warriors like Brian Ebersole, Pat Healy, and Chris Lytle could appreciate, and in cases like that, it separates the contenders from the pretenders.

“Even though I’m only 23 years old, I’ve had some tough battles in my young career,” she said. “I’ve fought two Dutch girls in a single night in a tournament in Holland. I’ve taken on Belgian judo international Cindy Dandois out in Finland, and I traveled to the North Caucasus to do battle with a tough Russian girl, Milana Dudieva. I’ve also competed in Dubai for Cage Warriors, which was a great experience. My early career has toughened me up and prepared me to fight on the biggest stage as much as possible.”

That’s a key against the unbeaten McMann, who comes into Saturday’s bout as the favorite due to her swarming ground attack and wrestling ability, both of which could be an issue for anyone considering herself primarily a striker. Offenbach’s Gaff respects McMann’s wrestling, but is quick to point out that she didn’t travel to the United States for a wrestling match.

“Fighting Sara will be a great challenge,” she said. “Her wrestling background is second to none in the world of women’s MMA, but this is not a wrestling match; it is a fist fight. I will fight aggressively as I always do and try to bring the pressure from the opening bell. It’s going to be a great fight and I’m really looking forward to it.”

With two action-packed women’s bouts in the UFC books already this year, the pressure is on for Gaff and McMann to live up to what the Ronda Rousey-Liz Carmouche and Cat Zingano-Miesha Tate fights provided to fans, and as a fan herself, Gaff is well aware of this.

“Not only is it my job to keep up with what the competition is doing, but at the same time I’m also a big fan of all four ladies,” she said. “Rousey against Carmouche was closer than many people expected it to be, but in the end Ronda prevailed due to her technical superiority and her bread and butter move – the armbar. Zingano and Tate, well, that was just a good old fashioned barroom brawl. Miesha was dominating early on with her wrestling, but Cat weathered the storm and came back with a vengeance. The finish was just brutal.”

If anyone knows about emphatic finishes, it’s Gaff, who has ended all of her wins in the first round by knockout or submission. And if she has her preference, it would probably be the KO, especially since four of those victories have come in eight, ten, and 30 (twice) seconds. In other words, she is one of the rare female fighters with legitimate one punch stopping power.

“I’ve always done really well in the standup department and was getting stoppages from strikes early in my career as well, but I only really came into my own as an elite-level striker in 2011,” she said. “The year before really did not go well for me with a few tough losses, some controversial, some stupid. I was frustrated and changed my game to become even more aggressive and even more precise with my striking. I worked countless hours on my combinations with my coach Andre Balschmieter and that paid off: I won the next three fights by way of knockout in a combined 112 seconds.”

Excited yet? You should be. You should also keep your eyes fixed on the Octagon when Sheila Gaff is in there, because it might not last long.

“This is something that’s certain in all of my fights,” she said. “I don’t fight to score points, and I don’t lie in wait for a possible mistake my opponent is going to make; I go out and try to finish my fight as fast as possible.”