Shayna Baszler: Hail to the Queen 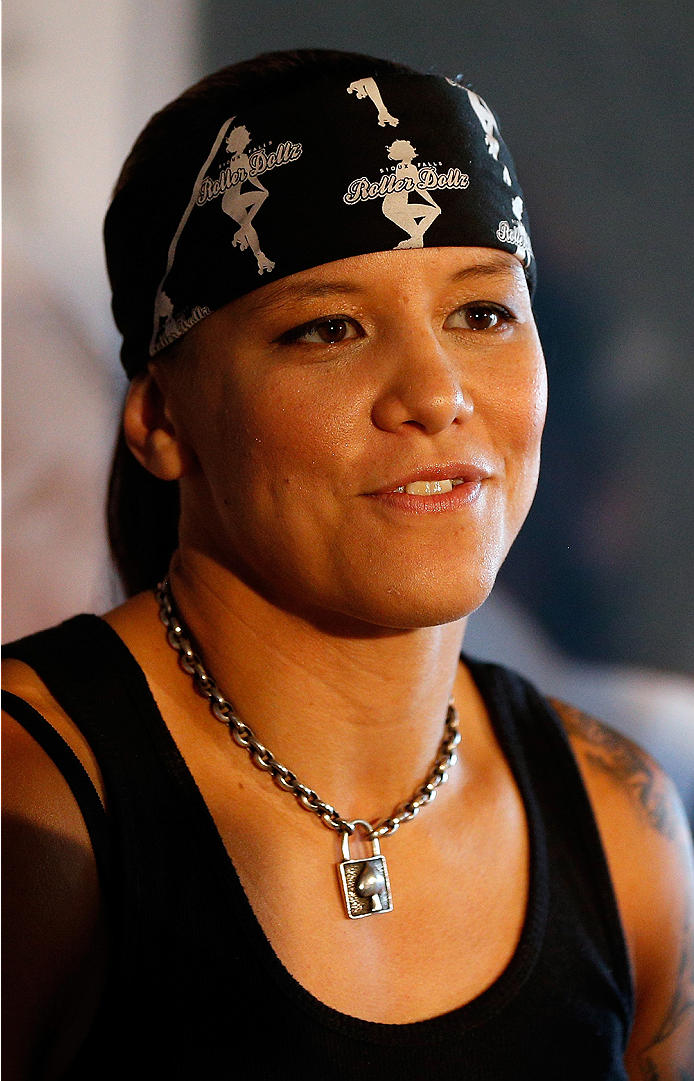 When Shayna Baszler first put on gloves and fought, there were no UFC fights for women, no appearances in video games or in national ad campaigns, and her fights certainly weren’t discussed on major television networks. None of that mattered though.

“We fought for different reasons, we had different dreams,” Baszler, who turned pro in 2003, said.

Sioux Falls, South Dakota’s Baszler did it because she just wanted to fight. There was no UFC Gym back where she was growing up, so the garage, a few friends, and a Ken Shamrock book with some techniques in the back had to do.

“We thought we were awesome because we said we’re the only ones who trained for real,” she laughs. “We were thinking we were hardcore and stuff, and that’s how we started.”

Baszler was hardcore. Her resume, one that includes fights with Julie Kedzie, Roxanne Modafferi, Tara LaRosa, Cristiane Cyborg, Sarah Kaufman, Megumi Yabushita, Alexis Davis, and Sara McMann, spells that out loud and clear. But it was in those early days that she earned a level of street cred that she’ll never lose.

“I’m signing up at these shows where people are still writing down ‘streetfighting’ as their art, and they think that’s awesome,” she said. “We laugh about that now, but that should tell you, man, that’s what it was like back when I started fighting. Let alone to be a girl. And back then, it was like ‘oh, they’re having this show and we can sign up at the door,’ and I’m just hoping another girl shows up. It didn’t even matter if she was my weight. If another girl signed up, that’s it, we’re putting the two girls together.”

She laughs, thinking about how people go to great lengths to differentiate between pro and amateur fights and how they’re listed online. It wasn’t like that back in her formative fighting years.

“If we’re lucky we’re getting a hundred bucks under the table or something,” Baszler said. “We didn’t have that – we’re just fighting. You’re lucky if you got paid and you could take your coaches or your training partners for dinner afterwards.

“It’s been a long, long road, and that’s how long I’ve been fighting.”

Yet the 34-year-old “Queen of Spades” isn’t speaking as a retired observer recalling past glories. On Saturday at the Sleep Train Arena in Sacramento, she will finally make her UFC debut against Brazil’s Bethe Correia, still competitive, still relevant, and still hungry to win. It’s the way she’s always been, but these days, after a loss on season 18 of The Ultimate Fighter booted her from the competition, her hunger doesn’t come just from the wins and losses, but from a desire to prove that she’s still got it.

“When I started fighting, it was about proving everyone wrong, like this is a sport, we train, and look at what a trained fighter can do,” she said. “We’re proving the masses wrong. And now, it’s at a point where it’s like everyone only knows me from my fight on the show, and my motivations are the same, but the reasons are different. Now I’m getting in there to prove everyone wrong again, and it’s almost reignited the hunger.”

15-8 as a pro, Baszler comes from an era where women weren’t fighting in the Octagon and the mere mention of it brought a quick no from UFC President Dana White. Then came Ronda Rousey and she quickly changed the dynamic of the sport to the extent that women were now fighting in the UFC. And Baszler, who never even considered the possibility of such a reality, had to make a quick goal readjustment.

“There was definitely a time when I was fighting and this wasn’t even an idea,” she said. “It wasn’t an idea to make this a career, let alone in the UFC. Previous to women being in the UFC, I had already done it all. I fought on TV, fought in big arenas, fought on Showtime, I fought all the best girls in the world – won some lost some – and I’ve experienced it all. So not being in the UFC, it just wasn’t an idea.”

Rousey changed all that, and when Baszler finished her run on The Ultimate Fighter 18, she joined forces with “Rowdy Ronda,” Jessamyn Duke, and Marina Shafir in California, and the quartet quickly adopted the moniker of “The Four Horsewomen,” after the legendary pro wrestling faction anchored by Ric Flair.

Unfortunately, her debut wasn’t as quick, as an injury forced her out of her UFC debut against Sarah Kaufman in April. A new bout against Correia was set up for August 2, but when that entire card was scrapped, she landed in Sacramento against the aggressive Brazilian this weekend.

“It’s a good fight for both of us,” Baszler said. “She (Correia) is undefeated, she’s pulled the upset on her last couple wins against Kedzie and Jess, and I think she’s coming in with some good momentum.”

She also ignited a pretty nice feud when she beat Baszler’s teammate Duke and raised four fingers before putting one down, representing Four Horsewomen to start, three left. Baszler doesn’t have a problem with any such antics though.

“I’ve always believed that people care much more about the story of the fight than the actual fight,” said Baszler, who always understood the game better than most. That’s what happens when you’ve seen it all, and that experience should serve her well on Saturday night.

“There’s a grittiness to us old vets,” she said. “We were fighting when the prize was gas money. I think in some ways, it’s a badge of honor. How many of these girls that were on the (TUF 18) show would be fighting if that’s what it was. And that was the top of what it was. We were the main event in a barn at the State Fairgrounds, and hopefully the police wouldn’t come in and shut the thing down because of this crazy underground fighting. That was the goal.

“Now, girls can grow up and sign up for jiu-jitsu class when they’re 10 years old and have dreams of being in the UFC,” Baszler said. “That’s crazy to me. I didn’t have that when I started fighting, so it’s come a long, long way. And not only can I say ‘well back in my day,’ (Laughs) but I’m still active and I think I’m really still competitive.”