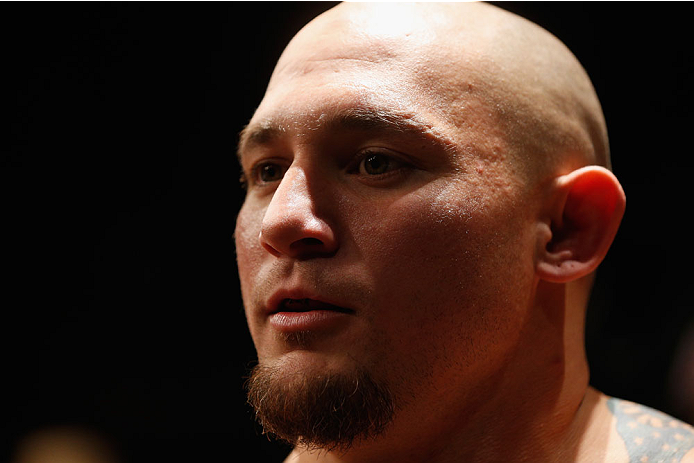 It’s the most addictive of feelings and no one knows it more than Shawn Jordan.

“I originally was a grappler, then I learned different stuff, got a knockout and was like ‘I’m a knockout guy now.’”

The affable heavyweight prospect laughs, clearly not denying the fact that once you finish a fight with your fists while standing, it’s hard to go back to the clinch game against the fence or a controlling ground attack.

That’s why in five UFC wins since 2012, each has come via knockout, and he will likely be looking for a sixth on Saturday when he faces Derrick Lewis in New Orleans. It’s a homecoming of sorts for Jordan who became an honorary citizen of Louisiana when he played football for the LSU Tigers.

Louisiana is also the place where Jordan – who now trains with American Top Team in Florida – made his bones as a fighter, competing in several amateur matches before turning pro in 2009 and going on to fight 10 of his first 13 bouts in the state.

“It was a little more developed and sanctioned there and there’s a lot of support,” Jordan said of his formative MMA years in Louisiana. “Our commission there is strong and it lets the amateur guys come up and actually fight.”

One of those early pro fights took place in Lafayette in 2010 against the same Derrick Lewis he will meet up with again this weekend. Jordan won their first meeting via decision, and even though the bout was five years ago, is there still that feeling of this being a Louisiana turf war?

“We fought already, so it’s not really a turf war anymore, but we’ll see how it goes,” Jordan laughs, making it clear in a humorous way that he feels this was a score already settled. But now with both fighters making moves in a wide open heavyweight division, the matchup does make sense.

“I never thought about it,” Jordan admits. “I always figured if I had to fight guys over again, it would be top ten kind of guys, but if that’s what the UFC wants me to do, I’ll do it.”

And when you consider that the first fight happened so long ago, it’s almost like a new matchup, even though Jordan sees Lewis’ strengths the same as they were back then.

“I still think Derrick has some of the same attributes,” he said. “He’s a big, strong guy who hits hard and that’s what he makes his living off of. It’s going to be a good fight. He’s tough, he’s big, but I’m faster and a little smaller, and I hit just as hard, so we’ll see.”

Jordan does hit hard, as proven by his aforementioned performances in the Octagon. Yet while before he could be seen as a feast or famine slugger, in his last two finishes of Jack May and Jared Cannonier, the 30-year-old has been showing that rarest of attributes among the big men of the sport - patience.

“I have a lot of fights, a lot of cage time, and more time in the UFC in itself, so I think poised and more controlled is a pretty accurate description of the last two fights,” he said. “It takes a little bit of time to understand and handle the skills you’re developing as you’re continuing to grow as a fighter and it kind of helps you gain that poise. When you first come out, you’re just swinging and trying to throw as hard as you can. As more time goes by, you gain more poise and an understanding of the possibilities of how a fight may come out.”

A firefight is still a firefight though, and Jordan knows that at some point, he may get tagged and forced to start throwing back with a little less patience than he would like to display. And that’s just fine with him.

“Heavyweights all hit hard, there’s no secret about that,” he said. “And regardless of how much experience you have, if you get your bell rung, you’re just going to react and start swinging too.”

When that happens, the trick is to get them before they get you, and with wins in four of his last six, odds are that Shawn Jordan is going to get there first.