Sharper than Ever, Neer Shoots For Seven Straight

"Lately I feel like I came into my own and I’m seeing things that I didn’t see before. It seems like I kinda figured out what I need to win." - Josh Neer 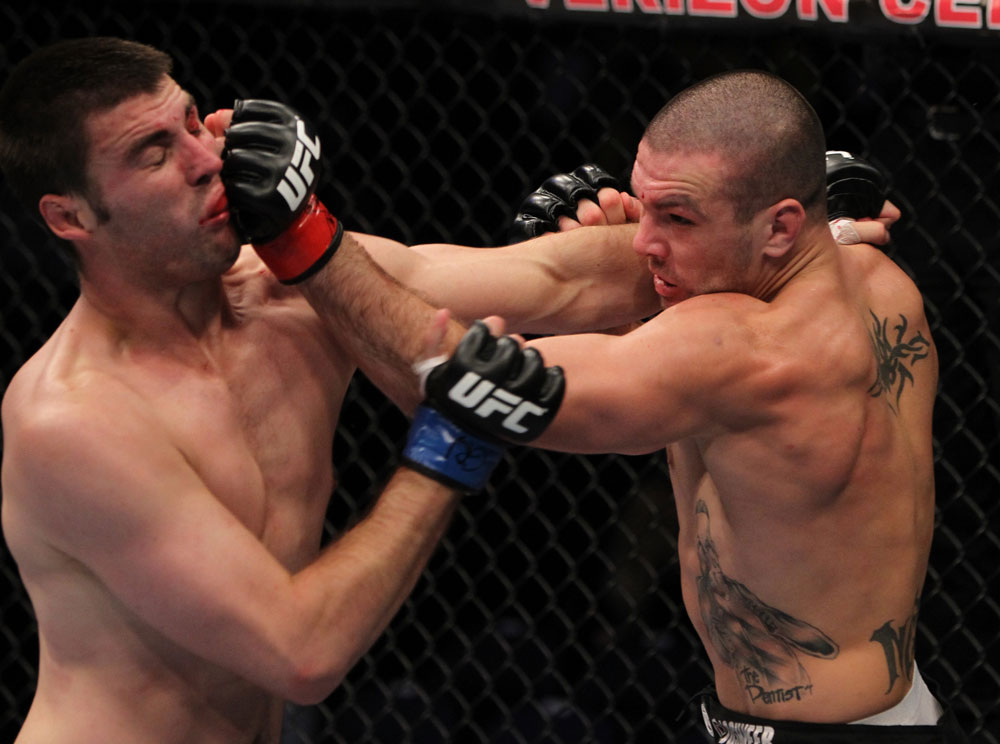 “I’m a fighter.  I think a lot of guys like the attention and they almost like weighing in or signing autographs more than they like fighting.” – Josh Neer

The above quote is one I’ve used consistently (some would say excessively) ever since it was given to me back in 2006, and it’s the perfect line to capture who UFC welterweight Josh Neer is in the world of mixed martial arts.

He’s as pure a fighter as you will find, not one to be chasing down interviews or looking for the next photo op; in fact, he would probably avoid both if possible. So when you point out to him that his current six fight winning streak is his longest since he won 10 in a row in 2004-05, it’s not surprising that the response is, “I don’t really pay attention to stuff like that, but I definitely haven’t lost in a long time.”

That’s Josh Neer, and hopefully, he’ll never change. Like the Diaz brothers, his sometime training partners out in California, the Iowan is content to get a fight, show up when he’s supposed to, throw down for three rounds or less, pick up his check and go home. It’s a life that he’s known for over a decade, through 44 documented pro fights and countless others (some say into the hundreds). And when you were scrapping every weekend on the Midwest circuit for little or no money, you had to love the art of the fight, and not the idea that one day you could be on television.

“My amateur fights, I just had a good time,” said Neer. “It wasn’t really a job, it was fun. Every week you would meet new people and all your buddies fight with you. That’s one thing that I really miss – all my friends and my teammates fighting on the same card as me, as opposed to me just fighting on the card without any of them. That’s the biggest part that I miss.”

Neer has kept plugging along though, through the ups and downs, and after a 2010 loss to Eddie Alvarez, he hasn’t lost, with the first four wins of the current streak leading him back to the UFC, where he has won two more bouts, stopping Keith Wisniewski and submitting Duane Ludwig.

“I think the biggest thing is my personal life,” said Neer when asked the secret of his recent success. “Everything’s good in my life right now and my training is going good as well. Lately I feel like I came into my own and I’m seeing things that I didn’t see before. It seems like I kinda figured out what I need to win.”

That means switching things up when necessary and using his entire tool box to secure a victory. The perfect example was the Ludwig bout in January, when he took what was expected to be a striking battle to the mat, where he finished his opponent off at 3:04 of the opening round.

“I read his (Ludwig’s) interview and he was saying we’re even on the ground and he’s a better wrestler, and I was confused,” said Neer. “I didn’t really understand that. I felt like my ground game was way better than his and my wrestling was better than his too. It kinda irritated me a little bit that he would even say that. I think most people know that my ground game is good, but I guess sometimes people underestimate it and sometimes people underestimate my wrestling. I wrestled since I was six years old and I think people don’t realize that because in some of my fights my wrestling hasn’t looked that good because I didn’t really defend the takedown.”

And when your nickname is “The Dentist” because of your propensity to rearrange opponents’ dental work, there is an expectation that all you can do is brawl. But Neer is an old-school mixed martial arts who has worked with some of the game’s best over the years. It’s almost like calling Hall of Famer Matt Hughes “just” a wrestler despite a submission game that has finished off plenty of world-class foes. So if you look past the rest of Neer’s game, it’s at your own peril.

“You don’t necessarily have to be a black belt in jiu-jitsu to be good on the ground,” said Neer, who has seven official wins by submission. “I’ve just had good trainers around me, and I’ve been in the game for so long that I’ve picked up different tricks and been able to submit people when I’ve needed to.”

He may need to dig into that bag of tricks on Friday when he meets up with submission specialist Mike Pyle. It’s Neer’s third consecutive fight since coming back to the Octagon that you could define as a veteran vs. veteran bout. And those are exactly the matchups he wants.

“That’s definitely what I’ve wanted to get, and I’ve relayed that to my manager and he must have relayed it to (UFC matchmaker) Joe Silva,” said Neer. “They’ve been pairing me up with veterans, guys that are gonna try to finish me, guys that are gonna go in there and try to fight. I don’t want to fight a guy that’s gonna try to win a decision. I’m happy with how they’ve paired me up since I came back.”

And while it’s too early to be talking a welterweight title shot for Josh Neer, a few more wins like he’s put together in the last two years will get that chatter started. Not that he’s going to be the one calling for it. That’s just not his style. And that’s a good thing.