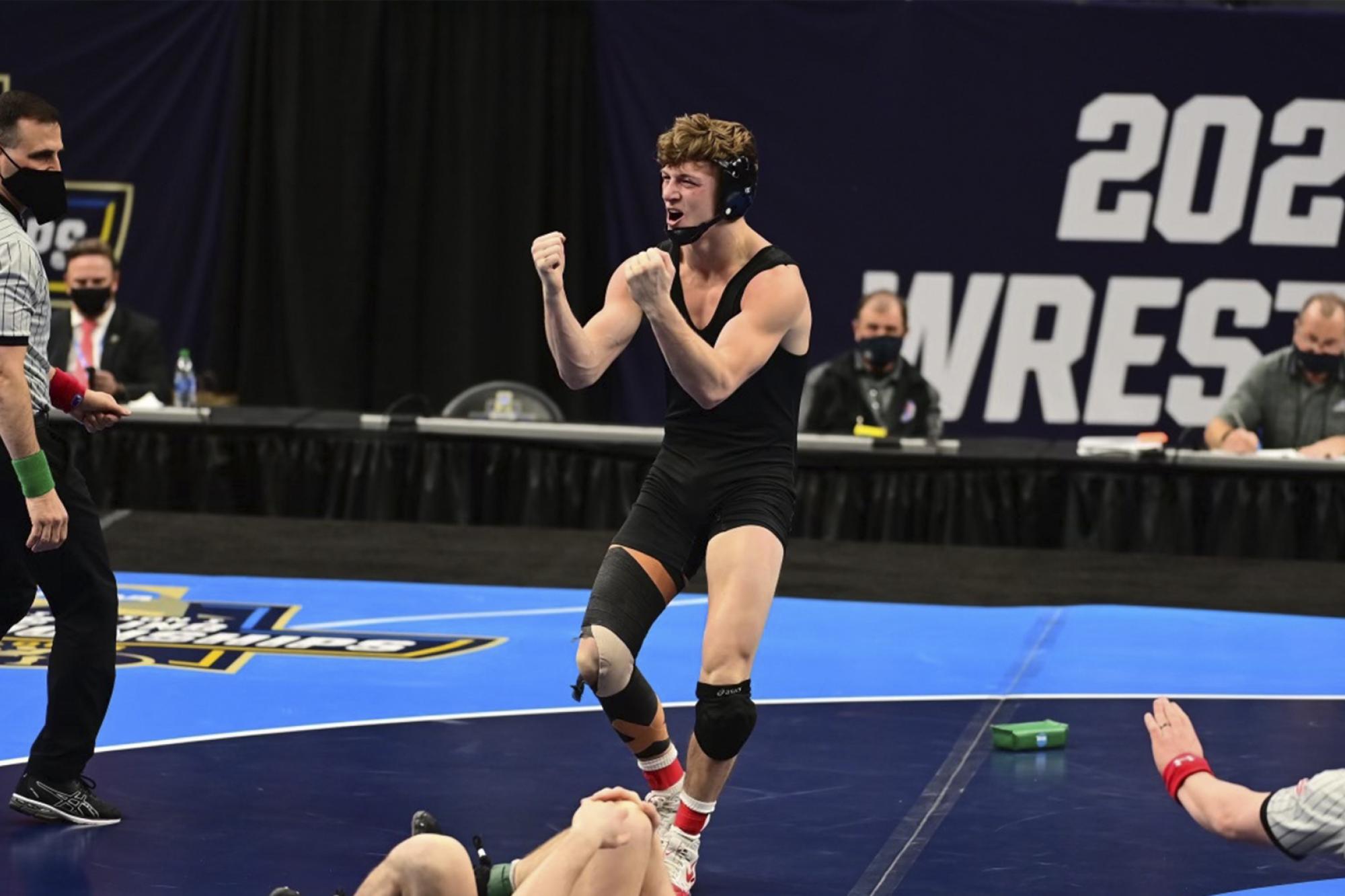 When Shane Griffith Found Out That The Stanford Wrestling Program Was Getting Cut He Decided To Make A Statement By Doing What He Does Best - Winning.
By Walker Van Wey • Jul. 22, 2021

Take away the lights, cameras, graphics and cinematography and what would the 165-pound National Championship be left with?

One of the greatest endings of all-time.

In July 2020, Stanford University announced a slew of programs to be cut, with the Cardinal wrestling team being one of nearly a dozen programs to get the axe. With little time to prep themselves before the public received the news, Shane Griffith and the rest of the team had no other option but to absorb the news and wrestle like there was no tomorrow.

In a matter of months there wouldn’t be.

Today is the day of the decision for @Stanford to decide on all the cut sports. Let’s let em know we’re all watching. Come on guys do the right thing. @KeepStanfordWRE

“It was very difficult, and to keep it short, it was pretty heartbreaking,” Griffith said. “It was something you look forward to as a kid, getting to attend a prestigious university and kind of hoping the university has your back. Obviously that kind of went the other way. It was hard to keep competing but, at the same time, we were still there for each other, trying to do what was best for each other individually and as a whole.”

While the University of Iowa had another mind-blowing year and Oklahoma State’s AJ Ferrari gave everybody something to talk about, it was unranked Stanford wrestling that seemed to have the attention of everybody.

Chael Sonnen, Daniel Cormier, Henry Cejudo and many more could be found regularly supporting the movement. Without ever having met Griffith or any other member of the team or having gone to the school, some of the biggest names in the history of wrestling and MMA took the program closing personally.

Why are you tweeting about him despite cutting the program when they raised 12 million dollars? https://t.co/tz9t20OQIN

“I think it shows how much combat sports are there for each other,” Griffith said. “Wrestling’s not the biggest sport in the world and the UFC at one point wasn’t the biggest sport in the world either, but everyone knows how hard each individual works at their respective sport. Just bringing attention to the situation with the big stage and platform and fan base, it definitely meant a lot and it was something I’ll never forget.”

The louder the voices began to crescendo, the movement spread further and further into the mainstream’s vision. If the school was going to close the program down, it was going to be noticed by far more eyes than ever expected.

Months before the NCAA title, the Keep Stanford Wrestling movement raised $10 million to continue the program. Despite the excess of funds in a sport independent of excess equipment and arena/stadium fees, the university stood firm. Stanford wrestling was in its final days.

Throughout the entirety of his sophomore season, Griffith’s undivided attention was on wrestling. Potential landing spots, the journey he spent his whole life on being pulled out from under him and equally hungry opponents all shared spots in Griffith’s brain anytime the sport of wrestling was discussed.

Griffith narrowed future landing spots down to Michigan and UNC. The Technology and Science major, who was coming off a 28-0 season, wouldn’t likely have to scavenge to find a home.

Stoic, driven and professional, Griffith didn’t get caught up in the adversity and distractions, as he took them with him to the National Championship. The most casual of college athletics fans were all behind most likely the last wrestler the school would ever see.

All sympathy goes to the rest of the 165-pound wrestlers in the tournament. They were one win away from being vilified by the entire country.

As if it were scripted, Griffith would advance to the National Championship match. Now there was even more on Griffith’s plate. More pressure than any wrestler in recent memory. The newfound attention may have broken some people, but Griffith used the platform as the chance to silently stick it to Stanford University for the final time. He turned the singlet inside out, and won the National championship for his team, not his school.

NCAA champion from Stanford and their cutting the program. #SaveStanfordWrestling !!

“It was bigger than the university,” Griffith explained. “It was about competing for each other and standing next to one another. Having the opportunity to send a message to the world on a bigger stage was awesome.”

Where most athletes would take the opportunity he was granted to let their ego overtake them. Griffith had the platform and the encouragement from almost everybody in the country to give Stanford a message far louder than an inside out singlet, but Griffith had no interest in letting anything take him off cloud nine.

Get Ready For Upcoming UFC Events

There’s no use in winning if you’re going to tarnish your legacy with raw emotion. Griffith may have a national title to his name but rubbing the Cardinal nose in it isn’t top of the mountain. There’s still plenty of boxes to check before he’ll feel he’s “made it.”

“As much as it was an awesome opportunity, there’s bigger things that lie ahead for me, like trying to win another one next year,” Griffith said. “It was awesome and almost like a Cinderella story, but I always want to be known as just Shane, not the wrestler or the wrestler from Stanford. Not the individual, but the character and the kind of person I became.”

So happy for this! Wrestling is alive more than ever! https://t.co/nq8lBgL525

Stanford University announced in May that the wrestling program would return for the foreseeable future. Bygones were bygones and Griffith will spend the rest of his college career representing Stanford University. The singlet will be right side out this season, but it’s hard to imagine Griffith has any regrets about his historic run.