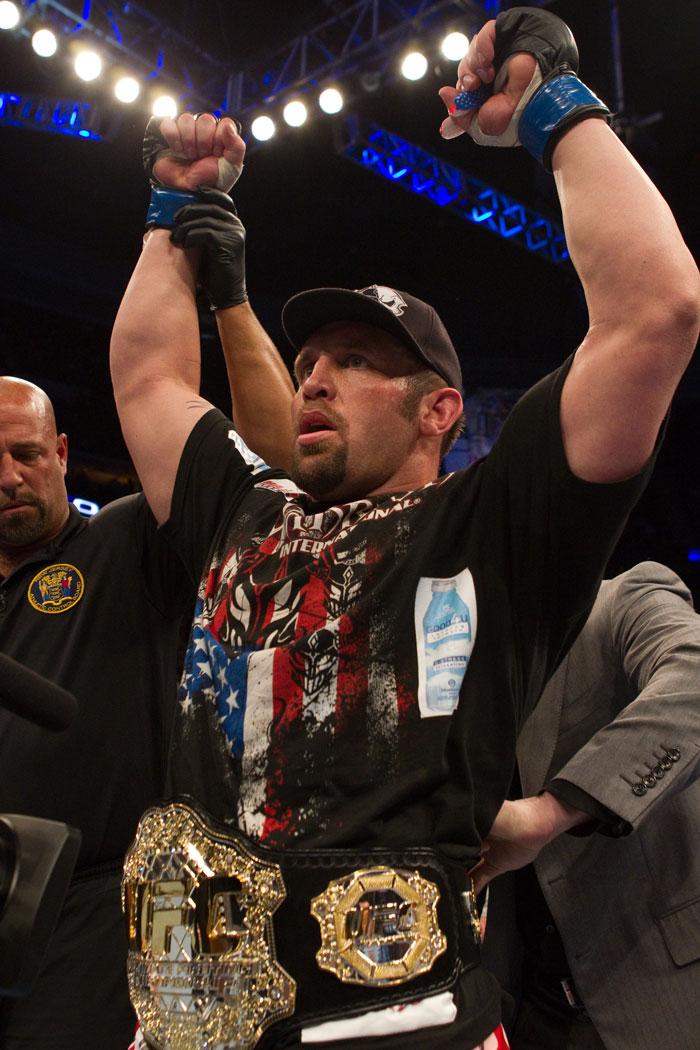 If you want to talk about the legacy of Shane Carwin, the former interim UFC heavyweight champion who retired Tuesday at the age of 38, the most telling aspect of his relatively short, yet explosive, UFC career was that you can never say he was in a boring fight.

A lot of that had to do with the fact that with one swing of his fists, a fight could end suddenly, but it’s also a testament to the fact that for someone with such obvious physical gifts when it came to size, power, and athleticism, he was still just a fighter at heart. Carwin was a fierce competitor who would take one to give one, and sometimes – as in his 2009 fight with Gabriel Gonzaga – it worked, as he rebounded from a broken nose to knock his opponent out seconds later. Other times, as in what would end up to be his final bout against Junior dos Santos in 2011, it didn’t, but even after taking a steady thrashing from the future heavyweight champion, the idea of quitting never entered his mind.

So when Carwin tweeted “Officially retired 2day:-) thank you to my family, friends and fans! #dreambig GOD BLESS!!!” Tuesday evening, you had to assume that it wasn’t from a series of losses or a realization that he couldn’t compete with the best in the world anymore, but that his body finally overruled his heart and mind and made the decision that it was time for him to walk away.

That would come as little surprise to fight game insiders, who saw Carwin battle with serious back and neck injuries for years, some dating back to his college football days, when the two-time Division II All-American linebacker for Western State College saw his back ailments keep him from pursuing a career in the NFL. Of course, the gridiron’s loss was mixed martial arts’ gain, as Carwin – who was also a Division II National wrestling champion – soon turned to fighting, making his debut in October of 2005 with a first round win over Carlton Jones.

Going home early became a habit for Carwin, who didn’t see the second round until his 2010 title fight with Brock Lesnar. That was his 13th pro bout. In the previous 12, Carwin was a force of destruction, tearing through all opposition, and ending five of those bouts in less than a minute.

In 2008, he made his UFC debut with a 44 second knockout of Christian Wellisch, and after similarly impressive finishes of Neil Wain and Gonzaga, he was matched up with Frank Mir on March 27, 2010 for the interim UFC heavyweight title. Three minutes and 48 seconds after the opening bell, Carwin had his 12th victory and a championship belt.

Four months later, it was a clash of the titans between Carwin and Lesnar for the unified title, and after rocking Lesnar early, Carwin was on the verge of a stoppage win as he pounded his foe across the Octagon and back. As he told me after the fight, “The type of fighter that I am, I’m not going out there to score points, I’m going out there to try to wreck that guy.”

And maybe with a referee with a quicker hook in there, Carwin might have walked away with the title. But Josh Rosenthal gave Lesnar every opportunity to defend himself and get back in the fight, and that’s just what the champion did.

“The thing is that I had been there previously in all my fights, and I just go for the kill,” said Carwin. “And that’s what I did. Rosenthal said on multiple times, ‘Brock, you’ve got to show me something or I’m gonna stop the fight.’ When you hear that as the top guy, you try to pick up the pace to make the ref jump in and stop it, and it was a relentless pace there for a while. I just didn’t get the stoppage.”

Then the bell intervened, and when the second round began, Carwin said “there was nothing there.” 2:19 into round two, Lesnar submitted Carwin with an arm triangle choke.

It was one of the most epic heavyweight fights ever, but Carwin was unable to jump right back into the mix and fight for a rematch, as his next bout would be with a surgeon’s knife. When he did return, he lost the three rounder to dos Santos, and then it was back into surgery. It would be his last fight.

Yet unlike some fighters in the combat sports world, who find themselves unable to cope with life beyond the final bell, Carwin is a pretty safe bet to break that mold. A family man with two degrees and a full-time gig as an engineer in his native Colorado, the 38-year-old prepared for life after fighting before it became a reality. And now that he is walking off into the sunset with a final record of 12-2, he can not only be secure that his family is taken care of, but that he put together a fighting career that he can be proud of.

But oh, how we’ll miss those knockouts.