Shane Carwin - If It Ain't Broke, Break It

“I think dos Santos has got that attitude. He’s full of
confidence right now and he’s been destroying people. When I see dos
Santos and his attitude, I think he would stand and bang with anybody.” - Shane Carwin 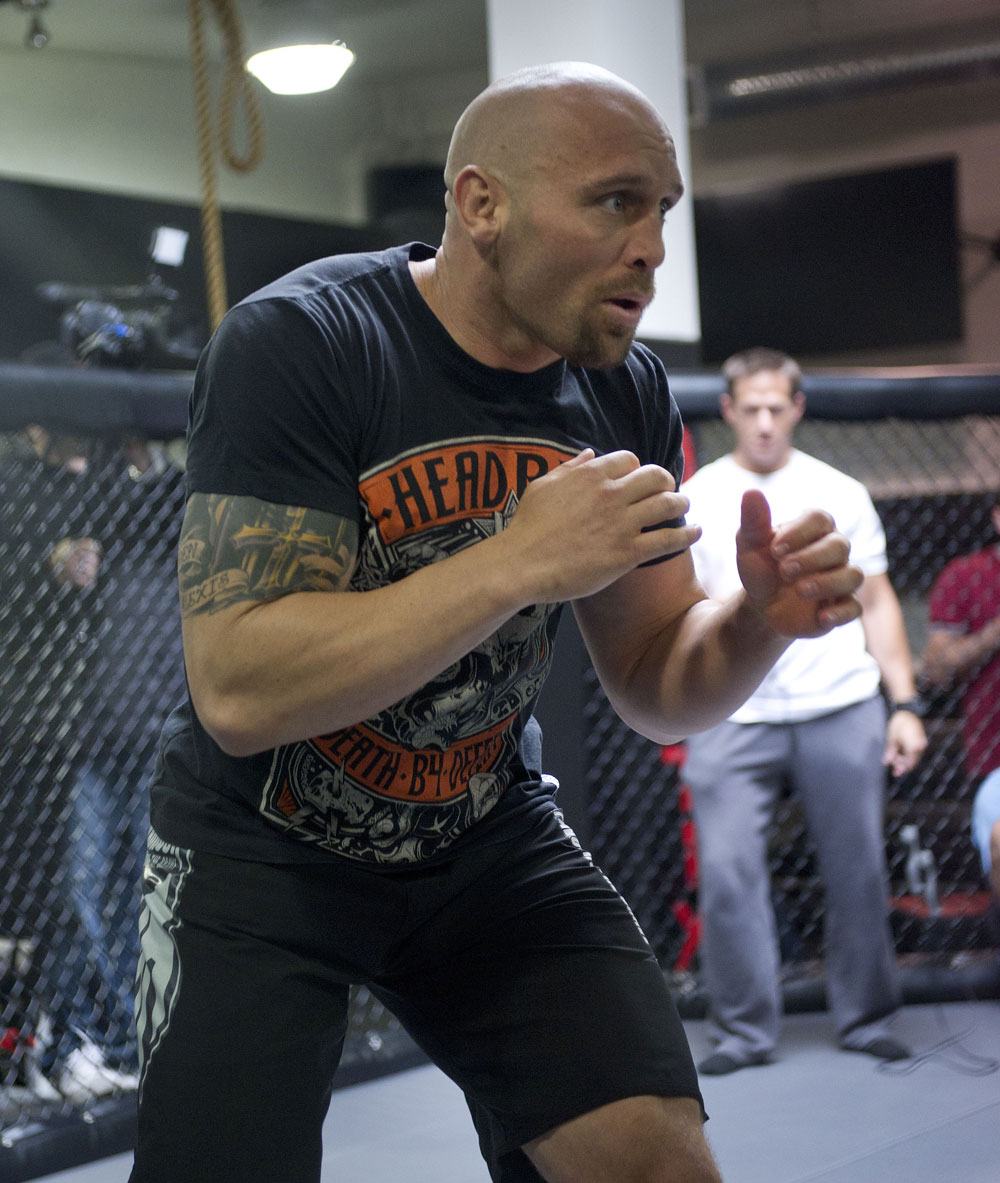 There is no mistaking who Shane Carwin is when he steps into the Octagon. There are no flying armbars, no laying and praying, no squeaking out a win on the judges’ scorecards. In honor of middleweight boxing great Marvin Hagler, let’s just say that Carwin’s only motive is to destruct and destroy.

And through 12 professional mixed martial arts fights, no one did it better than the native of Greeley, Colorado, a veritable force of nature with mallets for fists. So when he rocked Brock Lesnar in the first round of their UFC heavyweight championship bout last July, there were no thoughts of restraint, patience, or moderation.

“The type of fighter that I am, I’m not going out there to score points, I’m going out there to try to wreck that guy,” said Carwin, who saw the undisputed heavyweight championship belt flashing before his eyes as Lesnar staggered and tried to shake loose the cobwebs.

What followed was the usual Carwin assault, one that had already finished off Frank Mir, Gabriel Gonzaga, Neil Wain, and Christian Wellisch in UFC fights alone. Punch after punch rained down on Lesnar, and just when you thought it was over, the champion would do just enough to keep referee Josh Rosenthal from stepping in.

“The thing is that I had been there previously in all my fights, and I just go for the kill,” said Carwin. “And that’s what I did. Rosenthal said on multiple times, ‘Brock, you’ve got to show me something or I’m gonna stop the fight.’ When you hear that as the top guy, you try to pick up the pace to make the ref jump in and stop it, and it was a relentless pace there for a while. I just didn’t get the stoppage.”

It’s what Carwin was built for and what brought him to the top of the heavyweight division. He didn’t make it there by taking a wait and see approach when he hurt an opponent. But Lesnar weathered the furious storm and did this enough between barrages to hear the bell to end the first round. He didn’t know that the fight was already over.

“When I came out for that second round, there was nothing there,” said Carwin, and 2:19 into round two, Lesnar submitted him with an arm triangle choke and retained his title. In Lesnar’s next fight, he was stopped in the first round by Cain Velasquez.

Carwin’s next bouts would be with a surgeon’s knife and a segment of the fanbase that turned on him because of his cardio. First came the post-fight attacks, which strangely weren’t as widespread when Gray Maynard admittedly gassed out after an equally furious first round attack on Frankie Edgar in their UFC 125 main event. But to the critics, Carwin’s track record in fights going past the first round – 0-1 – was grounds enough to question everything about his training regimen.

“It’s to be expected,” said Carwin. “I think Cain (Velasquez) took a carbon copy of that fight, and he picked his shots better to finish the fight. That’s probably what I need to learn and take away from it. But we redid some things and you always want to make yourself a better fighter moving forward. Otherwise the rest of the field is gonna catch you.”

But was Carwin in need of fixing? Anyone in the heavyweight division who gets an opponent hurt and then empties his clip in search of a knockout should have been praised, not ridiculed, and which of Carwin’s peers, with the exception of maybe Velasquez, would have come out fresher than he did for round two?

That’s a question that can only be answered in the Octagon, but for now, Carwin is leaner, more streamlined, and healthier for his return this Saturday against Junior dos Santos, and healthier is the key element he has in his back pocket in Vancouver thanks to a Foraminotomy procedure to relieve pressure on his C5, C6 and C7 vertebrae. It was a surgery that was a long time coming.

“Functionality-wise on the right side of my body, I kept getting treated and we were trying to work through some muscle issues on the right side, but they were in fact nerve problems in the muscles,” he explains. “There’s a lot less pain on that side, I have full grip strength in my right arm, and that knot that was always in the middle of my back is gone as well, which is nice. I wouldn’t say that I was super limited, but when you have numbness, and you can feel the pins and needles in your fingers all the time, you know something’s not right.”

So finally, in November of last year, he went under the knife wielded by Dr. Chad Prusmack, and everything went smoothly, though with any surgery, there are risks and concerns.

“I saw one of the best doctors around, he’s the surgeon for the Denver Broncos, Dr. Prusmack, and he’s a very competent man, which made me feel confident,” said Carwin. “When I went into the surgery, I didn’t know a lot of the details, which was probably good, but they bolted a cage on to my head to make sure I wasn’t moving or anything. Of course after I was out, those were some of the worst parts. When I got done, I think you could see my skull where those bolts were put into my head. But once I was out of surgery, I could tell right away that the numbness was out of my arm.”

Now if you thought Carwin was scary before, just think of him now, firing on all cylinders with no medical issues. He must feel like a 25 year old now, right?

This 36 year old will be back in the Octagon this weekend, but dos Santos wasn’t his original dance partner and he wasn’t supposed to be fighting for a shot at Velasquez’ crown. Initially, newcomer John-Olav Einemo was scheduled to trade hands with him until Lesnar was forced to pull out of his bout with dos Santos due to another attack of diverticulitis.

“We had to look him up, but of course coach (Amal) Easton knew who he was right away,” said Carwin of Einemo, who will now face fellow UFC debutant Dave Herman. “He’s an Abu Dhabi champ and he’s world class. He was on top of the heap for a while, and I think he had some injuries that set him back, so I think he was a very formidable opponent, and I’m excited to see what he can do in the UFC.”

Not as excited as Carwin was when he got the call offering him the dos Santos fight. Not only does he get a title shot with a win, but given his previous back problems, do you want to worry about someone just trying to punch you in the face all night (dos Santos), or do you want to face a submission specialist intending to twist every limb in the opposite direction. Yeah, dos Santos it is.

“I feel like you don’t get a lot of these opportunities in life, and this is a great opportunity,” said Carwin, who cites not being there for his teammates and their training camps as the thing he missed the most while on the sidelines. “It gives me a chance to go out there and perform and do something that I love. Dos Santos is a top ten guy in the world, and I think this is the fourth top ten guy I’ve fought in a row.”

It is, and after showing that he could beat (Mir, Gonzaga) and hang with (Lesnar) the previous three, he has to be feeling confident in his chances against “Cigano.” Throw in the fact that dos Santos’ bombs couldn’t dent the chin of Roy Nelson last August, and that’s another point in Carwin’s favor, right? Well, he’s not about to dismiss his opponent’s punching power and the rest of his game just yet.

“Nelson has an iron chin, and dos Santos is the real deal,” said Carwin. “I think he’s real well-rounded, very difficult to take down, and nobody’s ever really got to see his jiu-jitsu on the ground. He’s worked with (Antonio Rodrigo) Nogueira so you know he’s gonna be well-versed and his striking and his speed is the top of the heap in the heavyweight division.”

Will he give Carwin his wish and stand with him though?

“I think dos Santos has got that attitude,” he said. “He’s full of confidence right now and he’s been destroying people. When I see dos Santos and his attitude, I think he would stand and bang with anybody.”

That’s the kind of math this Colorado engineer enjoys best.