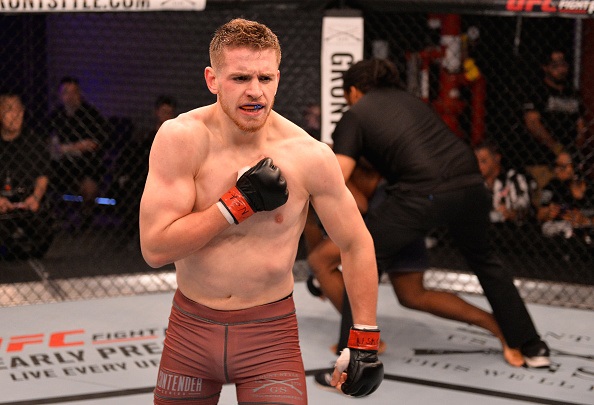 As Edmen Shahbazyan made his name in the amateur boxing world, winning at the PAL Tournament and the Desert Showdown and getting close to a berth in the 2016 Olympic trials, his coach, Edmond Tarverdyan, watched closely.

Sure, Tarverdyan was the coach of UFC Hall of Famer Ronda Rousey and several other MMA notables, but he had also worked with former world boxing champion Vic Darchinyan and a host of hopefuls in the sweet science. So he saw the fast hands, the power, and the unlimited potential of Shahbazyan as a boxer, and he knew a path had to be chosen.

“This” is the UFC contract the 20-year-old Shahbazyan earned after a 40-second knockout of Antonio Jones on the July 17 edition of Dana White’s Tuesday Night Contender Series in Las Vegas. Now the middleweight, who upped his pro record to 7-0 with seven first-round knockouts, will be throwing hands with the best of the best in the Octagon.

“This was the goal, to be in the UFC, and we knew we would get there,” said Shahbazyan. “Based on how I won, and my record, I was confident that they were gonna give me the contract.”

That was confidence well placed, especially considering that of Shahbazyan’s seven knockout wins, four have ended in under a minute. Has he been beating UFC-level competition on the way to the big show? No. But he can fight and he’s done what hot prospects are supposed to do with foes on the regional level. And to think, he also wrestled in high school and has a black belt in Shotokan Karate, making the Glendale product’s decision to stay with MMA a no brainer.

Needless to say, it’s not surprising why Tarverdyan was so intrigued by his latest charge. And in the coach’s mind, we ain’t seen nothing yet.

“He finishes his fights in the first round, and people think he’s just a quick starter, but he’s never lost a match in the third round in the amateur game in his whole career,” Tarverdyan said. “He’s a slow starter, and still he finishes fights like that. So as a pro, the best thing he has is his durability. And when he’s in sparring sessions with the best in the world at Wild Card or anywhere he spars, he looks better in the later rounds.”

Shahbazyan will need all that talent, athleticism, power, durability and grit to succeed in the UFC, but he appears to have everything under control, refusing to let the hype of being the next big phenom get to him.

“Even if there is pressure, I like it,” Shahbazyan said. “I don’t mind it and I’m comfortable with it. As long as I go in there and do my job, and keep moving up the rankings, that’s what matters for me.”

And if he ever does get overwhelmed, the Armenian community in Glendale will be right behind him to give him the push he needs.

“They’re big supporters of MMA, and having that support is amazing,” he said. “I’m glad to represent the Armenians and I thrive off that support. I want to keep Armenian culture always high and keep us at the highest when I’m performing. I always want to represent my culture. We’re known for being tough and durable and I’m going to keep it that way. There is a responsibility, but I’m ready to do it.”

That’s music to the ears of Tarverdyan, who may have initially wanted Shahbazyan to turn pro in boxing, but who now embraces the idea of his fighter becoming a UFC champion. So does the kid have that potential?

“A hundred percent,” said Tarverdyan. “I have no doubt that Edmen Shahbazyan is gonna shock the world and surprise everybody. He’s sparred with the best in the world and nobody’s ever gotten the best of him in the gym and I know that during competition he performs above his skills. Mark my words, he’s a future star.”