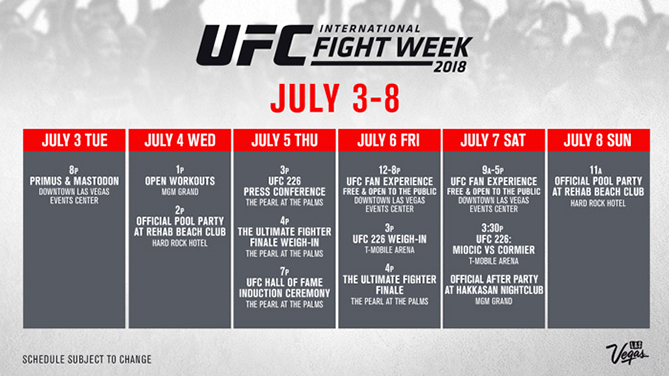 UFC International Fight Week is highlighted by the prestigious 2018 UFC Hall of Fame Induction Ceremony, an easily-accessible and fully interactive two-day UFC Fan Experience® and THE ULTIMATE FIGHTER&reg; FINALE: TAVARES vs. ADESANYA. The week-long festivities are anchored by the highly anticipated Superfight between UFC heavyweight champion Stipe Miocic and UFC light heavyweight champion Daniel Cormier in the main event of UFC® 226: MIOCIC vs. CORMIER, presented by Modelo, which takes place on Saturday, July 7 at T-Mobile Arena. Tickets for UFC 226 are available via AXS.

On Thursday, July 5, UFC will host the 2018 UFC Hall of Fame Induction Ceremony at 7 p.m. at The Pearl at Palms Casino Resort.  The annual ceremony honors contributors and athletes that helped shape UFC and left an indelible mark on the sport of mixed martial arts. Tickets to the induction ceremony are priced at $20.00 (does not include fees), with all proceeds benefitting Three Square Foodbank, southern Nevada’s largest hunger-relief organization. Tickets are available via Ticketmaster. The ceremony will also be streamed live and exclusively on UFC FIGHT PASS®.

Fans will be able to purchase exclusive UFC merchandise at the UFC store dome and at other UFC store locations, while also having the chance to participate in numerous activities with brand partners such as: BODYARMOR, Modelo, Toyo Tires®, Monster Energy, MetroPCS® and Motel 6.

The 27th season of UFC’s landmark reality series, The Ultimate Fighter®, will conclude on Friday, July 6, with THE ULTIMATE FIGHTER® FINALE: TAVARES vs. ADESANYA at The Palms. Tickets are available via Ticketmaster.

The UFC International Fight Week app will be the official destination for the most updated schedule of events, as well as the only place to secure your spot for autograph sessions. The app is scheduled to launch on Monday, June 25. All of these exciting events are in addition to the regularly scheduled fight week activities. For additional information, please visit UFC.com/fightweek.