A Settled Josh Burkman Preps for a Big Run 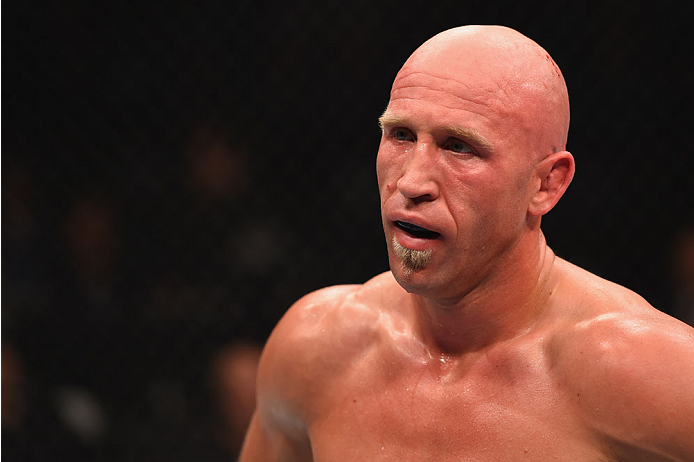 If you want an honest assessment of Josh Burkman’s second run in the Octagon thus far, look no further than the man himself.

“It’s been terrible,” he laughs, and it’s the laugh of a man who can look back at a rough year with good humor, knowing that the troubles of those past few months are just that – in the past. “It’s been a rough couple years careerwise, and not even just in my career, but life has not been settled, and I think that reflects on my performances in the cage.”

Those performances have seen Burkman drop a decision to Hector Lombard in January, a result later overturned to a no contest when Lombard failed a post-fight drug test, and then get submitted by Dong Hyun Kim in May. On Sunday, he gets a chance to return to the win column against fellow veteran Patrick Cote, and this time, he’s ready to show the form that brought him back to the UFC for the first time since 2008.

“My life feels like it’s all in order,” he said. “Now my goal is to win some fights. Because if we don’t, we’re gonna be gone.”

Burkman, 35, has never been one to mince words, especially when it comes to himself. And though he’s been through his ups and downs since appearing on the second season of The Ultimate Fighter in 2005, he was on a clear upswing when he re-signed with the UFC after a 6-1 run put him back on the promotion’s radar.

Back in the fold, Burkman was matched up with Cuban welterweight contender Lombard at UFC 182. His family was between houses and living out of boxes, and his wife Brandy was pregnant with their second child, but this was the kind of fight you don’t refuse. So Burkman got down to the business of preparation for one of the biggest bouts of his life.

Six weeks out from the fight, the first of a few disasters struck when Burkman tore two tendons in his ankle. “The People’s Warrior” did what most athletes do – when it hurts, tape it up.

“I was trying to do what I could do,” he said. “Then I got to spar three weeks out from the fight, and I popped a rib. I ended up with cartilage damage, ligament damage and a popped rib.”

Burkman estimates that he sparred twice in preparation for Lombard, but there was no question that he was going to fight. The adversity wasn’t done yet though, as he caught a case of bronchitis ten days out from the bout.

Brandy was also due to give birth the day after the fight, adding to Burkman’s stress level, and even his brother worried about him. The Utah native was undeterred.

“Listen, I’m fighting. I don’t know how I’m gonna do, but I’m gonna show up. I just figured I’m gonna get in the cage and I’m gonna fight. And part of that is that this is my first one back and I still thought I was gonna go in there and fight better than I did.”

He didn’t fight poorly in losing the three-round decision, but he was clearly not the real Josh Burkman. It didn’t help that Lombard’s leg kicks aided in Burkman tearing his meniscus and getting a Grade 3 quad tear, along with a tear of the tendon that attaches to his knee. Simply put, he was a mess by the time the final horn sounded.

Welcome back to the UFC.

“All of those things were my introduction back into the UFC, and I still went in and fought my ass off,” he said.

But what makes someone do that, to make that walk when everything is going against him?

“It’s called overconfidence,” Burkman said. “The truth is, I know I can knock out anybody with one punch. I know that there might be a chance that they slip up, I pick them up and slam them and I win the fight. Even if I go into a fight like I did against Hector Lombard, I’ve got a chance to win.”

Plenty of athletes play in pain. Not many of them have to worry about having someone trying to punch them in the face or twisting their limbs. Professional prizefighting ups the ante considerably, and if you can imagine what Burkman carried into the Octagon against Lombard, it baffles the mind.

“I really love to fight, and I know that when I get into the cage I’m gonna be ready to fight, and any injuries that I do have are not gonna hurt me for that 15 minutes of that fight,” he said. “They might hurt after and they might hurt before, but they’re not gonna hurt me when I’m in there. I fought with some injuries in my career, and I’ve won fights with serious injuries. At this point I know adrenalin’s a helluva drug and you’re gonna be all right when you get into that cage.”

Burkman admits that stepping back into the Octagon with Kim was “probably a little too fast,” but by this time, his son was born, his house was becoming a home, and life was beginning to settle down, setting the stage for a much different training camp for Cote.

“We’ve moved into our house, my wife is settled in our home, our kids are settled in our home,” he said. “We’ve had two boys in the last three years, we’ve moved four times, and there’s been so much going on in my life. But now I have specific coaches, I’m able to wrestle, I’m able to grapple, I’m able to do my sparring, I’m able to be at home, and this is the recipe for success for me. I’m healthy, and I think I’m healthy because my life is structured and I’m stable in my home, my family is stable, and I think that makes a big difference for me in my sport and how I perform and how I train.”

He sounds more confident than ever, even if he does wonder if his career would have gone differently had he approached things more rationally when it comes to injuries.

“How different would my career be if I would have made those choices to not be a fighter and protect myself and go into fights when I’m not injured?” he asks.

“You would never fight,” I joke.

“A lot of us would never fight, right? But I said for a lot of years that I was a martial artist and I was just performing. The last couple fights, I’ve felt like a fighter. And if our adversity comes through my martial arts and my job, I’ll take it. We’ve got healthy kids, I’m healthy, my wife’s healthy, and for the most part, all is well in life right now.”

A win will only make it better. Several wins? Now you’re talking.

“I’ve been on runs for three or four fights, and I was like that’s it right there,” Burkman said. “But I feel like my life is in a place where I’m about to go on the best run of my career.”