Seth Baczynski's Once in a Lifetime Fight 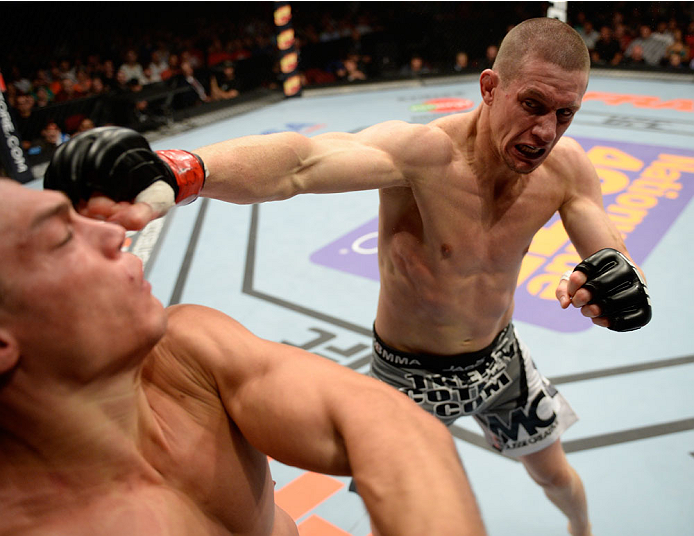 This is not just another fight for Seth Baczynski. It’s not just because he’s hoping to snap a two-fight losing streak when he meets England’s Leon Edwards on Saturday. It has more to do with place, with history, with a return to a place his family once called home.

“My grandfather was born in Illinois, but my great grandfather came over on a boat and settled in America,” Baczynski said of the Polish heritage he will revisit when he fights Edwards in Krakow, Poland. “It’s like a lot of Polish-Americans. They came here to get a better life, and we’re one of the few Polish families who kept their last name. A lot of people hyphened or abbreviated their name to get work because being an immigrant back then wasn’t very good. We even lost the language in our family. My grandfather said that his parents spoke Polish to him and they spoke Polish to each other in the house, but the kids weren’t allowed to speak it because they didn’t want them being discriminated against in school. It was a tough life when they came over here.”

The tough life, experienced both here and abroad, is often what produces fighters, and Baczynski is no different. A veteran of 28 bout in a career that began in 2005, he’s been fighting for much longer, and though he doesn’t forget the hard times, he’s embracing the fact that these days, the father of five’s life isn’t too shabby, with the business trip to Poland being the latest example.

“This is going to be a once in a lifetime experience,” he said. “A lot of people can’t afford to go over there, and if they could, they can’t get the time off work. So to be able to go over there and perform in the biggest arena in Poland, that’s an awesome feeling. I grew up in a trailer super poor. In every town we were in, we were always like the poorest people in there, and I remember the way we used to get looked at in grocery stores and stuff like that, that feeling of people looking down on us.”

That doesn’t happen anymore, and with ten UFC bouts to his name and a well-earned reputation as someone who doesn’t believe in boring fights, the main priority of the 33-year-old - who is coming off back-to-back Fight of the Night battles against Thiago Alves and Alan Jouban – is to find a way to turn those exciting fights into exciting wins.

“I look at everything as a growing experience,” he said of the defeats to Alves and Jouban. “Obviously I could have done some things to win, but I couldn’t look at this situation in any other way than as a professional. I’m going in, closing the cage door and I’m flipping the switch and it’s on. I’m performing at a high level. Obviously they didn’t go the way I wanted, but I felt like I performed and was executing the game plans perfectly.”

The Alves bout in April of 2014 was a nip-and-tuck stand-up war, both fighters getting in their share of shots for 15 exciting minutes before the Brazilian picked up the decision. Against Jouban, Baczynski rocked the California prospect early before getting rocked and stopped himself late in the first round. Welcome to the fight game.

“Going into both fights, I felt like I was right there,” he said. “With the Thiago fight, he’s just a very experienced fighter. That was a fun fight, I performed the way I wanted to, I just didn’t get the result I wanted. And the Alan Jouban fight, I was right there too. I had him finished, but I maybe lost my composure a little bit and tried to go to hard to finish. But your gift’s your curse. If you’re a beautiful woman, you get hit on by good looking guys, but you also get hit on by ugly guys. (Laughs) My gift is, when I get clipped or hurt, I don’t shell up. I throw down, and I didn’t move the right way and it cost me the fight.”

It’s as blunt an assessment you’ll get from a fighter. No excuses, no searching for a scapegoat. Years in the sport will give you that honesty, especially when you realize that when it comes down to it, what ultimately matters it what happens in the Octagon, not what you say before or after.

“In this game, when you’re competing at that level, you can do everything right, then make one mistake and you lose,” Baczynski said. “You can also do everything wrong, then the other guy makes a mistake and you win. So for me, it’s about getting everything in line, putting everything I can into every camp, trying to be the best I can, trying to evolve, trying to get better, going in and executing and doing my job as a pro. As long as I do that, I never feel like I ever lose. And whatever happens, I learn from it and try to get better.”

To aid in the process, Baczynski has settled in with the Alliance MMA team in San Diego, a change of scenery prompted by his friendship with former bantamweight champion Dominick Cruz, and a costly loss back home in Arizona.

“In 2013, my sister passed away and I was talking to Dominick, and I didn’t really want to be in Arizona,” Baczynski said. “I wanted to get away from everything and digest what happened. From growing up the way I did, I didn’t want to make the same mistake that a lot of my immediate family members have made and fall into that lifestyle of substance abuse. I was really uneasy about all that.”

He found his escape in San Diego, allowing him not just to clear his head, but to work with some of the best fighters in the game.

“It’s a very tough room,” he said. “They’ve always got good athletes coming in from all over the world, so that was a no-brainer because you’ve got a plethora of sparring partners coming in. They have a great team and I felt like it was the best place to advance my skill set. It was like a running back getting drafted into a certain offense. I felt like this team and the coaching staff and the style that they teach really fit me as a fighter.”

About the only negative of the whole scenario isn’t his two-fight losing streak, but being away from his wife and kids during camp.

“My daughter’s two now,” Baczynski said. “I get back and she’s saying full sentences, and I just feel like I’m missing so much. On the other hand, it’s a very demanding career, and my wife’s very patient. Both her parents are pro golfers, so she understands that it takes an extraordinary amount of work to be a professional athlete. Our lives our very demanding, we miss a lot of special occasions and holidays, but at the same time, it’s only a short period of time and when my fight career’s over, she’ll have a hundred percent of me.”

That career’s not over yet, and while the sacrifices are great, the payoff is well worth it for “The Polish Pistola.”

“I love this sport,” he said. “I love competing, I love putting it on the line and testing myself every day, and the older I get, the more I realize that it’s not just the fight that I love, it’s the process as well. I feel so lucky and blessed that I found something I actually love in life. Every day I’m happy and I’m riding it until the wheels fall off.”