Seth Baczynski - Keeping His Eye on Life's Most Important Things

"I stuck to the plan and worked as hard as I could and had faith that if I kept going and kept working, I’d get it together." - Seth Baczynski 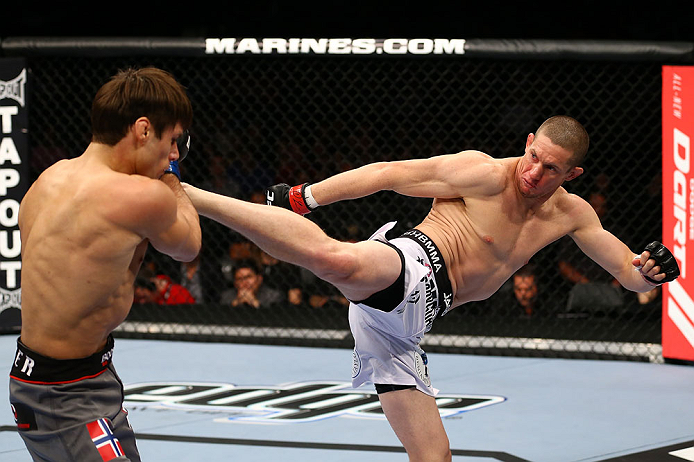 The days begin early for Seth Baczynski. 4:30am to be exact. That’s what happens when you’re a prizefighter, father, and full-timer for Liberty Utilities. Not that the UFC welterweight is complaining.

“The best part about getting up at 4:30 in the morning is that by the time I wake up, I’m already halfway done with my workout,” he laughs. “That’s the only positive I can find so far.”

He’s kidding…mostly. But what he’s doing in those early morning runs at the gym is setting an example for his five kids, showing the value of hard work, and getting ready for a fight this week in Australia against Mike Pierce that could propel him into the top ten if he can make it his fifth straight UFC win and seventh straight victory overall. That’s a lot to think about, but Baczynski uses that time to clear his head for the day in front of him. See Seth's video blog

“That’s how I get my head right and stay sane,” he said. “Doing my roadwork in the morning is kind of my only alone time in the day to reflect on anything.”

Then it’s off to work to “take care of different plants and troubleshoot problems,” before heading to Power MMA & Fitness in Gilbert, Arizona to put in another shift with the likes of Ryan Bader, Aaron Simpson, Tim Means, and CB Dollaway before going home to the family and finally grabbing a few hours sleep, just to do it all again the next day. He has no regrets.

“I know for a fact in my situation it’s made me a better person,” said the 31-year-old from Apache Junction. “It’s made me appreciate things more and it’s made me appreciate my fight career. I tell people all the time, you only have a few years in your life where you can actually compete at this level. I’m gonna be a father forever, but I’m gonna be a fighter for a short period of time, so it really helps me put things in perspective, and getting cut from the UFC the first time and coming back, I really enjoy the whole process right now. And I try not to take any of it for granted. There are guys at my job that come in and punch the clock every day, and they’re hardworking, good people, and they tell me how lucky I am to be able to travel and see the world and get to experience all these things. Growing up the way I grew up, I grew up extremely poor from a big family, and I would have never seen all these places if it wasn’t for fighting and the UFC and fighting for other organizations, so it really helps me keep it all in perspective, having to work so hard to do it. It makes me appreciate it more.”

A member of The Ultimate Fighter season 11 cast in 2010, Baczynski lost his first bout on the show to eventual winner Court McGee, was brought back to replace the injured Chris Camozzi, and then defeated Joseph Henle before being disqualified in the quarterfinals against Brad Tavares due to an illegal kick. Baczynski and Tavares rematched each other on the season finale card, but when the Arizonan lost a three round decision, he was cut from the UFC.

What followed was some soul searching for the six year pro, as well as an eventual drop to welterweight from middleweight. And after back-to-back stoppages of Tim McKenzie and Alex Garcia, and a full commitment to the Power MMA team, he received, and accepted, a short notice call to face Clay Harvison at UFC Fight Night in September of 2011. He hasn’t looked back since, winning four in a row in the Octagon, with submissions of Harvison and Matt Brown, a decision over previously unbeaten Lance Benoist, and a knockout of Simeon Thoresen.

“I think I finally just put it all together,” said Baczynski. “I never really had a home, and there was always a piece of the puzzle missing. And I think me just maturing as a fighter and as a person has been a big help. Just absorbing information and doing what I’m supposed to do every day, I stuck to the plan and worked as hard as I could and had faith that if I kept going and kept working, I’d get it together. I’ve got a great group of coaches around me, great training partners, and the gym’s growing every day. To be honest, I thought a couple times ‘man, look at all these other camps, they’re building all these great fighters at all these other camps,’ but I made the decision to stay in Arizona and build my own atmosphere like that and work with a bunch of good guys and build my own thing, and I’m happy I did. We’ve got a great group of guys and a great coaching staff and I really have to give it all to them because without all them, it wouldn’t be possible.”

Perhaps the most noticeable change in Baczynski’s fight night demeanor is that he’s fighting with an almost relaxed air about him. Not relaxed as in lackadaisical, but relaxed in that if something goes wrong, he’s not going to panic. He’s going to figure things out, find his way out of the jam, and then find a way to win. You don’t see that calm in many fighters on their second go round in the UFC, simply because they’re tense in anticipation that one wrong move could mean a loss and another release. Baczynski isn’t fighting like that…not even close.

“It’s one of the biggest things, just having the faith in your technique and not losing your composure,” he said. “And it’s tough out there sometimes when you get hit hard or you want to put on an exciting fight and you end up doing the exact opposite. And a lot of fighters have fallen victim to that. There’s a tremendous amount of pressure going in; all your friends and family want you to do good, and I think I just found my formula for dealing with it. Every fighter, coach, quarterback, athlete, whatever, they all have their little formulas, and I believe I found mine. I believe I found what works for me, and I feel like I’m growing every day and getting better and more confident in all my skills. Being put in those bad positions all the time in practice just gives you the confidence to know that you can fight through it and get through it, and it’s been working for me and I’m super stoked and looking forward to my career.”

The next destination in that career is the Gold Coast of Australia, where he will meet Mike Pierce in an important bout for both fighters on the verge of making a move at 170 pounds.

“Someone asked me what I’m doing to prepare for Mike Pierce, and I was like ‘what are you talking about man, I’ve been getting ready for a guy like this for four years,’” said Baczynski. “I literally got the snot beat out of me every day for four years, so I consider myself an expert on getting beat up by wrestlers (Laughs), so I feel well prepared for this fight. I’m not overlooking him or saying it’s an easy fight by no means, but I feel like I’ve been working out with guys that have the ability and style that Mike Pierce has for quite some time, so it’s going to be interesting to go out there when the blows are flying for real, and put all my skills to the test and see if what I’ve been doing is really gonna work.”

A win over Pierce would make Baczynski 3-0 in the big show for 2012, and set the stage for even bigger fights in 2013. But despite his success in the Octagon, don’t expect him to be handing in his resignation papers to Liberty Utilities anytime soon.

“Part of being a parent is sacrifice,” he said. “And I always told myself that I’m not gonna let my kids suffer because I’m chasing my dreams. If you would have asked me when I was 22, ‘hey, you’re gonna be in the UFC and you could just train and fight,’ I would have kicked the door off the hinges on the way out. (Laughs) But it’s an honor working with all these guys, and I’ve learned a lot. As you get older you obviously learn more, and they’ve molded me into who I am, I’ve learned a lot of good working habits that translate into working out, and if that day ever comes, when I was 22 I would have burned all tires going out of there, but now it would be a sad day because there are a lot of relationships I have at Liberty Utilities that I would be sad not to have by seeing those guys every day. They’re as much a part of my daily life as my family or the guys at my gym that are on my fight team.”

That’s the kind of perspective only fatherhood and time can give you, so it’s no shocker when you ask Baczynski about this week’s fight with Pierce and the possible difficulties of doing it in a foreign country where you may or not get acclimated right away. It’s a working man’s response.