There were no gifts or celebrations for Sergio Pettis on November 16, the first anniversary of his UFC debut, only more work as he prepared for Octagon fight number four against Matt Hobar this Saturday during the exlcusive UFC FIGHT PASS prelims! 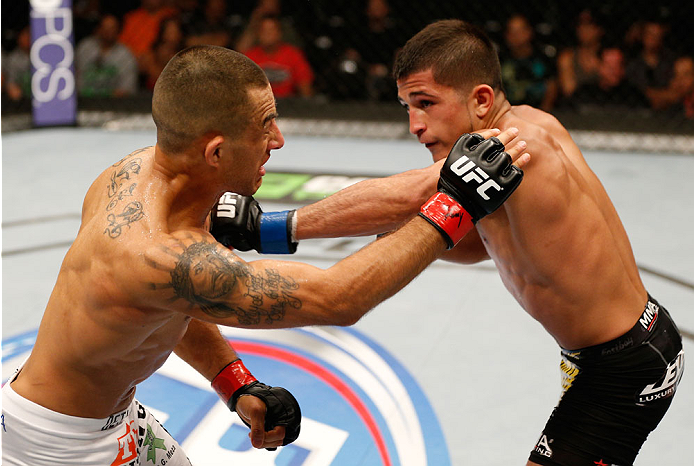 There were no gifts or celebrations for Sergio Pettis on November 16, the first anniversary of his UFC debut, only more work as he prepared for Octagon fight number four against Matt Hobar this Saturday in Las Vegas.

That’s not to say that anniversary went unnoticed, and looking back, the 21-year-old bantamweight had plenty to reflect on.

“This first year was definitely an experience,” he said. “I learned a lot and it showed in my performances how I progressed. I started off the year kind of slow, worked on some stuff I needed to for the 135 division, and I feel like it’s all coming together.”

You could say that the Milwaukee native has it together better than most his age, hence the nickname “The Phenom.” He has obvious talent in the Octagon, and outside of it, he has a refreshing maturity. Sure, he likes to laugh and enjoy himself, but he also knows when it’s time to get down to business, and that’s allowed him to deal positively with the extra attention that comes with being the brother of UFC lightweight champion Anthony Pettis.

“It’s a little different,” Pettis said of life in the UFC. “Fighting on these smaller shows, there’s not as much pressure. The UFC’s the NBA, it’s the big leagues, so people are expecting you to do great. Sometimes you’re not gonna have great performances, and it’s hard seeing people’s feedback on it. It’s a lot different, but my first year in, I’m slowly getting used to it, and I’m feeling a lot more comfortable.”

Currently 2-1 in the Octagon, Pettis’ decision wins over Will Campuzano and Yaotzin Meza could have been joined by a third victory over Alex Caceres if not for a late rear naked choke by “Bruce Leeroy” that ended the January bout with just 21 seconds to go. The two 135-pounders did get Fight of the Night bonuses, but that’s little consolation to Pettis, who suffered the first loss of his career on that cold night in Chicago.

“It haunts you,” he said. “I don’t think I’ll ever get over it. I knew I could win that fight, and I gave up on myself. That’s what happened, and I had to man up and understand that I could defend that choke. It wasn’t like I couldn’t defend it. I know how to defend the rear naked choke and I gave up on myself and that’s something I’ll have to live with, and I know for my next fight not to do that; not to put myself in that position and that mindset where I think the fight’s over.”

No one wants to get those harsh lessons, but if a fighter is to take his game to the next level, they’re necessary, and Pettis knows it.

“I learned a lot about the mentality of the sport in that fight. It’s not just physical. The mental part is so important.”

In his next bout against Meza in June, Pettis showed no mental hang-ups from his first defeat, winning a three-round unanimous decision. Now he’ll strap on the gloves to face fellow prospect Hobar, and he’s promising the best version of himself yet.

“Every time I go in the cage I want to show the crowd how I’ve improved, and every time I perform, that’s my goal,” Pettis said. “I’m not going to go out there and be the same fighter. Every time I fight, I need to keep progressing and keep getting more comfortable, and that’s something I’ve been working on. Everything outside the cage does matter, but when I’m in the cage I have to focus on my opponent, my game plan, and I have to go out there and have fun as well.”

And as far as fun goes, he admits to having plenty of it with his brother as they both prepare for fights on the same card for the first time since Pettis the younger was just 15 and an amateur kickboxer.

“It’s been all good vibes this whole camp,” he said. “We’ve had a great diet and we’re pretty much on the same plan. There are little competitions here and there, like who can do the most rounds, who can outrun the other, but it’s been a great experience. We haven’t had a fight on the same card since I was 15 years old, and it’s awesome that now it’s in the UFC. This is what we both looked forward to before we were in the UFC. Before our careers blew up, we always said ‘how crazy would it be if we fought together in the UFC on the same card?’ It’s a dream come true.”

But what if Sergio is the one who beats his brother to a post-fight bonus? Will that be worth eternal bragging rights? Nah, the 21-year-old just wants to win and then dig into the turkey dinner he was denied last week.

“It’s not bragging rights,” Pettis laughs. “Anthony’s got plenty of bonuses. He keeps finishing his guys, and that’s one thing I have to work on, finishing my opponent. That’s something he’ll catch me with, like ‘I’m finishing my guys, how ‘bout you?’ So he’s got the bragging rights on me right now, but after this fight and we both get our victories, I hope we can get to celebrate Thanksgiving.”