Sergio Pettis wants more than to be just a fighter, he wants to be champ 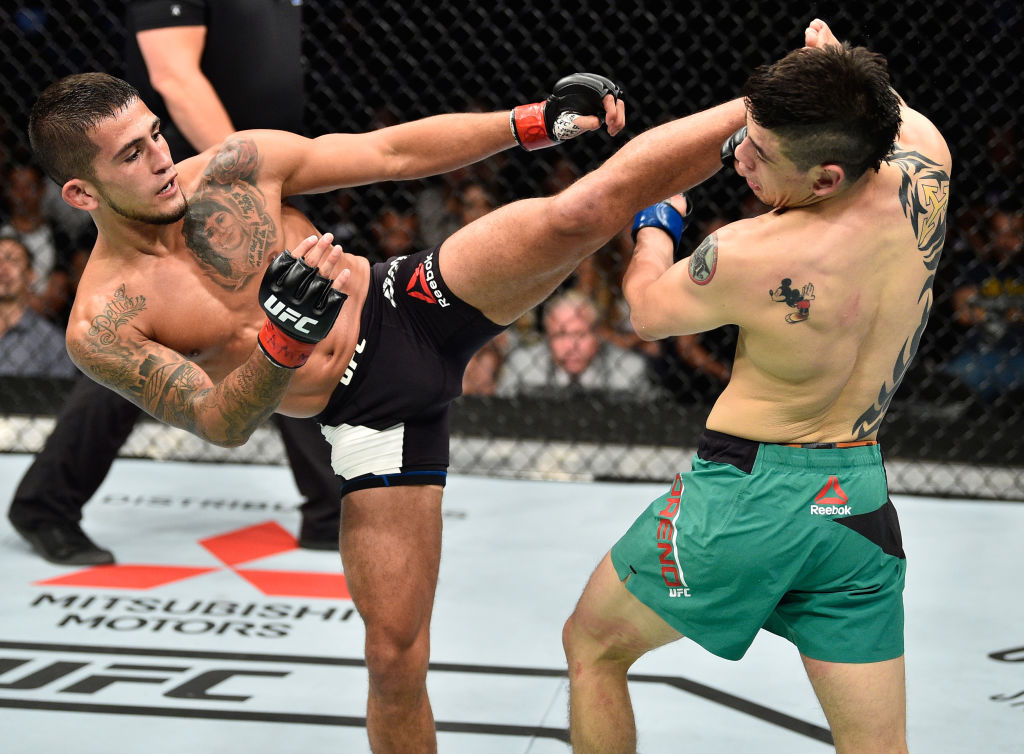 There are pros and cons to having a famous last name and following in the footsteps of an accomplished, acclaimed sibling.

Over the first three years of his UFC career, Sergio Pettis wrestled with that reality, arriving in the UFC three months after his older brother Anthony had ascended to the top of the lightweight division. Expectations were high, both because the then 20-year-old newcomer had amassed a 9-0 record with six stoppages over the course of two years on the regional circuit, but also because the physical and stylistic resemblance between the brothers was undeniable.

After earning a victory in his promotional debut, the younger Pettis stumbled, bookending victories over Yaotzin Meza and Matt Hobar with stoppage losses to Alex Caceres and Ryan Benoit, the latter coming on the same night his brother dropped the lightweight title.

“I definitely used to let that play into my head in the beginning of my career – ‘I’ve got to be Anthony,’ but it’s hard to be that guy, man,” he said with a laugh. “He’s got swag, he’s creative and I’m more of a technician out there. I keep to my game plan, no emotions and just focus on the goal – go out there and flow – and I’m getting better and better at it. I had to grow into myself.”

Since losing to Benoit in Dallas at UFC 185, Pettis has rattled off four straight victories to propel himself into title contention

in the flyweight division and set up a highly anticipated contest with former title challenger Henry Cejudo this weekend at UFC 218 in Detroit.

During his current run of success, Pettis has showcased a style all his own, eschewing the flashy offensive techniques that lace his brother’s highlight reel in favor of smooth, technical striking and a patient, tactical approach that plays to his strengths and belies his age.

It has taken time, but Sergio Pettis has become his own man, both personally and professionally.

“I had to find a way that was suitable for me and that made sense for who I am, not being Anthony Pettis’ little brother,” he said. “I love being Anthony Pettis’ little brother – the guy’s amazing and I have no shame about that – but at first, I used to kind of frown upon it and feel like I had to live up to everybody’s expectations. Now I’m just living up to my own expectations and I feel strong on where my path is taking me.

“When I was younger, I was very insecure about myself, honestly,” added the 24-year-old contender. “I would view myself in a non-confident way. Now I’ve worked on that and I don’t care so much about the external road. Internally, I feel stronger and I think that’s why I’m performing to my capabilities. I’m going out there with no stress, no tightness. I’m going out there and being water; I’m just flowing.”

The shifts that Pettis has made and his growth as a fighter has been on full display this year, as he started his 2017 campaign off with a unanimous decision win over John Moraga before rebounding from some rough patches to collect a similar verdict against Brandon Moreno in his first UFC main event back in August.

The opportunity to face Moreno only fell into his lap after a previously scheduled clash with Cejudo was scuttled when the Olympic gold medalist was forced to withdraw at the 11th hour with a hand injury. Though he was frustrated at the time, Pettis now sees the delay as a major positive and believes it has put him in an even better position as he readies to face Cejudo Saturday night at Little Caesars Arena.

“The John Moraga fight taught me how I can take a pretty decent punch – take a good hit and return one back – but against Moreno, I faced adversity and I think that really helped me grow a lot,” said Pettis, who spent the entire first round of the five-round affair fending off choke attempts after getting taken down in the opening moments of the first. “I came out very slow, threw a sloppy kick and he took advantage of that and that’s something I had to be aware of for this fight with Cejudo, to make sure I’m going out there and throwing to my full potential and not second guessing.

“Obviously at the time I was pissed off, but there is no resentment towards him,” Pettis said in regards to his cancelled bout with Cejudo at UFC 211 in May. “I have nothing against my opponents. I understand stuff happens in the fight game and it was a blessing in disguise. It was supposed to happen – I got the main event against Brandon Moreno and I got more time and experience to be ready to fight a man like Henry. It gave me more time to improve and gain more confidence and now December 2nd, we get to go out there and handle business.”

After arriving on the big stage at a young age, saddled with expectations and stumbling out of the gate, Pettis has found his footing, become his own man and emerged as a legitimate championship contender in the flyweight ranks.

It has been a circuitous journey to this point, but one that has proven well worth it for the 24-year-old Milwaukee native, who believes he’s now reached a point where he’s ready to prove he’s one of the best fighters in the sport.

“I’ve got my game to where I’m a complete mixed martial artist; not to my full potential, but to making it so I’m not just a striker, not just a grappler,” said Pettis. “I’m everything and I’m ready wherever this fight goes. I have a goal to finish this fight – I’ve been to a lot of decisions and my goal is to put on a great performance for Detroit and try to get this finish; I believe I have what it takes.

“At a younger age, I was more excited to just be in the UFC and than wanting to have the responsibilities of becoming one of the greatest fighters in the UFC,” he added. “But I know I have the skill set to become a champion and to become one of the best in the UFC and now I have the mindset too. I think everything is matching up and it’s perfect timing because I’m ready for the responsibilities.”