"Now that I’m fighting bigger names, I have to prove myself. Now it’s time for me to have my own journey, which is awesome." - Sergio Pettis 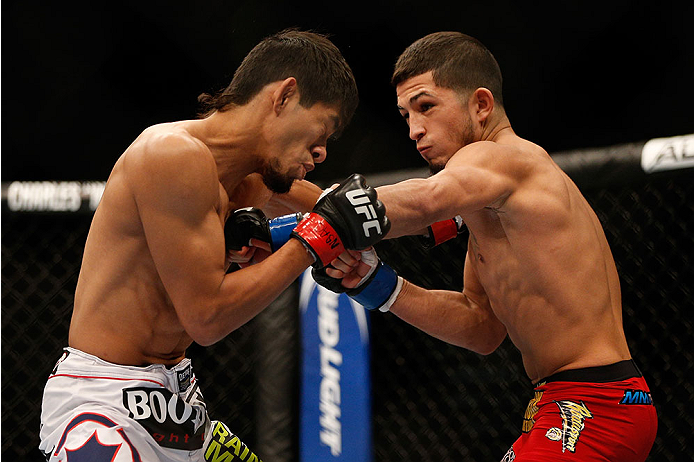 Very few 20-year-old fighters have been thrust into the spotlight the way Sergio Pettis has since being signed by the UFC last summer.

Before he even set foot in the Octagon, the unbeaten Duke Roufus student was being sized up and broken down, his championship potential dissected before he’d done anything on the sport’s biggest stage; the blessing and the curse of having a world champion for an older brother presenting themselves simultaneously.

On one hand, being identified as “Anthony Pettis’ little brother” brings the kind of recognition and attention most twenty-something fighters couldn’t pay to acquire, as the older brother’s success and rise to stardom reflects down to a younger sibling he’s been hyping for years.

On the other hand, sharing the same last name and baring a strong resemblance to one of the nine individuals wearing UFC gold also brings expectations - the standard developmental timetable thrown out the window, an accelerated climb into contention both assumed and anticipated.

It’s a blessing and a curse all rolled into one, and something that the 10-0 Pettis is ready to continue dealing with as he embarks on his own career in the UFC.

“It adds pressure; it really does,” admits the affable bantamweight prospect. “I have a big name to live up to - Anthony’s doing amazing things, and he’s an amazing martial artist, so it’s going to be hard to live up to his name and the expectations that come with the last name Pettis, but it’s not negative pressure. It makes me want to be a better fighter, makes me want to mature faster.

“The first fight was really hard, man,” says Pettis, who earned a unanimous decision win over Will Campuzano in his promotional debut at UFC 167. “I’m not going to do the things they want me to do - jumping off cages like a ninja. I’m trying to use (the attention) in the right way, trying to stay positive with this. People are talking about me, which is awesome. I just started my career and people know me, so I’m just going to live it out and see how it goes.

“I just have to go out there and keep winning fights - have great performances, finish fights, and enjoy the ride. I don’t want to always worry about the pressure of being Anthony Pettis’ little brother. It’s a positive and a negative. I’m my own fighter. I’m my own individual. Anthony is the same way - he’s got his style, I’ve got my style - and it’s just a matter of time before I break away from it. I’ve only had one fight in the UFC and I’m only 20 years old, so I’ve got plenty of time.”

While he’s spent his formative years training alongside elite talent under the watchful eye of Roufus and headlined shows on the regional circuit, nothing can prepare you for what it’s like to step into the Octagon for the first time.

“It was very, very different,” laughs Pettis in regards to his UFC debut. “A lot more cameras, a lot more people there, and I’m glad I got that out of the way. Now it’s just going to be easy sailing. I feel comfortable now and I’m going to continue to grow in this sport.”

His performance against Campuzano - a former WEC and UFC fighter unbeaten in his previous five fights heading into UFC 167 - highlighted why many have predicted big things for the UFC newcomer, as Pettis swept the scorecards against his more seasoned opponent, showcasing crisp striking and clean technique in running his winning streak to double digits.

As far as Pettis is concerned, it was mission accomplished.

“I think your debut is one of the most important things in anyone’s career. It doesn’t determine the career if you lose in your debut - Anthony lost his UFC debut and came back to become champion - but I just wanted to keep my record clean, no blemishes.”

With his unbeaten record intact and the first fight jitters behind him, Pettis returns in the final preliminary card bout of this weekend’s UFC on FOX event in Chicago, squaring off with Ultimate Fighter alum Alex Caceres in a bout that will air live on FOX Sports 1.

Five years his elder and with eight UFC appearances already under his belt, the 25-year-old Caceres represents a step up in competition for Pettis, and is more than capable of stopping the young talent’s momentum dead Saturday night at the United Center.

Just as he’s trying not to let the pressure of his last name and inflated expectations of the MMA community get to him, Pettis is only looking at the positives of being the final pairing of the preliminary card, and aiming to make the most of his opportunity inside “The Madhouse on Madison.”

“I’m going to be on TV now and a lot more people are going to be watching, but I don’t try to think about that much. That’s going to add pressure on to me, and then I’m not going to be able to perform to my full capabilities.

“I still haven’t performed to my capabilities 10 fights in,” he continues. “I’m maturing into this sport, and starting to understand everything about this sport, and it’s just a matter of time before I blow up and make a name for myself.

“Hopefully with this fight being on TV, I can do that, but without putting any extra pressure on myself. I want to just go out there and be like water; just flow.”

Paraphrasing Bruce Lee in advance of a meeting with “Bruce Leroy,” the 20-year-old is composed beyond his years, having been groomed for this since his early teens - another one of the positives that come with following in your older brother’s footsteps.

But now that his teenage dreams have become reality, the younger Pettis is eager to keep forging his own road, building his own name every time he steps into the Octagon, a journey that continues against Caceres.

“I’ve been training for the UFC since I was a kid, and now that I’m here, there are little extra details that have changed a little bit, but the training has always been the same; it has always been intense.

“I grew up around Anthony when he was in the WEC and the UFC, and seeing how hard he trains motivated me. I was training with him at a young age - 15, 16 - going through gauntlets, being the only guy that was 16, everybody is heavier than me. I learned a lot. I learned how to deal with the mental part of it and the physical part of it, and just being on that journey with him taught me a lot.

“Now that I’m fighting bigger names, I have to prove myself,” he adds. “Now it’s time for me to have my own journey, which is awesome.”