Sergio Pettis: Saturday I'm Going To Get This Knockout 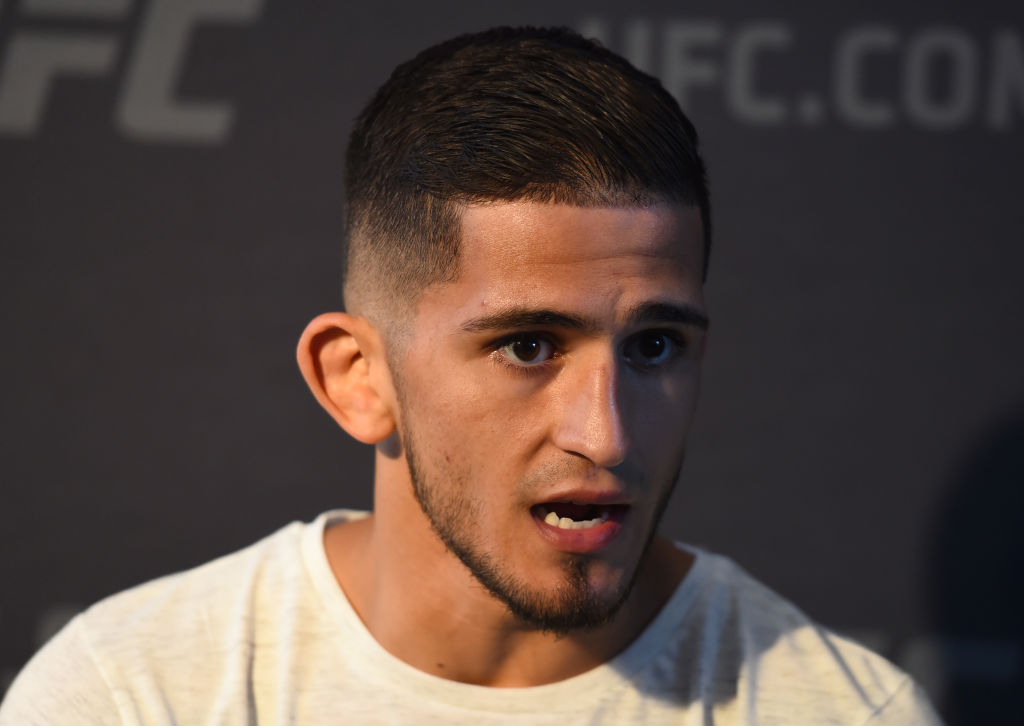 Great fighters create legacies through hard work, spectacle and winning. Sergio Pettis has never lived in the shadow of his big brother, former champion Anthony Pettis, but rather used his bond with Anthony to improve as a fighter.
And it’s paying off.
In June, Sergio took on and defeated longtime flyweight contender Joseph Benavidez by split decision at UFC 225. It was the biggest win of Sergio’s career and has the aftermath has lit an even bigger fire in him since that day in Chicago.
Here’s what Sergio had to say about fighting Jussier Formiga, his brother, fighting at UFC 229, his energy, the state of the flyweight division and more.
UFC: Fight week is here. How are you feeling heading into weigh-ins and Saturday?
Pettis: I’m feeling great, I feel ready. Great week so far I feel the energy of this place. It’s going to be a great week.
UFC: What’s it like for you to be on a card with so much attention?
Pettis: Oh it’s amazing I’ve been blessed to be on a lot of great cards. I’ve been on a GSP card, Jon Jones card and a Conor McGregor card. It’s awesome.
UFC: We recently spoke with Anthony and he said that he’s seen a different fire burning inside you since the Joseph Benavidez fight. Why is that and how has it helped you grow heading into this fight?
Pettis: I just set goals for myself. At the beginning of my career I was just kind of going through the motions and didn’t have any real goals or a plan to be better or the strive to become a champion. But now I do and that’s what’s going to happen.

Listen to @ShowtimePettis talk about his brother @SergioPettis and what he has seen from him since he defeated Joseph Benavidez at UFC 225 #UFC229 pic.twitter.com/nEKjpdDmzD
— UFC News (@UFCNews) October 4, 2018

UFC: What was it like to start your career kind of in the shadow of Anthony and how has that helped your career?
Pettis: In the beginning I let that play in my head a lot I was like ‘oh man I’m just the brother, I can’t live up to that expectation’ that I was thinking at the time so I was really negative about it. But now I view it as a positive way. He’s done so much for my career and he helps me become better and I help him become better. It’s a team effort, it’s amazing that we get to be at the highest level of this sport and compete together be on the same cards. It’s everything we wished for.
UFC: Do you feel that you haven’t received the attention that you deserve?
Pettis: I guess I’m not viewing it that way, I still feel like I have to make my way in. I’ve been in some good fights, a lot of my fights have been going to decision but now I got to go out there this weekend and get the job done in spectacular fashion so they talk about me and want to see me fight and want to see me perform. I’m not saying it’s negative, I just need to get my job done on Saturday.
UFC: Do you think the mental part of the fight game is just as important of the physical part?
Pettis: The mental part of this game is so important, I didn’t really tap into that at such a young age. If you visualize what you want and have a set plan to get there, you’ll get there.
UFC: How do you visualize Saturday?
Pettis: This Saturday is going to be the best performance I’ve had up to date. I believe that. I know I’m going to go out there and do this, this Saturday I’m going to go get this knockout.

UFC: Tell me about Jussier Formiga. How do you feel about the match-up?
Pettis: Well everyone knows that I have the advantage standing I take control of my range, take control of the striking portion. But Jussier Formiga is a black belt jiu jitsu, amazing on the floor, not only that he has clean technical striking. People don’t look at that. He has really clean numbers, clean striking, clean details. He’s an all-around fighter but everyone I’ve been fighting is that way I’m at the top of the top and I’m that way as well. Now I’m just going to go out there and do it and be better than him.
UFC: Talk to me about the flyweight division. How do you feel about it now that Demetrious Johnson has been dethroned?
Pettis: Honestly I was upset that I wasn’t the one who defeated Demetrious Johnson, but Cejudo went out there did a great job, great performer. I’ve competed against him and gained a lot of experience from that fight. It’s cool to have a shuffle of the deck, Demetrious was on a tear for a while and we’ll see if he can come back and do it again. But it’s amazing and it’s a new goal for me.
Gavin Porter & Zac Pacleb are writers and producers for UFC.com. You can follow them on Twitter @PorterUFCnews and @ZacPacleb.