Sergio Pettis: Ready to be the Shark 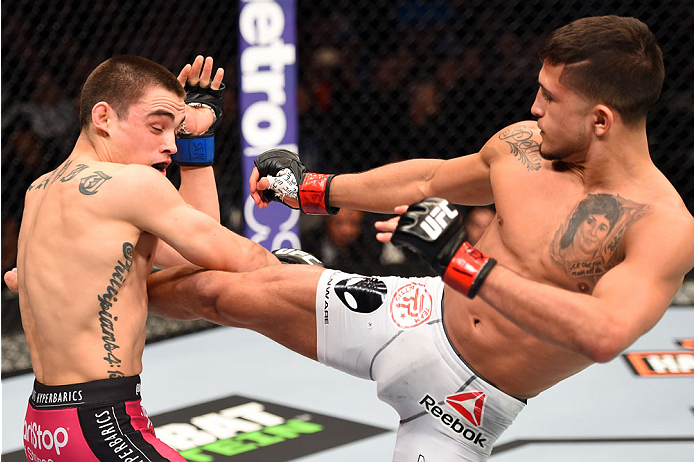 It was a retirement that didn’t garner much fanfare, but when Sergio Pettis put his nickname “The Phenom” on the shelf, it had a lot deeper meaning than just deciding to go with the name his parents gave him.

“There are a couple people with the name “Phenom” out there, and I got a lot of negative talk about that, so I said I don’t even want to have a nickname,” he said. “I want to be known for who I am. I’m Sergio Pettis and I’m here to make a name for myself.”

That task hasn’t been easy, but Pettis knew that entering the UFC as the younger brother of former lightweight champion Anthony “Showtime” Pettis was going to come with plenty of pressure and some extra scrutiny that wouldn’t be headed in his direction if his name was Sergio Smith.

That was almost two years ago. And if you haven’t accepted the Milwaukee flyweight as his own man by now, he doesn’t really care. He knows who he is.

“My first couple fights, it was hard,” Pettis said. “I was only 20 years old and I felt the pressure. I would go out there thinking I had to be Anthony and I had to be a flashy fighter. I had all this pressure on me, and honestly, it was pressure I put on myself. I’m 22 and I still have some learning to do, but I feel like I found myself a little bit more. I love myself and who I am as an individual and my perspective on life and in the Octagon. I had to find myself and be myself out there. I’m not Anthony. I’m his little brother, we look a lot alike (Laughs), but we’re completely different fighters inside the Octagon and different people outside the Octagon as well. And I had to find that and I had to understand that my time will come, and with the right work and right preparation, I will be Sergio Pettis and not Anthony Pettis’ little brother.”

There is no bad blood between the Pettis brothers, no reason to read between the lines and wonder if there is trouble in Wisconsin. Simply put, Sergio Pettis had to grow up in public, and now that he’s reached the ripe old age of 22, he realizes that being himself is more than good enough to one day bring him to a world championship.

Of course there is still work to be done, work that continues this Saturday on UFC FIGHT PASS when he battles Chris Cariaso in UFC 192 action in Houston. It’s Pettis’ first bout since a second-round TKO loss to Ryan Benoit in March. Seven months is a fairly long layoff for a young fighter on the rise, but it’s also one Pettis says was beneficial.

“I wanted the break, honestly,” he said. “I had to do some self-searching. I took a loss that was pretty substantial. He (Benoit) caught me with a good punch and I had to go back to the drawing board and clear my head a little bit. But that made me realize how much I love the sport. It’s almost like a surfer. You go out there and almost get attacked by a shark. Do you want to stop surfing or do you get back on that board? That’s how it was for me. I got attacked by a shark and I’m ready to go back in there and be a shark myself now. I understand the mental side of the game a lot better after that loss.”

It is important to point out that before he got attacked by that shark, he was beating it, and it was the same story in his only other loss – a third-round submission defeat at the hands of Alex Caceres in January of 2014. In that bout, Pettis was on his way to a decision win before getting caught in a rear naked choke and finished with 21 seconds left on the clock. Yes, both were legitimate losses, but Pettis must take some solace in the fact that he didn’t get beat up for three rounds or blown out of the water in seconds. Nah, he’s a fighter, and a loss is a loss, no matter how he gets it.

“From any loss I think you learn a lot about yourself,” he said. “My only two losses were in fights I was winning. I’ve just got to go out there and once I smell blood in the water, I’ve got to attack a little bit more and be more of an aggressive fighter. I’ve gone in there wanting to be too perfect, I think, and that made me be more passive-aggressive. Now I’ve just got to be more technical and have a smart aggression out there.”

But how does that love of the sport come back, especially after such a heartbreaking defeat?

“After the fight I got a little depressed,” he said. “It was a big loss to me in the field that I love – standing up. I love going out there and being the superior striker, but I made a mistake and got caught. So I took the time off and watched the fight multiple times throughout the days and I’ve accepted it. It made me love the sport more. When you lose, you can go one way or another. You can take it in a negative way and draw away from the sport, or you can take it and try to make it into a positive thing. It was a life lesson. I won’t get caught like that ever again. I know what to prepare for and I know the little mistake that I made, the little detail that I needed to fix, and that made me go back to the drawing board and want to be a better mixed martial artist.”

Pettis sounds excited about fighting these days, especially since he’s coming back with a fight against the number 10-ranked Cariaso. That’s a big deal for a prospect like Pettis, who has never faced a contender before, and with a win, he will make a significant statement in his division.

“With a win over Cariaso, I think that puts my name out there a lot better,” he said. “I always wanted to fight Cariaso. I’ve seen this guy fighting since I was in high school and he was in the WEC. I’ve seen him fight a lot, and now I get to fight him. It’s an opportunity for me and I’ve got a lot of respect for Cariaso. He’s a great martial artist and a great veteran who’s been around for a while. He just fought for the title, and it’s a big step up for me, and I think this is my time to shine.”

From the darkness of March to the light of October. Funny what seven months can do in this sport. But Pettis is even more ambitious about 2016.

That’s a big year for Sergio Pettis. No Phenom necessary.