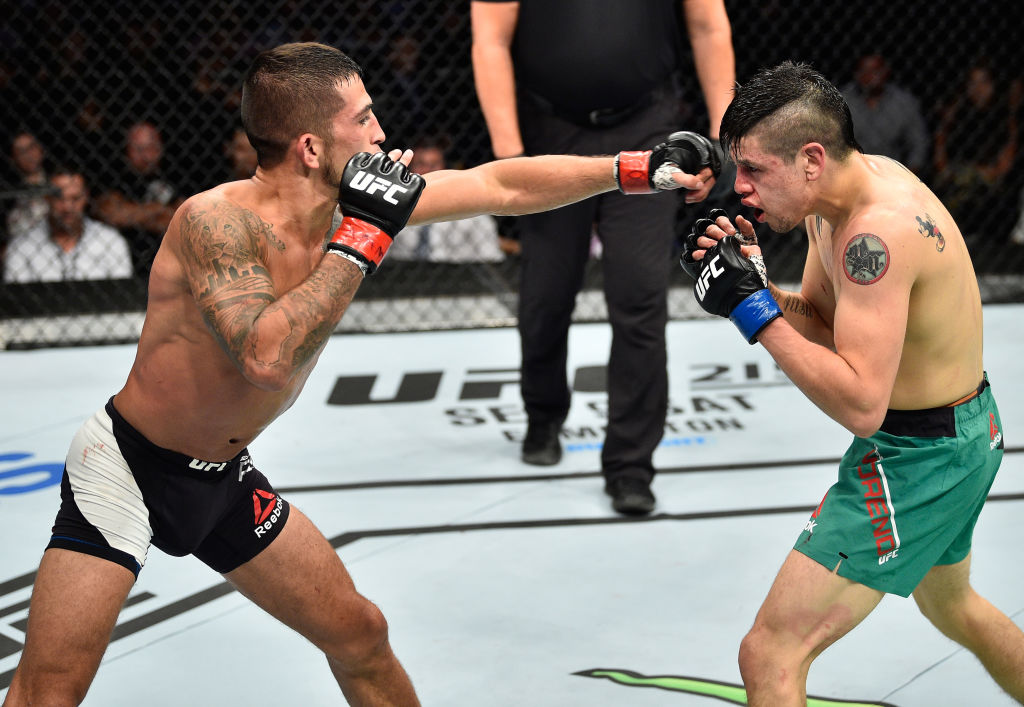 Sergio Pettis</a> punches <a href='../fighter/brandon-moreno'>Brandon Moreno</a> of Mexico in their flyweight bout during the <a href='../event/UFC-Silva-vs-Irvin'>UFC Fight Night </a>event at Arena Ciudad de Mexico on August 5, 2017 in Mexico City, Mexico. (Photo by Jeff Bottari/Zuffa LLC)" align="center" />PETTIS vs MORENO

In a clash of 23-year-old flyweight contenders, Sergio Pettis survived an early scare against Brandon Moreno to pound out a five-round unanimous decision victory in the UFC Fight Night main event at Arena Ciudad de Mexico on Saturday night.

“I definitely had to face some adversity. He came out there and put me in a very dangerous situation, I stayed calm and I had four more rounds to prove that I’m better than this man and I did it,” Pettis said.

After throwing a few kicks to open the fight, Moreno caught one of Pettis’ and put him on the mat. Pettis was calm on the mat, but in a scramble, Moreno was able to take his back with a little over three minutes remaining. Pettis’ defense was rock solid, but he wasn’t able to escape before the end of the round, and he went back to the corner with a cut as well.

Pettis landed two hard head kicks early in round two, but Moreno used the second one to take the Milwaukee native back to the mat. This time, Pettis was able to briefly try a triangle choke before scrambling to his feet, and his disciplined striking attack allowed him to control the majority of the frame.

In the third, Pettis began to take over in a big way, with his technical striking allowing him to tag Moreno repeatedly with hard punches and kicks while also cutting his foe over the right eye.

The fourth was more of the same, and while Moreno kept charging forward, his aggression was far from effective.

Moreno got a takedown to kick off the fifth and final round, and he kept Pettis locked up until 90 seconds remained in the fight. There was still enough time for another surge from the “Assassin Baby,” but it was Pettis who controlled the standup down the stretch and secured his victory.