Sergio Moraes - Proud to be a Mixed Martial Artist

"I went to the house as a jiu-jitsu fighter, and today I can tell you that I'm an MMA fighter." - Sergio Moraes 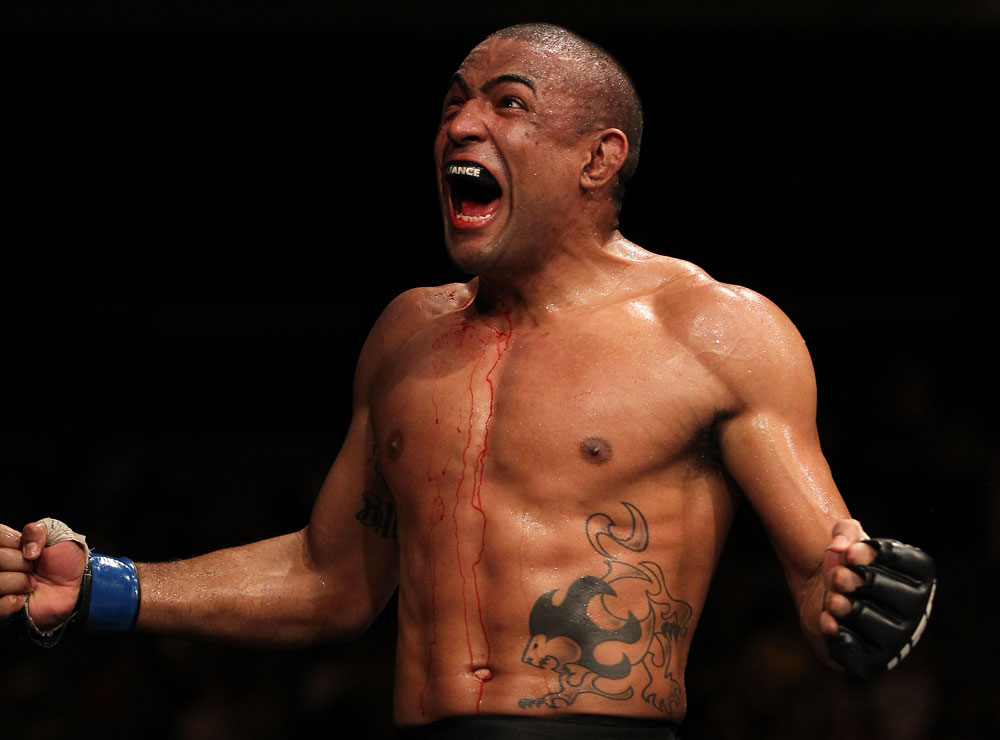 Few gave Sergio Moraes much of a chance against Cezar “Mutante” Ferreira in the Ultimate Fighter Brazil final at UFC 147 in June. He had already been eliminated from the tournament in the semifinals, was being brought back to replace the man that beat him (the injured Daniel Sarafian), and if you said the world jiu-jitsu champion was a bit one-dimensional heading into the fight in Belo Horizonte, that would be an accurate statement.

But after taking whatever coach Vitor Belfort’s number one pick could throw at him, Moraes fired back. Not with a takedown or some slick submission attempts, but with a right elbow. Ferreira staggered and staggered some more, trying to clear his head as Moraes wildly chased him around, trying to pull off the upset as the crowd roared.

So what was going through his mind in these hectic moments? Did he think the end was near?

“The end was near for who?” laughed Moraes through translator / manager Julio Heller. “The guy hurt me too. ‘Mutante’ is a great fighter and he has my respect, but to be honest in the second round I had my chance. But it’s okay. I wanted to fight standing; I needed to prove to myself that I could do it. It gave me a lot of confidence and my mental strength showed me that I can fight in the UFC.”

Ferreira would survive the second round onslaught, and despite getting briefly caught a couple times in the final stanza, he did enough to take the unanimous decision win and the TUF Brazil title. But on a night when several Brazilian fighters took to the biggest stage in mixed martial arts to show their wares, Moraes might have emerged as the one you definitely wanted to see fight again. Sure, his standup was raw, but he has world-class jiu-jitsu and heavy hands, and the joy he showed in the midst of the 15 minute battle was something to see. On Saturday, he’s back for his second go-round in the Octagon against fellow castmate Renee Forte, and the way he sees it, at welterweight, he will show what he can really do in the UFC.

“(The fans should expect) A complete MMA fighter,” said the 30-year-old. “This is my chance to be in the UFC, in the right division, and I will give my best to prove that I can be a UFC top fighter.”

A native of Sao Paulo now living in Curitiba, Moraes’ skills and reputation on the mat are well-established. A three-time jiu-jitsu world champion in the black belt division (he also has a world title at brown belt), “The Panther” owns a 2008 victory over Rickson Gracie’s son Kron, and though he had dabbled in MMA since 2006, it soon became more than just a side job.

“It was the challenge,” said Moraes of competing in MMA. “I reached the top in jiu-jitsu and it was time to prove that I could go higher.”

Winner of six of his first seven pro bouts, five by submission, Moraes got a chance to accelerate his progress when he was selected to compete on the first season of TUF to be held in Brazil. Originally a member of Belfort’s team, Moraes (who won two fights on the show before being eliminated by Sarafian) was later switched to Wanderlei Silva’s squad, and not surprisingly, he called his time on the show, “the best experience in my life. I must tell you, it is amazing how much you improve as an athlete and person in 40 days. Facing so many tough fighters is very important in measuring your limits.”

After losing in the semifinals, Moraes was still going to get a shot in the Octagon against Forte. But when Sarafian got injured, he instead received the opportunity of a lifetime as the first replacement opponent in a TUF final. He fell short of victory that night, but now he’ll get to meet Forte this Saturday in Rio de Janeiro.

“Renee is a good guy,” said Moraes of his foe. “I didn't have any problem with anyone in the house, and living in the same house for 40 days and training together you can see the strengths and weakness of each one, but to be honest I didn't have much time to think about that, so my training didn't change so much.”

What he does expect though, is that Forte will try to test his luck where he may believe the jiu-jitsu ace is at his weakest – on the feet.

“I know that he has a good jiu-jitsu game and is good standing too,” said Moraes. “But I think that he will try to keep the fight standing.”

For some longtime jiu-jitsu players that might be an issue, but given Moraes’ strong effort against “Mutante” and a full camp with Andre Dida and former light heavyweight champ “Shogun” Rua and his team, his confidence is soaring.

“For the TUF final I just trained 40 days in Curitiba with Andre Dida and Shogun Team, but now I made a complete three month camp here in Curitiba and my standup game is much better,” she said. “I want to prove that I'm a MMA fighter. I got in to the house as a jiu-jitsu fighter, and my main goal is to prove that I have skills to be a top MMA fighter.”

And working with one of Brazil’s best ever has him improving by leaps and bounds. Yet as he points out, “It’s not been in the last few years, but in the last few months. (Laughs) It is a pleasure to have Shogun as a training partner; he has a lot of experience and he is a real team member that wants to see everyone around improving every day. I usually say that the guy is a "war tank"; he never walks behind, he just walks to the opponent, and he always looks for the fight. He is amazing.”

Now it’s Sergio Moraes’ time to represent his team and show just how much he’s improved since June. He can’t wait.

“Today I'm comfortable in the Octagon, and I’m confident and prepared for any situation. Like I told you, I went to the house as a jiu-jitsu fighter, and today I can tell you that I'm an MMA fighter.”