Serghei Spivac Treats Each Fight As The First

Emerging heavyweight Serghei Spivac has been following the old adage that “iron sharpens iron” as best as you probably can over his last several fights, including this one, as he readies to step into the Octagon against veteran stalwart Aleksei Oleinik on Saturday.

Ahead of his February triumph over Jared Vanderaa and again in preparation for this weekend’s contest, the 27-year-old “Polar Bear” has logged time on the mats and in the cage with two of the division’s elite — reigning champ Francis Ngannou and Top 5 standout Alexander Volkov.

“I liked training in Las Vegas,” said Spivac, who has made use of the UFC Performance Institute ahead of his last two fights while also spending time at Xtreme Couture. “Francis is a very good, kind guy. As for his fighting qualities, I can say that he is a real champion — very strong, fast; you can see how Francis is growing and constantly developing.

“I like to go to different gyms, train with different fighters,” continued the up-and-coming talent, who has won three of his last four and back-to-back contests since dropping a unanimous decision to streaking Polish veteran Marcin Tybura early last year. “Now where I train there are a lot of very good heavyweights. 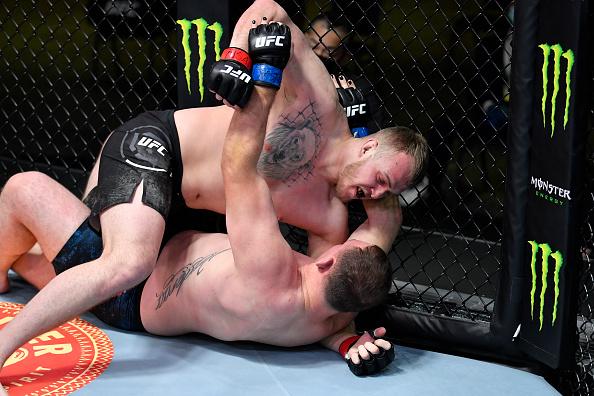 Serghei Spivac of the Ukraine punches Jared Vanderaa in a heavyweight bout during the UFC Fight Night event at UFC APEX on February 20, 2021 in Las Vegas, Nevada. (Photo by Chris Unger/Zuffa LLC)

“Alexander Volkov has the most achievements and he often helps us in training,” he said of the towering Russian contender, who returns to action later this month in a main event showdown with undefeated French standout Ciryl Gane. “He is a good person and as an athlete, he’s very hardworking, disciplined.

“He has fire, he wants to become a champion,” he added of his training partner. “You can see it and he is on his way to making it happen.”

Surrounding himself with championship-level training partners is sure to help Spivac level up as he continues to work his way up the divisional ladder, but seeing those he’s working with standing at the top of the division hasn’t changed how he approaches his career one iota.

Despite a dominant effort last time out and his last setback aging rather nicely given Tybura’s ongoing success, the heavyweight prospect continues to look at each new assignment as his first inside the Octagon, remaining locked in on the task at hand and refusing to think about anything beyond the next man slated to stand across from him inside the UFC cage. 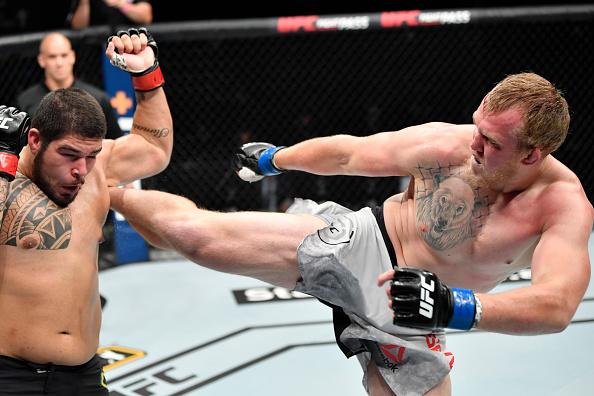 “Each fight is like the first for me,” began Spivac, who lost his promotional debut to Walt Harris a little over two years ago in Ottawa, Ontario, Canada. “This is the best organization in the world and there is always pressure, so we train, we develop; we do not stand still.

“I do not like to run ahead, to plan something,” he added. “I will work, continue to try to develop and grow, and then it is as God wills. Our sport is very unpredictable and there are many different factors that affect each fighter, each fight, so I just try to stay healthy and prepare properly for my fights.”

This weekend, he gets to put those preparations to the test against one of the elder statesmen of the division, as he steps in opposite Oleinik in his first co-main event assignment.

Oleinik is 16 years Spivac’s senior and began his mixed martial arts career before Spivac celebrated his second birthday. Over the course of his 25 years in the sport, the 43-year-old Oleinik has logged 75 professional appearances. 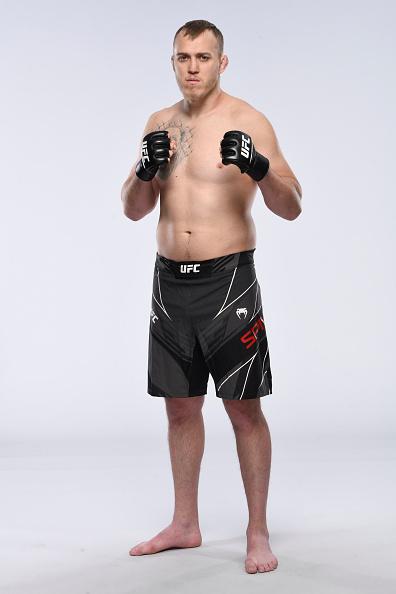 Serghei Spivac poses for a portrait during a UFC photo session on June 16, 2021 in Las Vegas, Nevada. (Photo by Mike Roach/Zuffa LLC)

Saturday’s contest is a step up in competition for the 27-year-old Spivac, and the kind of pairing that could propel him into the Top 15 if he were to come away with a third consecutive victory.

“Aleksei is really a very experienced, persistent fighter,” said Spivac, who fought on the same card as his opponent earlier in the year, kicking off the show with his second-round stoppage win over Vanderaa before Oleinik fell to Chris Daukaus midway through the main card.

By all measures, this weekend’s contest is a crucial point in the career development of the emerging heavyweight — a matchup with a tenured, seasoned veteran, higher on the fight card than he’s ever competed before, with the potential to bust into the rankings if he’s able to extend his winning streak to three and hand Oleinik a third consecutive setback.

Despite the obvious divisional ramifications and future opportunities a victory could unlock, Spivac remains steadfast in his quest to keep things as simple as possible, focusing exclusively on the task at hand and not worrying about anything other than handling his business inside the Octagon this weekend.

“It won't mean anything,” he said when asked what beating a veteran like Oleinik would mean to him at this point in his career. “All the best guys are gathered in this one organization, so I don’t think about that; I just focus on walking in in the right condition and with a good attitude.”