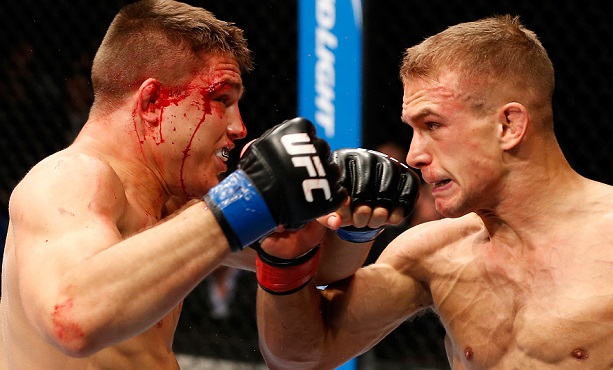 German fans got a treat in UFC Fight Night prelim action at the O2 World Arena in Berlin Saturday, as one of their own, Cologne newcomer "Sergeant" Nick Hein, lived up to expectations with a hard-fought unanimous decision victory over fellow lightweight prospect Drew Dober.

Hein’s potent left hand was on target at the start, opening a cut over Dober’s right eye. A takedown from the world-class judoka followed in the second minute, with Hein working for an arm triangle. Dober did his best to keep his foe from advancing on the mat, and he soon made it back to his feet. Dober kept his forward motion intact, ultimately clinching with Hein against the fence, only to get taken down again for his trouble.

Dober’s striking was solid in the second stanza, but once Hein got a grip on him, he wasn’t about to let go. Once the lightweights hit the deck though, Dober was able to reverse position and get on top, using his ground and pound attack to end the frame strong.

The cut suffered by Dober in the first round got progressively worse in the third, masking the Nebraskan’s face in blood as he looked to press the action. As the two worked against the fence, referee Marc Goddard had the Octagonside physician check the cut, but Dober was cleared to continue. Dober pressed forward with a clear sense of urgency, yet even as he got some shots in, the heavier blows were landed by the southpaw Hein, who staggered his foe a few times before the conclusion of the bout. 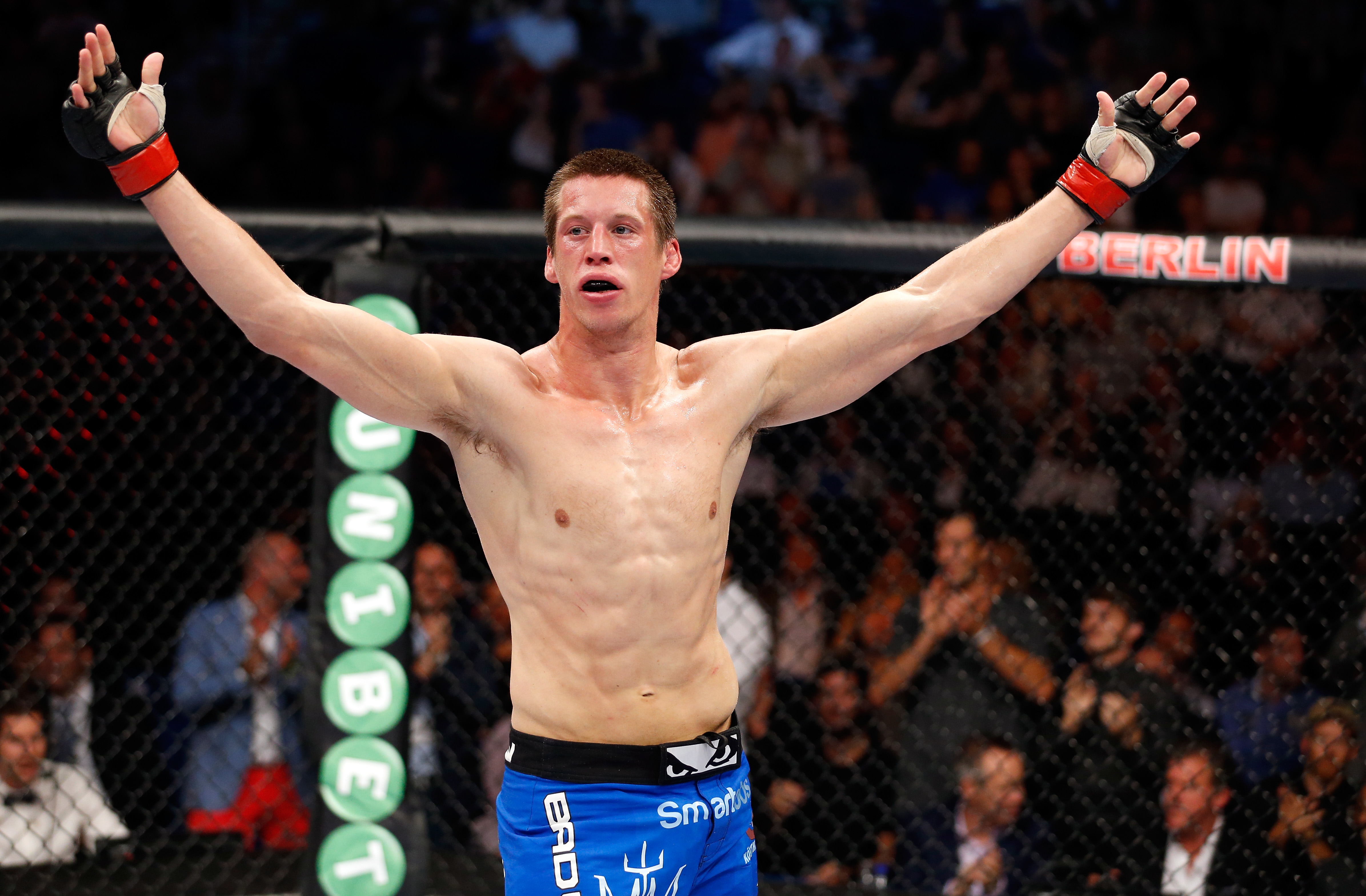 Both fighters got after it at the opening horn, Jotko on the attack, Cedenblad countering well. Subsequently tying up against the fence, Cedenblad took control briefly before Jotko reversed position. It was Cedenblad who got the takedown though, and the Stockholm product went to work. The action stalled for a spell, allowing Jotko to work back to his feet, but it was only a brief respite, as Cedenblad put him on his back again before the bell.

Grappling was the name of the game in round two as well, with Cedenblad dominating much of the way until Jotko found some daylight and started implementing his own ground game in the final two minutes, nearly sinking in a rear naked choke before Cedenblad rebounded and caught the Poland native with a choke of his own, a guillotine that produced a tap out at 4:59 of the round. 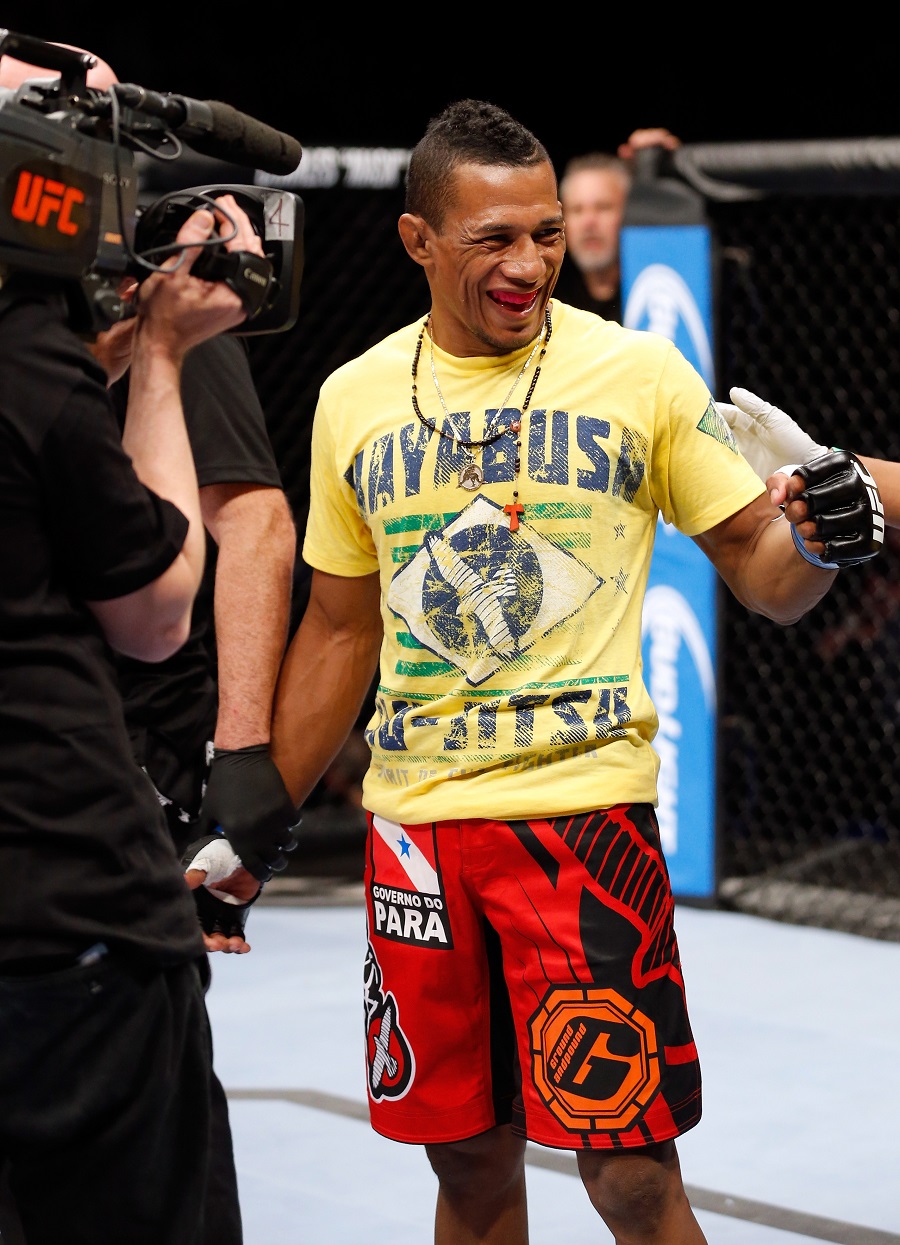 Iuri Alcantara was explosive and impressive in his bantamweight bout against England’s Vaughan Lee, knocking his opponent out in just 25 seconds.

Lee, a grappling ace who showed off an impressive standup in his previous fight against Nam Phan, looked just as confident with his striking as the bout began, but in the second exchange of the fight, a left caught Lee on the top of the head and sent him to the deck. The follow-up barrage from the Brazilian brought in referee Grant Waterman to halt matters moments later.

Germany’s Peter Sobotta may have had to go the distance for the first time in victory, but he’ll gladly take it, as he won a three-round unanimous decision over previously unbeaten Polish newcomer Pawel Pawlak in the welterweight’s first UFC bout since November of 2010.

The crowd was in the corner of Geislingen’s Sobotta, and he responded with an array of kicks to begin the fight, confidently picking at the newcomer and showing his ease under the bright lights of the Octagon. Pawlak, nose bloodied, did come on late, but it was clearly a round for the Germany product.

A wild miss by Pawlak gave Sobotta the opportunity for him to score his first takedown of the night in the opening minute of round two, and as both fighters stayed busy with strikes on the mat, Sobotta kept trying to improve his position. And though Pawlak’s defense was tight, he wasn’t able to get back to his feet until the horn to end the round, also taking a headbutt in the process that Sobotta received a warning from referee Leon Roberts for.

After some solid stand-up exchanges to begin the last frame, Sobotta got two takedowns in the second minute, keeping Pawlak grounded until a restart by Roberts with 20 seconds left. By then, it was too late for the Lodz native to turn things around.

With the win, Sobotta improves to 14-4-1 as he picks up his first UFC victory in four tries; Pawlak falls to 10-1.

The unanimous decision read 29-28 across the board.

Pre-fight talk about Blanco always surrounds his ability to bring chaos to the Octagon, and he did just that, running out of his corner at the bell and dropping Ogle with a flying right kick. Ogle took plenty of hard shots on the mat, bloodying his mouth in the process, but Ogle found his way out of trouble and scored a takedown, eventually taking Blanco’s back. Blanco reversed well with two minutes left and got back to his feet, Ogle staying locked on until the two broke with under 90 seconds to go, finally allowing the bout to slow down to a steady pace.

Blanco got off to a similarly fast start in round two with a takedown and a kick to the head as Ogle rose, but the Newcastle native responded well to it, getting a takedown and taking the Venezuelan’s back again. After spending much of the round looking for a rear naked choke, Ogle got reversed late, with Blanco ending the frame in the top position.

After a rough majority of the second round, Blanco bounced back in the third, picking through Ogle’s often porous defense with a variety of strikes, bloodying his foe’s face as he picked up an important and much needed victory. 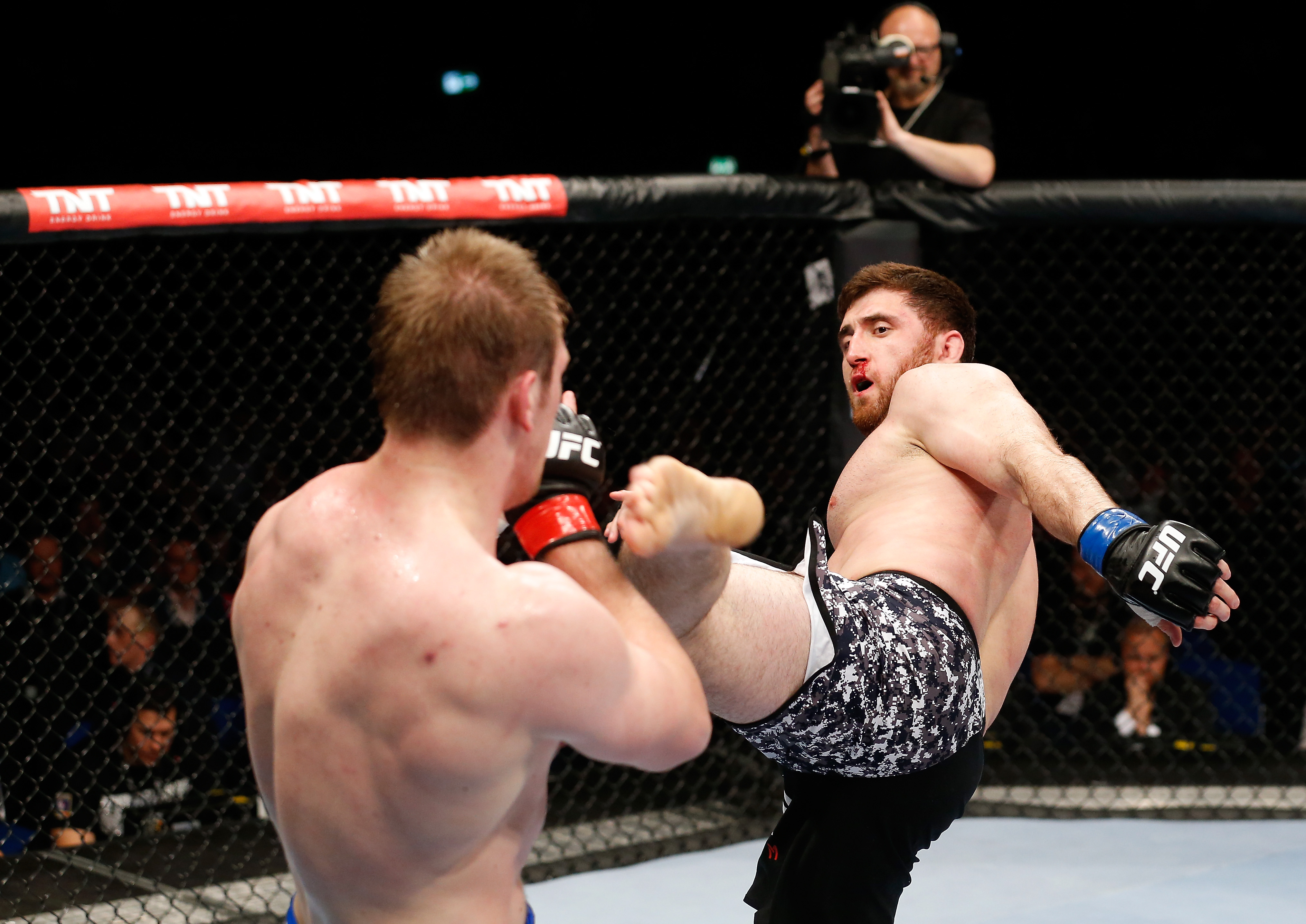 Clearly the better technical striker of the two, Magomedov (12-1) took a while to find his range, but midway through the opening round he found it, rocking Pesta with a right hand followed by a left head kick. Pesta (9-1) shook loose the cobwebs though, and after weathering the follow-up assault, he dropped Magomedov to the deck with a left knee to the head. The fight was now in Pesta’s world, and he piled up the points with his ground and pound attack.

Magomedov landed some slick kicks in round two, Pesta taking them well before putting his foe on the mat. Magomedov got back up quickly, and he was able to keep it standing for the rest of the round, picking his shots with little worry for what was coming back at him.

Getting more and more into a rhythm as the fight progressed, Magomedov tossed off two third round takedown attempts from the tiring Pesta, allowing him to keep his stand-up game intact, and though the Dagestan native tagged him with hard shots, Pesta took everything well. Tough wasn’t going to be enough on this night though, as Magomedov took the nod by identical scores of 29-28.