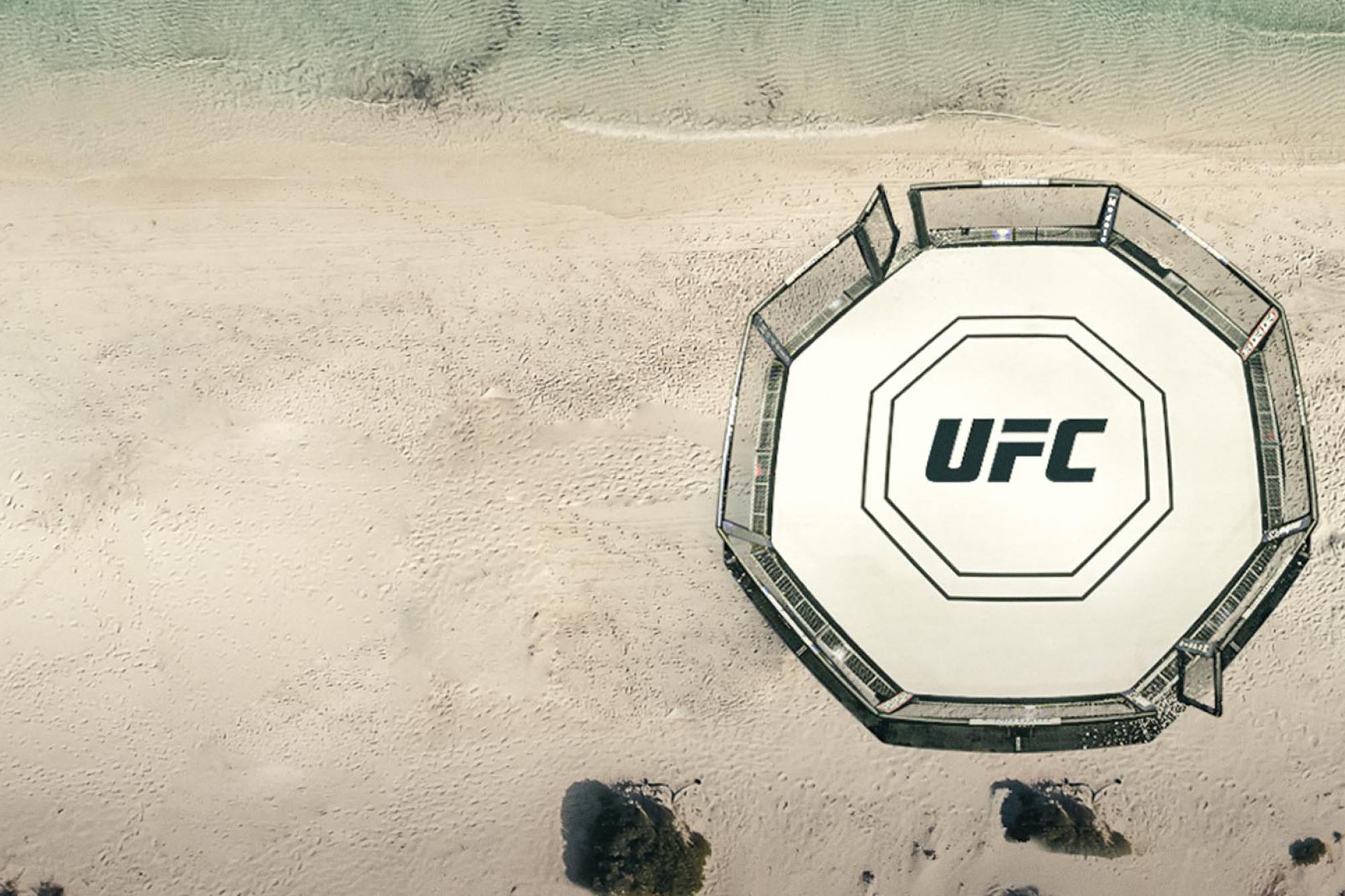 Fight Island may be the most unique location in Octagon history, so let's trek back at some other spots fighters have been to in the past.
By Zac Pacleb, on Twitter: @ZacPacleb • Jul. 6, 2020

Fight Island is real, and it is finally here. After months of rumors comparing it to the likes of Mortal Kombat, Bloodsport, or any other cult-classic combat movie, four events are scheduled to take place. An Octagon is actually built on the beach, as Dana White promised, and the nearly 10-square-mile safety zone is set to create a safe environment for fisticuffs amid the coronavirus pandemic.

While it’s probably safe to say no mixed martial artist has competed in circumstances like these, they’re most likely the most adept at fighting in unique situations. Coming up through local and regional mixed martial arts promotions leads to some strange, at times incredibly awkward, environments. With that in mind, we asked fighters to spill tales of the most memorable places they fought, and while none might compare to Fight Island, they stretch the limits of the “anywhere, anytime” mentality many mixed martial artists boast.

“Probably Poland. Definitely Poland. Everything there is built for little people, and the food… And it’s like they don’t believe in creature comforts, at least not in the hotels. Your appliances blow up when you plug them in, even with an adapter. They don’t have shower curtains, and their little, tiny bathtubs are elevated off the ground, so water goes everywhere, and you cannot bathe properly and cut weight properly. It’s very special.”

“I fought in the BT studios in London. I think it was 2016 or something, 2015. That was a no-audience thing. I think they let 50 people come in, and you had to show your ID. Once 50 was in, they locked the doors. I feel like I’ve already fought in this type of thing. Obviously not to this extent, but I feel like I’ve fought in this type of thing before. That was pretty weird then. Other than that, every experience is different. Every country you go to with the UFC is different. Every opponent is different. They’re all individually weird in their own way.”

“Seriously, I remember walking out. I took a heavy cut in the fight. I ended up winning. It was this guy I beat who was on The Ultimate Fighter. I never took a cut. I remember I could literally hear people in the crowd speaking. Not even shouting. Just speaking. You took a punch, and you could hear, ‘Ah, did you see that?’ S*** like that. It was a bit surreal. It felt like you were back in school with your people watching.”

“I fought in a parking lot once. They put a ring up in the parking lot … They just decided to put a fight on, and they put the cage there. It wasn’t like a special place, particularly. They just threw it together. It was in Greensboro, North Carolina.”

“I fought outside before. I’ve had to fight twice in one day before at an outside show. The first fight was hot as balls, and the second fight was at night, and it was the main event, so it was cold. It was kind of the extremes of both. The sun was beating down in our first fight, and luckily, I got the job done in two or three minutes. The second fight, as I was walking out, I was freezing cold. That was kind of an interesting situation. Being able to adapt to that, I’ve got a little bit of experience adapting to the weather. Another situation, I fought outside again, and it started raining. That was weird. Bring on the elements. If I’m dealing with it, he’s dealing with it, and I’m still tougher than him.”

“It was in Russia. There was a strange city. I was in Kursk. The place wasn’t so strange, but the way to Kursk was very weird. A very old train took us to this place, and it was strange, but it was good. Every experience is important to me.”

“I think fighters are a little more inclined to what you’re saying because I couldn’t see the Lakers going to go play in a schoolyard court in some other foreign country just to play basketball, or racetrack drivers being like, ‘Racers gotta race,’ and making a homemade track on an island. But for fighters, what you go through every day – life is a fight. Facing an obstacle and being able to overcome it. That happens in life, in jobs, in sports, and in its most purest form in a real fight. I think we’re used to those unique situations. To answer the question, I guess I did fight in a weird bar setting on the floor that was just a mat on the floor. They put some makeshift ropes around it like when Jean-Claude (Van Damme) fought Tong Po in Kickboxer style. It was just kind of like a rope. We were warming up in an open section of the bar, so it was just blocked off for us to warm up in before we walked out. People could watch us warm up and drink right by us, talk to us, whatever. So, it was a blocked off area of the bar where we’d go fight at, and I fought there. That was really weird. Just warming up in the bar, you walk through the crowd, you fight on the floor. One of the funny things about that one is I was wearing underwear from Target to fight in, and I went out, and I fought the guy. It was normal for me. I elbowed him to finish the fight, and I was the first fight. After that – this is how makeshift it was – a security guard was there, and a cop, and their rule was, ‘Hey, that didn’t look safe. The rest of the guys have to wear headgear or they can’t fight.’ And they’re like, ‘What do you mean? It’s MMA. They’re grappling. They can’t just do that.’ And then they’re like, ‘Well you can’t do those elbows.’ They couldn’t comprehend that we were just elbowing each other, and then, they were just like, ‘The headgear is going to definitely work.’ After that, my teammates were mad at me because they’re like, ‘What the heck? We have to wear headgear just because of this?’ And it was a security guard and a police officer making their own rules, like, ‘I’m going to shut it down if they don’t wear protective gear.’ That happened for the rest of the card. It was in a tiny, tiny city in New Mexico that even living in New Mexico, I’d never really imagined was there, at some weird bar.”

“Probably a baseball field. It was pretty weird. There were dust footprints from the fighters walking, and that was weird. It was in the middle of Ohio at a baseball field. Also, my first MMA fight was the week after Hurricane Sandy, so I remember during fight week, it was kind of similar to what’s going on now where you’re kind of uncertain the event is going to happen. I remember all week during fight week, they were like, ‘The event is still going to happen, right? Some places don’t have electricity,’ and it all worked out. That was definitely interesting. I think I fought in Hungary once, and that was two fights in one night. I’ve seen a bunch of different stuff. I’ve been around it for a while. We’ve all been through many years of craziness before we got to the UFC.”

“It’s not the weirdest, really. In Alaska I went to a fight that a bunch of my teammates were on. For one thing, it was PRIDE rules, which was insane. It was in a ring, which was crazy. It was MMA and boxing matches on the same card. Everybody warmed up in a barn and then went and fought in this tent. It was crazy.”

“Probably when I went to Brazil. I went and fought in Brazil, and it was in a tent outside of a hotel. There was a big marquee outside of a hotel. It was more of a private event, I suppose, but I warmed up pretty much aside to my opponent. I got my hands wrapped beside my opponent. We could see everything each other was doing before the fight. We were talking to each other as we were getting our hands wrapped. That was probably the weirdest situation. But the fans were great. They cheered for me as well as him, so I can’t complain, really. That was the weirdest one. Every kick he did on the pad, every punch he did on the pad, I could hear everything. That was a bit of a weird one. It was the main event as well, so it was fun, I suppose. An experience.”

“Girls were never allowed to fight that much in England, so when I was, it was more like to the book in gymnasiums and stuff. (I fought in) a working man’s club. People were allowed to smoke back there, and I was boxing. I was the first ever girl to represent my boxing gym, and he said, ‘All my mates are out there. Don’t f****** embarrass me.’ And I was like, ‘Wow, OK.’”

“In my amateur career, I competed at Poopy’s Pub & Grub against a girl that was supposed to weigh 135. I found out the week of that she was actually 145, and she missed weight. So, they made her weigh in the next day at 150, and this is a big girl. She was a boxer. I fought at Poopy’s Pub & Grub, a biker bar. We fought outside, in the rain, and it was called the Skidmark Arena because it was called Poopy’s. Our rules meeting was like, ‘Yeah, you know the things they do in the UFC? It’s just like that.’ I’m like, ‘Holy s***, are elbows and knees allowed?’ ‘I don’t know.’ I just took her down and submitted her really fast.”