"I’m just ready to unleash on some people and make some people pay for the way I had to learn." - Mackens Semerzier 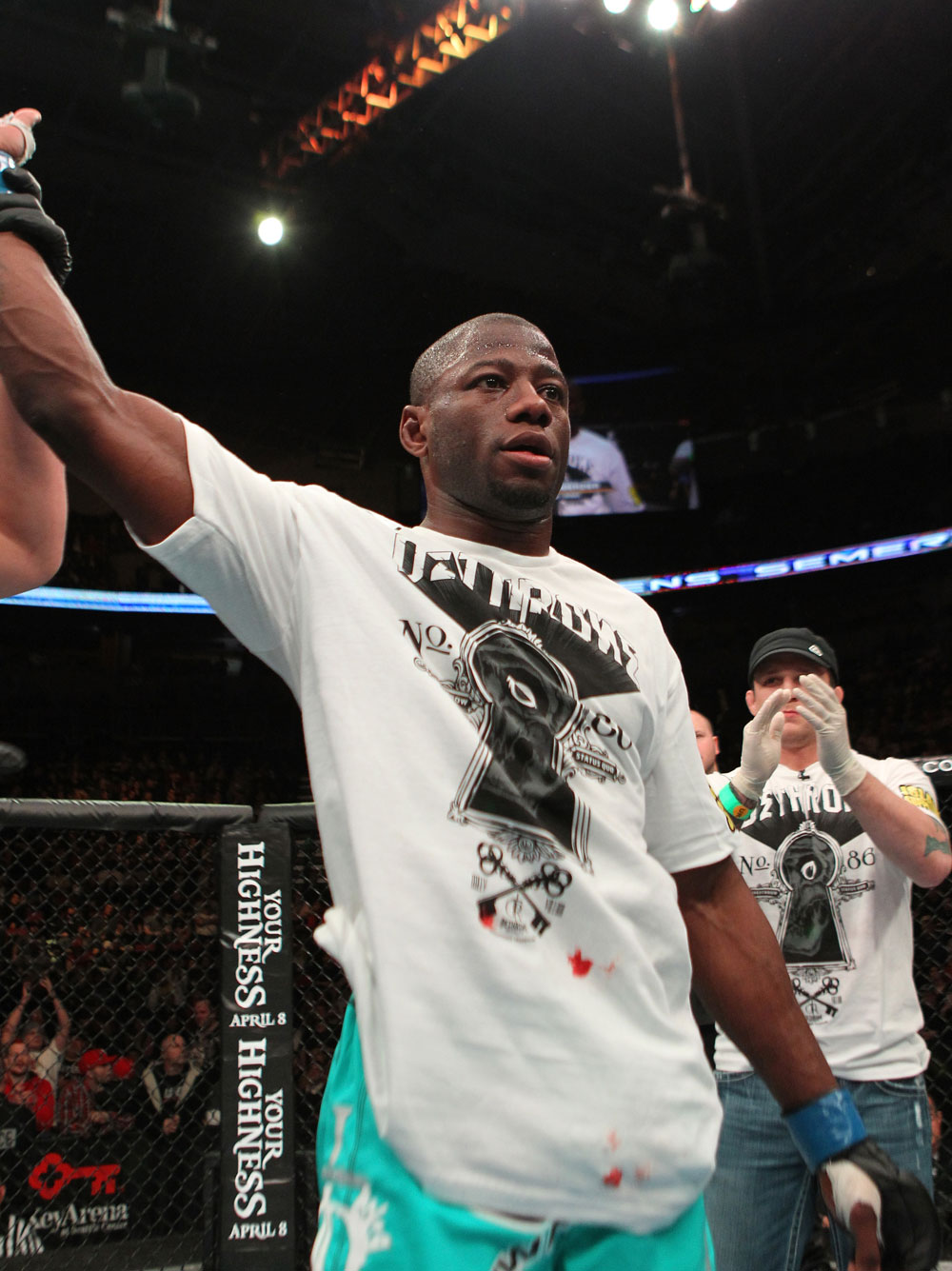 Things were going just fine for Mackens Semerzier on November 12, 2011. He was in a close and competitive bout with Robbie Peralta, and as the third and final round progressed, “Mack Da Menace” had seen his opening and he was ready to make his move.

“I remember us fighting and him switching to southpaw,” said Semerzier. “But he’s not a southpaw. He turned southpaw because he has some bad mechanics and bad habits. He overshoots his right hand, so he steps forward with his right foot and he ends up in a southpaw stance. He kinda fakes it like he’s gonna do something, and then he steps back, so it’s a great opportunity to throw strikes at him because that’s not his natural stance, and he’s not gonna be as fast defending on that side. I pulled back, pulled back and kinda baited him to come in, and I was gonna throw a left and then a really hard right.”

All the while, Peralta fired away on his downed opponent, eventually prompting referee John McCarthy to halt the fight at the 1:54 mark. Semerzier had been knocked out for the first time in his career.

Or did he? Replays showed that the knockdown Peralta scored wasn’t with a fist, but with an inadvertent headbutt that looks more and more painful with each viewing. The California State Athletic Commission eventually ruled the bout a no contest, and Semerzier got the type of experience fighters usually have to take a loss to get. Not that it’s any real consolation for the United States Marine Corps veteran. But he does find some positives in his 12th pro fight.

“I was proud of myself that in a moment when I was completely out of a fight, I had the natural instinct to continue to fight, which was really cool,” he said. “I didn’t lay down because my head hurt. My subconscious took over, which means I’ve done the work and I was mentally and physically prepared, and subconsciously, I continued to fight and try to complete my mission. So I take that from it and I’m proud of that.”

He is critical of what happened before the final sequence though, blaming over aggression for leaving himself open.

“Instead of staying and letting the fight come to me, I tried to force the action and make something happen instead of letting it happen,” he said. “I tried to speed up the process of winning, and I paid for it. That part frustrates me personally.”

But like any good athlete, you take a disappointing result, wring out a lesson or two from it, and move on. The way Semerzier sees it, fights like the one against Peralta are the price you pay for growing up on the big stage, something he’s done since he debuted in the WEC in October of 2009 with a stunning submission win over Wagnney Fabiano. Since then, it’s been one test after another, and while he’s had his ups and downs, going 1-3 in the WEC and 1-0, 1 NC in the UFC, he’s still standing heading into Friday’s bout in Sydney against Daniel Pineda, a late replacement for Peralta, who was injured and had to pull out of the rematch.

“I got to taste a little bit of everything,” said Semerzier, 8-3, 1 NC, of life in Zuffa. “I got the taste of my phone ringing off the hook with people wanting to talk to me, I got the taste of my phone not going off and no one wanting to talk to me (Laughs), I’ve been excited about training, I’ve been bitter about training, I’ve seen the bright, I’ve faced the hatchet, I fought my heart out, I’ve earned post-fight bonuses, and I’ve done a lot in a good amount of time.”

And the biggest lesson he learned is that he can hang with the big dogs in the featherweight division.

“I trust my training,” he said. “I feel like I’m training with the right people, the best people available to me, and I just have to trust my training and go out and not get caught up in the name or the numbers of the people that I’m fighting. I don’t think there’s anyone I would be put in front of in a cage that I would not fight. I wouldn’t cower or shy away and I’m just not too scared of people.”

That doesn’t mean he’s dismissive of anyone though, and in the veteran Pineda, he knows he will be in for a fight.

“He’s a scrapper and he goes out there and finishes,” said Semerzier, 31, of his foe, who comes into the bout with a six fight winning streak and a 97 second submission win over Pat Schilling in his UFC debut in January. “He’s also been finished a couple times, so that tells you he’s going for the gusto. He doesn’t hold back and he’s not there to play a point game. He’s aggressive and he’s trying to win, so I’ll be ready for that.”

He’ll also be ready to pull out his submission game against the Texan, who has been forced to tap out in six of his seven losses. That’s right up Semerzier’s alley, and when asked about his 2012 plans, his goals are simple: three fights, three wins, and three post-fight bonuses. That’s not too much to ask, is it?

“I just want to really show people how I’ve matured in the sport,” he said. “I’m happy to have grown up in the Zuffa organization fighting the best guys available. I think it’s made me tougher and I’m just ready to unleash on some people and make some people pay for the way I had to learn. I had to learn the hard way and now people have to pay.”