The Surging Bantamweight From Georgia Looks To Continue His Rise At UFC Fight Night: Ryeyes Vs. Prozachka
By MCKENZIE PAVACICH, ON TWITTER @MPAVACICH_ • Apr. 29, 2021

The thing Merab Dvalishvili looks forward to doing most after a win is sitting down to enjoy a hard-earned soda. Sometimes it’s ginger ale, other times it’s Sprite, but regardless, it’s one of his favorite things about fighting, second to the fighting itself.

“The feeling after a fight, when you win, the couple of hours before you go to bed, it’s amazing,” Dvalishvili explained. “Because in your head, you're confident [and relieved] that you did everything you needed to; you trained hard and so you just get to relax and enjoy the moment.”

It’s a familiar feeling for “The Machine,” who rides a five-fight win streak into this Saturday’s matchup against Cody Stamann at UFC Fight Night: Reyes vs Prochazka.

“I feel great. My weight cut is much better this time,” Dvalishvili told UFC.com during a fight week interview. “I can’t wait to make weight and fight on Saturday.”

After nearly five months of pivoting mid-camp to prepare for new opponents due to various unforeseen circumstances, Dvalishvili and Stamann have come full circle to finally fulfill their bantamweight bout that was originally slated for the UFC Fight Night: Hermansson vs Vettori card in December.

“We were supposed to fight in December, my fourth fight for 2020. I was excited for this but unfortunately the same opponent, Cody Stamann, pulled out and we could not fight,” the Georgian said as he unfolded the breadth of scheduling difficulties he and Stamann have faced due to COVID, medical suspensions and a handful of other reasons. “Finally, we are fighting and Saturday, we’re going to find out who’s better.”

Unbeaten in three years, the 12th-ranked bantamweight has spoiled the lengthy win streaks of three of his opponents, including a six-fight streak of Casey Kenney’s, and he dominated UFC veteran John Dodson.

“Yeah, I have a five-fight win streak, but I’m going step by step,” Dvalishvili said, adding that his own losses have contributed to his capacity to tune in his focus to the fight directly in front of him.

"I have a five-fight win streak, but I’m going step by step."@MerabDvalishvil is ready for his #UFCVegas25 showdown with Cody Stamann 🔊⬆️ pic.twitter.com/fJNAEDbNTb

Dvalishvili’s 54 takedowns in just seven UFC fights sets the bantamweight record, propelling him toward the all-time takedown record of 90, set by Georges St-Pierre across nearly 30 fights. And although his high-IQ chain wrestling abilities are always on display, the judo black belt said he’s simply taking advantage of the opportunities he sees in his fights.

“I’m never focused on wrestling; I’m just doing what I have to do. It’s easy for me to take people down and control,” Dvalishvili said.

While win streaks and shattering UFC records unquestionably adds momentum to the already-hurtling force in the bantamweight division that is Dvalishvili, his biggest source of confidence stems from his training partners -- namely the newly crowned champion, Aljamain Sterling.

Describing his home at Team Serra/Longo as “a family,” Dvalishvili is just one of the handful of the Long Island-based fighters who have spent their training camps mainly in Las Vegas. 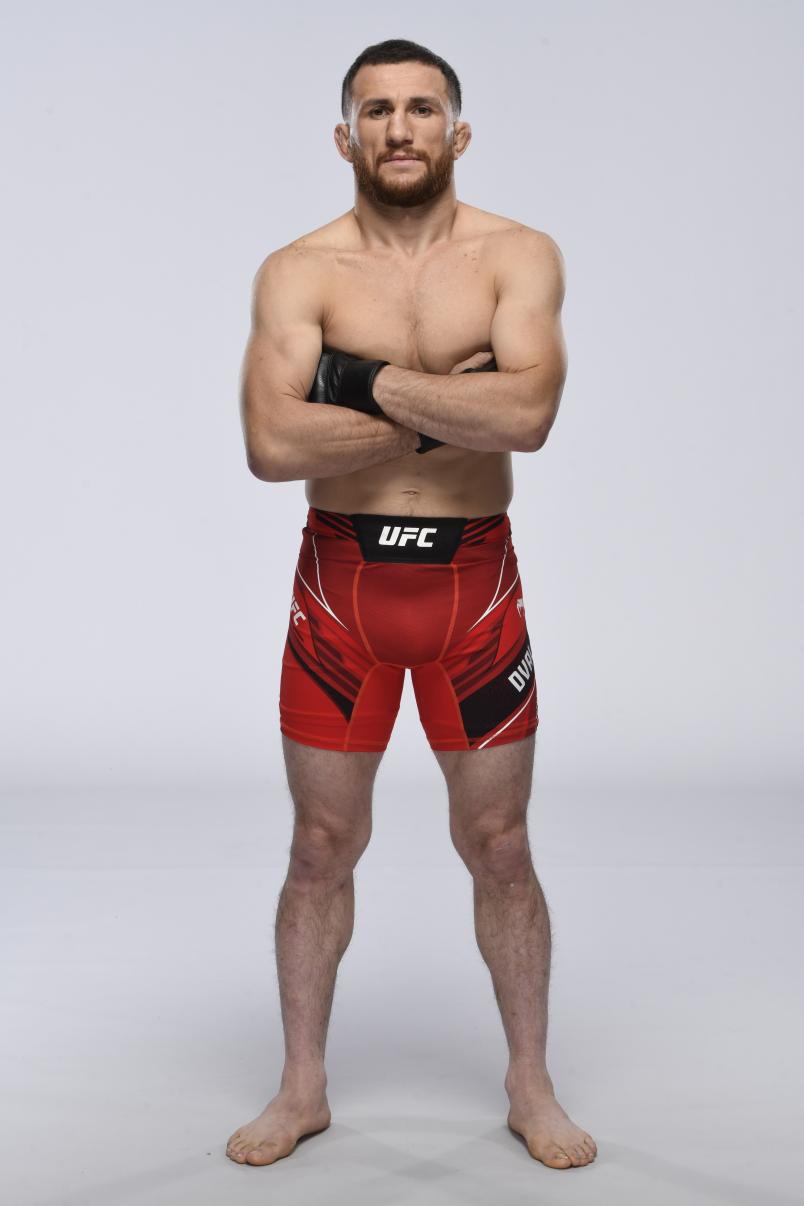 Merab Dvalishvili poses for a portrait during a UFC photo session on April 28, 2021 in Las Vegas, Nevada. (Photo by Mike Roach/Zuffa LLC)

While Dvalishvili won’t find any frozen ponds in Nevada to hone his toughness, there are plenty of other opportunities for him to achieve next-level training alongside the man that sits atop his weight class.

“I believe in my cardio and conditioning because I’m training with the champion and many other good fighters,” Dvalishvili said. “I have the confidence that I can fight 15 or 25 minutes. I’m ready, and I’m gonna leave everything in the Octagon this Saturday.”

A veteran of going the 15-minute distance, the 30-year-old said he’s anticipating an active, high volume “15-minute war” with Stamann.

And while a clash of similar styles inside the Octagon usually alludes to a predictable fight, Dvalishvili feels it will be anything but predictable.

“He’s a wrestler, I have a wrestling style, but I’m a judo black belt. So maybe he’s better at wrestling, but this is MMA,” Dvalishvili said with a smirk spreading across his face. “This is a fight. One punch can change everything. I can strike, like I showed in my last fight with Dodson. I took him down only two times and he got up, so I was striking with him. It’s not a problem for me. If he thinks he’s going to wrestle me, I think it’s going to be a mistake because I’m going to throw punches.”