Seery walking away while he's still at top of his game

Working Class Hero is something to be! Thanks for always bringing it @NeilSeeryMMA! pic.twitter.com/ors5A0b6Z8
— UFC Europe (@UFCEurope) July 11, 2017

When Neil Seery fights for the final time this Sunday against Alexandre Pantoja, he will leave the sport of mixed martial arts while he still has something left to give.

“To be honest, I think it’s the best way to leave, instead of when people start saying you should have probably gone two or three fights ago,” Seery said. “I would be in the gym and say to myself, my training partners and everybody that would listen that as soon as the lads start to take over and I can’t compete with them anymore, I’m gonna start walking away. And it hasn’t happened yet. I’m still competing with the same lads, I’m still there in strength and conditioning, and I’d rather leave on top than leave where people really want you to retire.”

At 37, Seery doesn’t have the mileage on him that most fighters that age do, a testament to starting late in the sport and having a full-time job that left him precious little time to get out of shape or into trouble. And while he’s currently 3-3 in the UFC since making his debut in 2014, he’s never been stopped in the Octagon, and he’s been in every fight he’s lost in the promotion. His last win also saw him earn Performance of the Night honors for a submission of Jon Delos Reyes in his hometown in 2015, yet after his May 2016 loss to Kyoji Horiguchi, he began to feel that the time for him to go was here.

“I think I’ve just put my body through too much over the last 14 years or so,” he said. “I started late in MMA, and I’ve been a late finisher. (Laughs) The mind is still as sharp as it was when I started, but the body starts slowing down. I wanted to finish my career at the top level, which is the UFC. There are not many fighters in the world that get to finish there. I didn’t want to go to any other organization if I got cut, so I’d rather finish on top.”

He had his chance to walk away close to home when he was matched up with Ian McCall for a bout in Belfast last November, but McCall fell ill on weigh-in day and the bout was scrapped. It was rescheduled for UFC 208 in Brooklyn earlier this year, but this time, Seery was forced to withdraw when his mother-in-law passed away. It was as if the MMA Gods were telling “2Tap” that it wasn’t his time to leave yet, but in reality, Seery saw it as a sign that he was going to have the Horiguchi bout as his final statement in the Octagon.

“November in Belfast, it was so, so close to that fight and then it was taken from me and I couldn’t believe it,” he said. “It was heartbreaking. I really put a lot into that camp, and I had to be on top of my game to compete with Ian McCall, never mind beating him. And I was really up there, really looking forward to the fight and then it was taken from me. And then I was scheduled in February and it wasn’t the same. I’d be lying to myself if I said I was feeling the same. It was very hard to motivate myself again for that fight. And we lost my mother-in-law, and there was not a chance I was going to leave my wife and travel.” 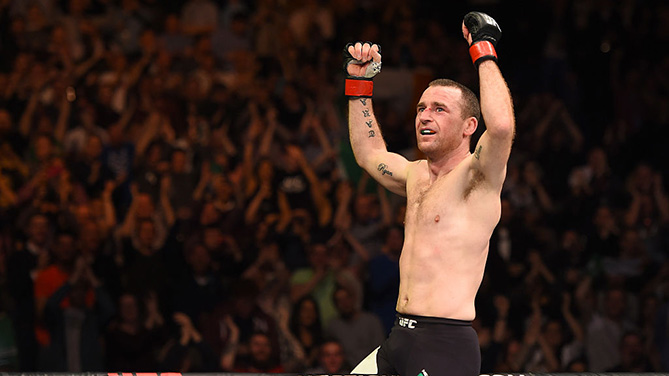 Heading into this Sunday’s matchup with Pantoja, though, Seery feels so good and so ready that he’s almost regretting his decision to retire.

“I’m feeling really good at the minute,” he said. “I’m actually disappointed that I made my decision to walk away. I’m really gonna miss the buzz around fighting, but every man’s time comes, every fighter’s time comes, and I think it’s the right time now to bow out.”

It’s not as if Seery will have nothing to do after the final horn sounds on his career. He’s always been a working man, and he and his wife are expecting their fifth child, but he does admit that he’s thought about the next chapter not having fighting in it.

And he will. Yet if those times do come when he misses the game, he can fondly look back at a career well fought. Seery was always an honest fighter who showed up with his gloves and mouthpiece and got down to business. That business wasn’t always a lucrative one, especially in his early days.

“I started my career fighting in pubs, and that’s not outside pubs, that’s people putting up boxing rings in a pub and there are 50 people there and I’m fighting at 75 kilos (165 pounds),” he laughs. “Now, I’m at the biggest stage in the world and I’m walking away. I’ve made some fantastic friends and met some unbelievable people.”

He was also a member of the Irish Invasion that hit its peak in 2014 when Seery, Conor McGregor, Paddy Holohan, Cathal Pendred and Norman Parke were all victorious at the O2 in Dublin. Of that group, only Seery and McGregor remain on the roster, and though he calls his 2015 win over the then-unbeaten Chris Beal as one of his lasting memories, Seery still has one more chance to thrill the fans again, and he’s going to make the most of it.

“It’s the perfect way to go,” he said. “For people to ring you up and say you’ve got a lot to offer in the Octagon, you’ve still got a lot of energy left in you, I love hearing stuff like that. I’m walking ahead with my head held high whether I win, lose or draw on Sunday.”