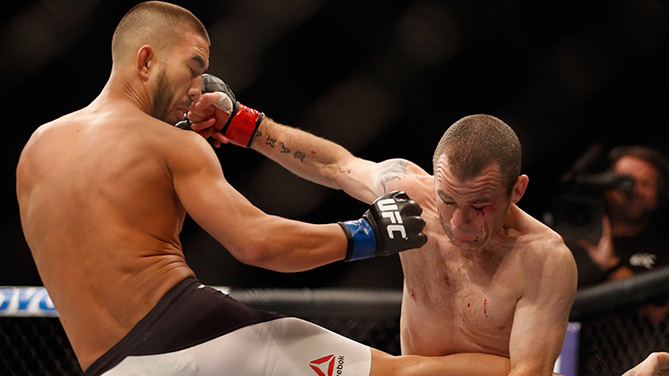 Technical boxing and grit have become hallmarks of Neil ‘2 Tap’ Seery’s UFC performances. To add to that, he just appears to love fighting more than most people in the game.

Never taking a backward step in the Octagon, you’ll often see the 36-year-old flash a brief smile at his opponents during the most heated of exchanges, before he’ll load up again and fire off another furious flurry. He relishes any opportunity he gets to trade leather on the world’s biggest stage, but there is cause for my excitement than ever based on his next opponent, who he will meet on May 8 in Rotterdam.

Currently ranked No. 6 at flyweight, Kyoji Horiguchi is the biggest test of Seery’s career. There are no obvious indicators to it in his style, but the elder statesman of Dublin’s Team Ryano might be more prepared for the leaping attacks of the black belt karateka than you would have expected.

“It’s an awkward stance, it’s a quick-moving stance and it’s a rangy stance,” Seery outlined. “He gets in and out well and that’s a big characteristic of the karate style.

“I trained karate for years and I earned my brown belt. It’s punch-in, punch-out and he can punch off the back foot. That’s a tough thing to master, but he’s done it. He’s not there when you’re throwing punches, so it’s hard to fight this lad. He leaps in with speed, precision and power.

“Listening to me, you’d think I have f**k all going for me, but I look at it and say, ‘It’s 15 minutes’. You could turn up for 15 minutes one day and be the best fighter in the UFC and you could turn up the next day and people would say that you shouldn’t be in there. That’s just the way it goes. I know that if everything is not on point on May 8, I’m going to lose. Same way as if he doesn’t turn up, he’s going to lose the fight. That’s what makes it exciting for me.”

The power in Seery’s hands has brought pause to some of the flyweight division’s heaviest hitters. The Irishman’s boxing forced Brad ‘One Punch’ Pickett to look for a takedown when he met the Londoner in his hometown for his short-notice UFC debut in March 2014. In every single fight he has had since then, every one of his opponents has looked to do the same.

“I think he will dive in for a takedown,” said Seery of Horiguchi. “When these flyweights hit me and I’m still standing there, they start to wonder if they hit me at all. Before they know what’s happened I’m walking them down and I waiting for the exchange again.”

The Dubliner knows that he has the power to end the contest, but he is aware that there is no guarantee of a solid connection against Horiguchi. In fact, Seery believes the Japanese fighter is one of the most elusive fighters in the 125 lbs bracket.

“It’s going to be hard to out strike him. Chico Camus fought him and he has really good hands and really good wrestling. Camus had some success in his fight with Horiguchi, but I don’t know if he’s a heavy puncher.

“I guarantee that I’m the hardest hitter at flyweight. There aren’t many people who throw as hard as I do, and that’s not me blowing smoke up your arse. I hit like a motherf****r. Nine out of 10 people are going down if I hit them. That’s why people shoot on me, and that’s when I know I’ve hurt them.

“Catching Horiguchi is going to be the problem. He’s probably the most elusive in the division. Do I hunt him down? Do I walk forward? Do I cut the ring off? I have to be on point to beat him. He’s so quick and elusive.