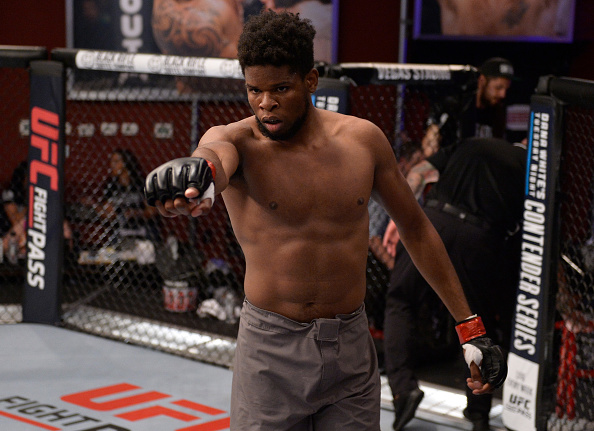 Kennedy Nzechukwu celebrates after his TKO victory over Dennis Bryant in their light heavyweight fight during Dana White's Tuesday Night Contender Series at the TUF Gym on August 7, 2018 in Las Vegas, Nevada. (Photo by Chris Unger/DWTNCS LLC)" align="center" />
It would have been easy for Kennedy Nzechukwu to be bitter after he defeated Anton Berzin on season one of Dana White’s Tuesday Night Contender Series but left Las Vegas without a UFC contract.

Sure, the Nigeria-born Texan was only 3-0 as a pro after the victory, but you know how things go when you’re young and hungry and ready to take on the world. But Nzechukwu is unlike most fighters. So he took the time after the Berzin fight not to sulk, but to get better

“I just kept training more and I fixed all the bad habits I had,” he said. “I got more fights, got more confidence, and just kept working to become perfect. I worked on all my tools and techniques.”

Two knockout wins would follow. Then there was a call for the second season of DWTNCS, and after stopping Dennis Bryant in less than two minutes, Mr. Nzechukwu was a UFC fighter. It’s been a familiar story for those who made good on their second appearance on the series, but just like Nzechukwu isn’t like most fighters, his story is unlike that of his peers as well.

For instance, realize that Nzechukwu hasn’t been training a decade or more for his moment. Instead, after coming to the United States nearly nine years ago, he ended up watching the UFC around 2013-2014. Then he decided he wanted to be a fighter.

“It’s the training, but most of all, it’s because I’m a fast learner,” Nzechukwu said of his rapid rise. “I learn quickly, it doesn’t really matter what I do. And if I’m enjoying it, I can pick it up faster than most people. And then with the repetitions and the rounds and the environment, all that contributes as learning factors in everything I do. I just keep on believing and working hard. That’s all it took.”

He makes it sound easy, but it wasn’t, especially since his life isn’t consumed by the things most 26-year-old pro athletes are surrounded by. Nzechukwu’s mother Adaku was stricken by Lou Gehrig’s disease (ALS) in 2014, and Kennedy fights to take care of her and his older brother, who has autism.

“She’s doing well,” he said when asked about his mom. “I’m with her right now. She’s happy that I’m back from Vegas and I won.”

That’s a heavy cross to bear, but Nzechukwu bears it without complaint.

“God is who guides me,” he said. “I know some people might not be that religious, but I believe in God and I believe he gives me the strength to do everything I’m doing right now. All the victories and all the accomplishments are all because of him. He gives me the willpower. Besides that, I don’t know what I would do.”

If you’re feeling guilty that you complained about your latte being too sweet this morning, that’s an appropriate response. I ask Nzechukwu if he ever gets time for himself, to be a “normal” 26-year-old. He pauses to think about it, which in itself speaks volumes.

“Yeah, I hang out with my training partners sometimes and I go to Bible study and help people around,” he said. “Right now, having time for myself is not really that big of a deal because I can see accomplishing all my goals and that means much more to me.”

“That’s pretty much all I can say for that.”

It’s really all that needs to be said. And suddenly, this story isn’t about prizefighting anymore, but about so much more. That’s why when he talks about getting the UFC light heavyweight title, it isn’t about him then having the ability to then buy houses and cars and walk red carpets. Not even close.

“I can see that moment,” Nzechukwu said. “I can see getting that belt wrapped around my waist. This is much more than a sport to me. This is about me using this as a platform to help other people, to open a charity, help kids in poor neighborhoods that don’t have anyone to help or look up to. I need this. I need this to create a platform because there are so many kids suffering and there are so many people focused on the wrong things. If there’s one thing I know I was born to do, it’s to help and create a better world. I want to create a movement. I want to be a different, unique human being, and when people look back after my task is done on Earth and I’m six feet under, I want people to remember me and say, ‘That was a good dude. He helped so many people.’ I don’t want to be famous; I want to be famous knowing that I did something, that I helped people accomplish their goals and dreams.”

Nzechukwu doesn’t need a belt for that. He’s already a different, unique human being. And a good dude.