For the second time in nine months, James Vick is readying to step into the Octagon and trade hands with Paul Felder, only this time, there won’t be a change of plans.

Initially paired off with “The Irish Dragon” last spring, Vick was pulled from the matchup just a few weeks before the fight and put into a main event bout against Justin Gaethje the following month in Lincoln, Nebraska.

It was a tremendous opportunity for the ambitious lightweight from Texas, but a late kick to the ribs for Felder, who had missed out on an opportunity to compete earlier in the year under similar circumstances.

“I do understand his frustrations with being put on the back burner with a couple of those fights,” said Vick, empathizing with the man he’ll face on Sunday night in Phoenix, Arizona whose fight with Al Iaquinta at UFC 223 in April disintegrated at the 11th hour when the New York native was tabbed to face Khabib Nurmagomedov in the main event. “At the end of the day, that’s how it goes with the rankings. That’s why we got the opportunities — because we were ranked higher, but it sucks for him. I would be frustrated too.”

Having amassed a 9-1 record in his first 10 appearances following a stint on Season 15 of The Ultimate Fighter, Vick jumped at the chance to headline the UFC’s debut show in Lincoln and share the cage with Gaethje.

He viewed the matchup as a make-or-break opportunity — the first of many main event appearances or the first and only time he would headline a fight card — and liked his chances against the former World Series of Fighting lightweight champion, who had been finished in back-to-back fights and engaged in all-out brawls in each of his first three appearances under the UFC banner.

He got into a war of words with Gaethje, calling him shopworn, forecasting a finish and a move into the upper echelon of the loaded lightweight division.

He got knocked out in less than 90 seconds.

“I f****** blew it,” said Vick, reflecting on his August entanglement with Gaethje. “I can’t blame anyone or anything. It took me twice as long as most people to get an opportunity like that and when I got it, I f****** dropped the ball and I blew it.”

A big part of the reason the 31-year-old lightweight had put so much emphasis on the fight with Gaethje is that despite building up a solid resume, he felt like opportunities to face top-flight competition weren’t coming his way, as higher ranked competitors sought bigger names and bigger paydays while looking to protect their place in the divisional hierarchy.

Beating Gaethje was his gateway to the fights he wanted, the opportunities he felt he had earned, especially during the four-fight winning streak that preceded his meeting with the Trevor Wittman-trained knockout artist in August.

The way he saw it, his entire career hinged on the outcome. As he readies to step into the cage again, the loss still eats at him and his efforts to ascend the lightweight rankings have to begin anew. 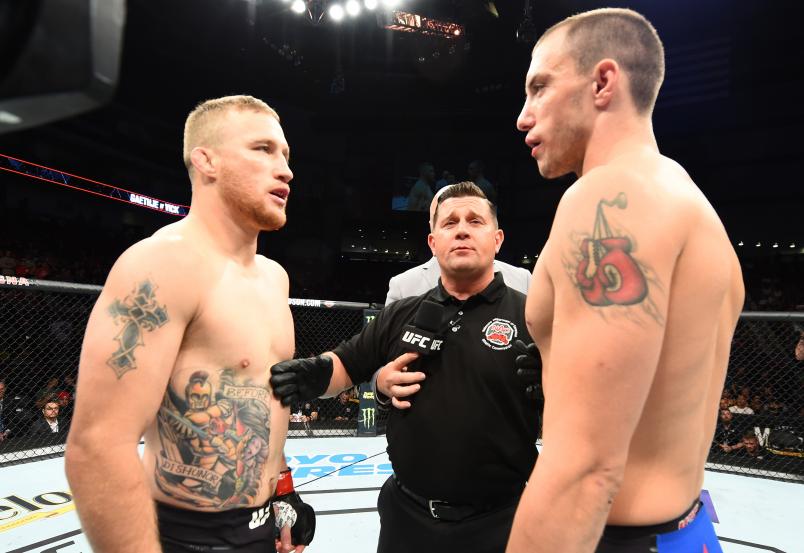 LINCOLN, NE - AUGUST 25: (L-R) Opponents Justin Gaethje and James Vick face off prior to their lightweight fight during the UFC Fight Night event at Pinnacle Bank Arena on August 25, 2018 in Lincoln, Nebraska. (Photo by Josh Hedges/Zuffa LLC/Zuffa LLC via

“It still sucks, for sure,” said Vick, who holds victories over Jake Matthews, Joseph Duffy and Francisco Trinaldo. “It hasn’t been the end of the world, but it was a major, major setback, especially with how our division is right now.

“I’m looking at beating Paul Felder and still having to fight someone ranked below me again, maybe a couple people. Maybe after I win this fight, maybe I have to fight two people ranked below me before I get an opportunity.

“My goal is still to be a world champion and I still feel that with two or three fights, I’m going to be in line for a title shot,” he added. “Where I’m ranked, it only takes one or two fights to get you up drastically, but it’s hard now because all these guys don’t want to fight. The only thing I can do is keep fighting and be active.”

It’s an unenviable position that Vick finds himself in — entrenched in the Top 15, but struggling to secure the kind of matchup he needs to climb the rankings. Losing to Gaethje knocked him down a couple rungs on the divisional ladder and forced him back into being the higher ranked half of every pairing, where victories don’t move the needle all that much and losses are potentially devastating.

It’s also why when the UFC called to set him back up against Felder, the rangy lightweight said yes without hesitation.

Despite being unranked and coming off a loss to Mike Perry in an impromptu welterweight bout that came together in the wake of his initial pairing with Vick being scrapped, Felder is a high profile opponent and a proven tough out.

Prior to losing to Perry in a back-and-forth slobberknocker, the UFC analyst had earned three straight stoppage victories, including a second-round TKO win over Charles Oliveira, who has rattled off four submission wins in the 14 months since that fight to climb into the Top 15.

With Felder’s penchant for being involved in entertaining fights and the cache that comes with being an on-air talent for the organization, a victory by Vick in Sunday’s co-main event pairing could be just what the Texan needs to set himself up for bigger and better as 2019 progresses.

“I think we just have to have an exciting fight and I don’t think that’s going to be a problem,” Vick said when asked what he needs to do this weekend in order to return to the main event picture next time out. “The way his style is and the way my style is, I think we’re going to come out here and it’s going to be a good fight. The reason they put us as the co-main event is they know there is the potential for Fight of the Night and we will come to fight.

“I think it’s going to be a standup fight and I think I’m going to win,” he predicted. “My skill set is better, my movement is better. He’s hard to finish, but Joe Duffy had never been knocked out before I fought him also. I’m not going to say I’m going to finish him, but I will look for the finish for sure because I feel like I can win a decision against Paul Felder all night long.”