The Latest Round Of UFC Hopefuls Go For The Glory Tuesday Night In Las Vegas.
By Thomas Gerbasi, on Twitter @TGerbasi • Aug. 16, 2022

Through the first three weeks of Season 6, 10 competitors have been invited to join the UFC ranks, while middleweight super-prospect Bo Nickal was handed a developmental deal and an invite to compete inside the UFC APEX for a second time later this season.

This week, five more sets of hopefuls hit the cage hoping to add their names to the collection of athletes matriculating to the biggest stage in the sport. After another night of explosive action, it was another “Everybody Gets a Contract” evening, as UFC President Dana White invited all five victors to compete in the UFC.

Esteban Ribovics defeats Thomas Paull by KO (punches) at 1:30 of Round 1 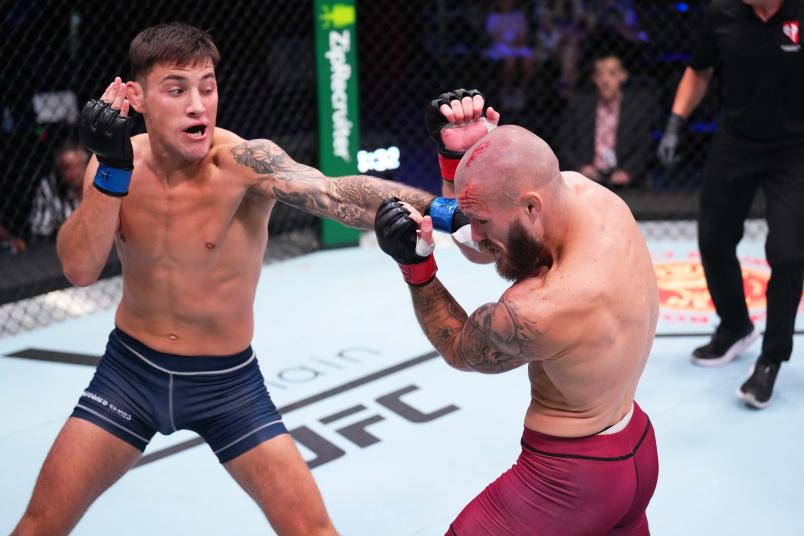 Both men came out slinging hands to start the fight and never really left off the gas. As Paull marched forward, looking to pin Ribovics against the fence, the Argentine unloaded a short right hook inside that landed flush and brought the bout to an instant halt. 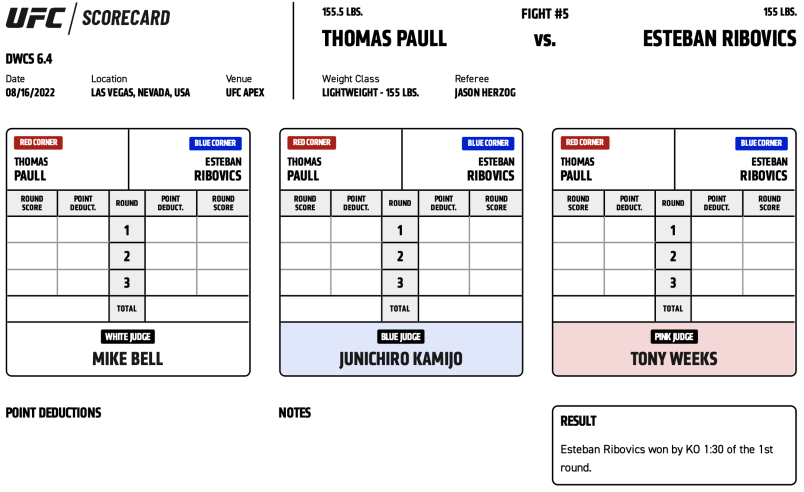 Just a tremendous finishing blow and impressive way to close out an action-packed night of fights inside the UFC APEX.

Claudio Ribeiro defeats Ivan Rodriguez by KO (left hook) at 0:25 of Round 1

Claudio Ribeiro put Ivan Valenzuela down with one shot, sending him crashing to the canvas with a thunderous left hook just seconds into the fight. 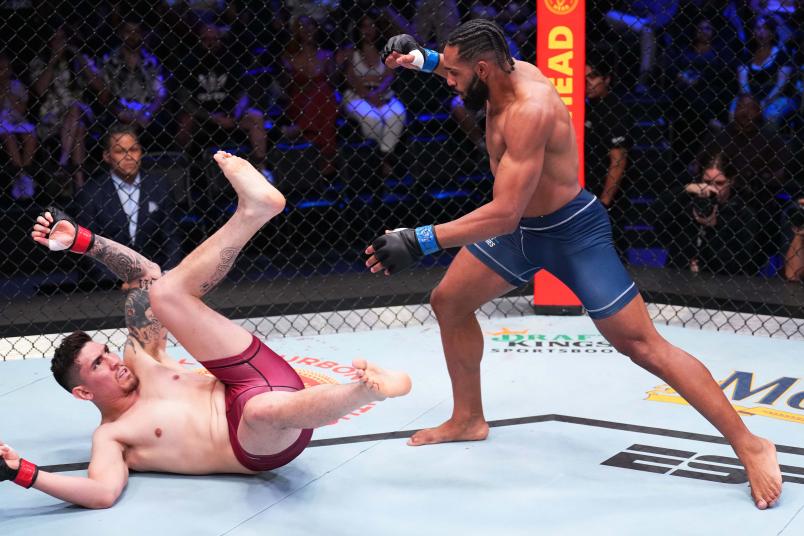 Ribeiro spun Valenzuela around with a low kick, and when “Bam Bam” tried to land a spinning backfist as he rotated through, BAM! 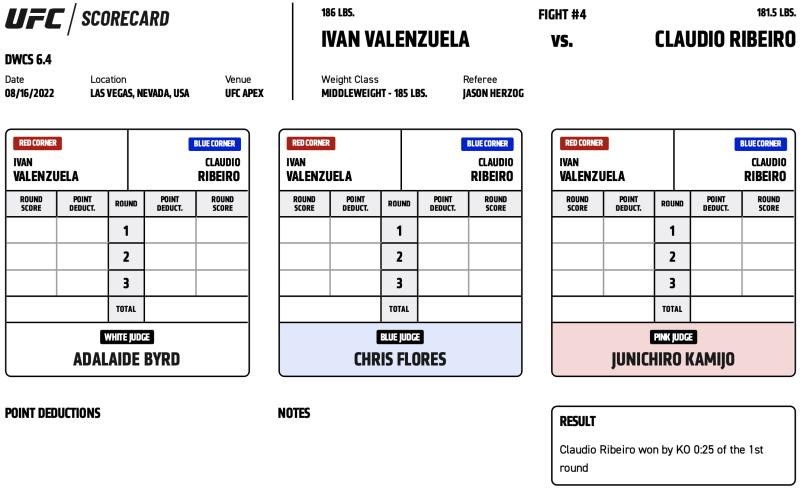 The fourth fastest finish in the history of Dana White’s Contender Series pushes Ribeiro’s record to 10-2, and will likely earn the Brazilian a call to the UFC. 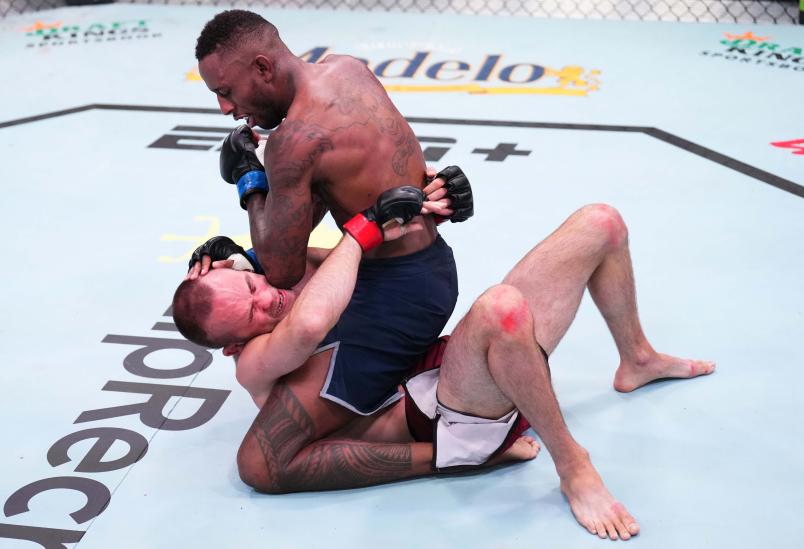 Cartwright won the pure grappling exchanges, doing a good job of getting inside and putting Johnson on the deck, but got a little too aggressive in his pursuit of submissions at times, leading to his losing position. Conversely, Johnson did well to do damage whenever he could, attacking with body shots and elbows in fits and starts, finishing the first and third rounds in mount. 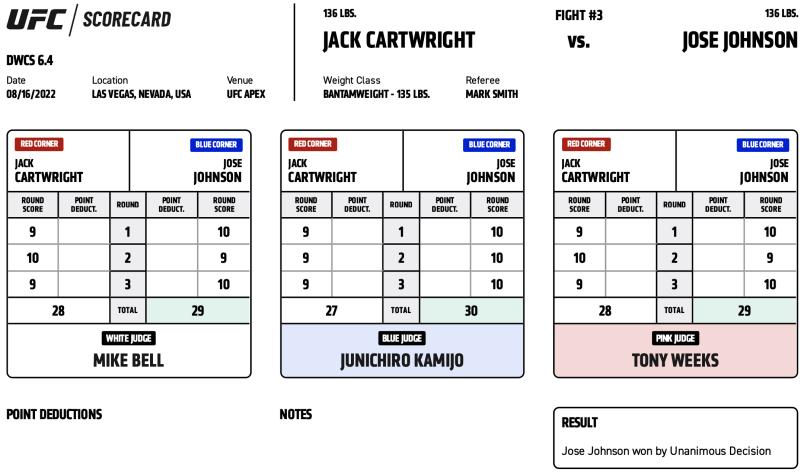 Each man showed grit and tenacity battling through some tough moments and tricky spots, but in the end, it was Johnson’s overall activity and the impact of his blows that earned him the nod.

There was more blood spilled in the second fight, as well, as Hailey Cowan cut Claudia Leite with a short, sharp elbow when the duo was pressed up against the fence early in the opening round. The Brazilian hung tough, dealing with the blood and Cowan’s control for the remainder of the round before coming out aggressively to start the second. 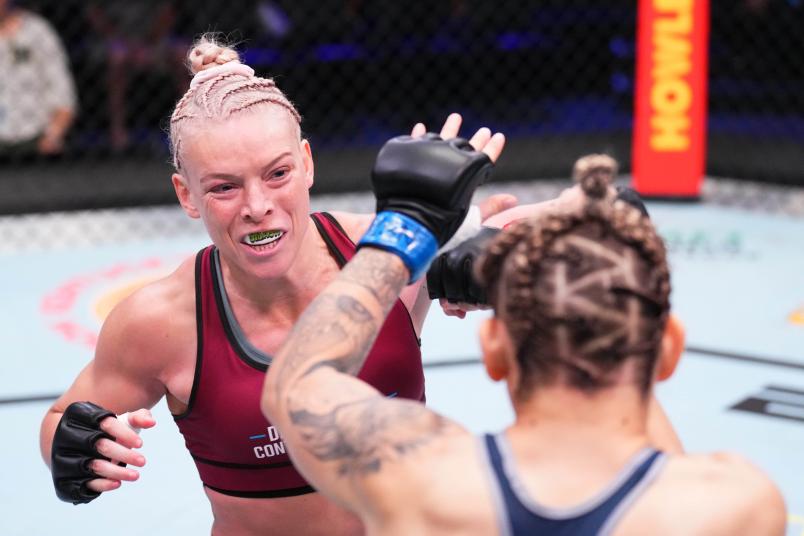 Early in the round, Leite showed her grappling prowess, winning a scramble to put Cowan on her back before controlling the frame, threatening with an arm triangle choke and staying one step ahead of her American counterpart on the canvas.

Clinched up early in the third, Cowan tossed Leite to the canvas, bashing away with short punches and elbows for the first three minutes of the frame before getting a little too aggressive and getting reversed. Cowan was largely able to neutralize Leite from the bottom, with the Brazilian spending too much time working to control position rather than attacking and doing damage. 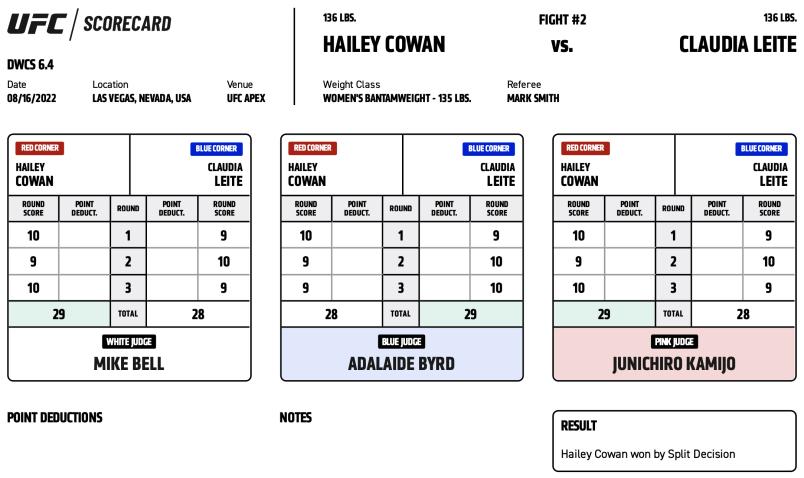 When the scores were totalled, Cowan came out on the happy side of the split decision verdict, earning her second straight victory and moving to 7-2 overall, while Leite falls to 7-3 with the loss.

Nazim Sadykhov defeats Ahmad Hassanzada by KO (right hand) at 1:59 of Round 3

Nazim Sadykhov wasted no time getting this week’s action under way, hurting Ahmad Hassanzada with the first kick he threw and landed just three seconds into the bout. From there, he put Hassanzada on the deck, cutting him with elbows before controlling things for the remainder of the round. 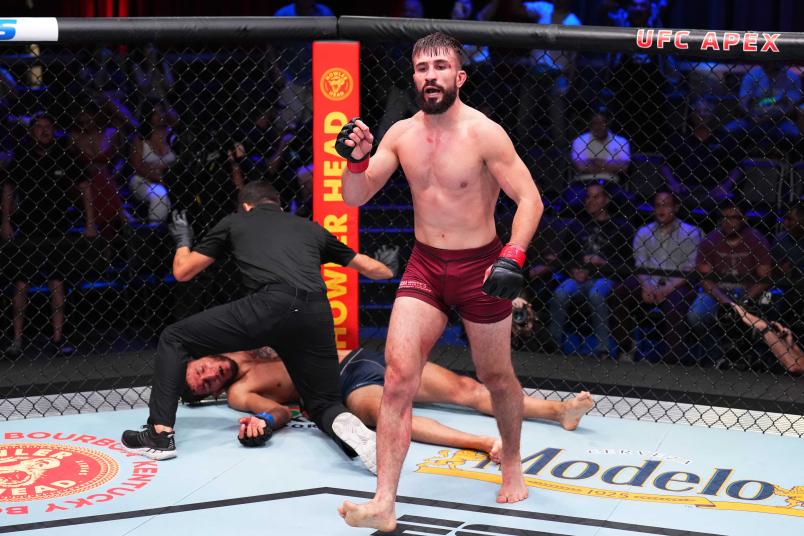 Hassanzada showed grit in surviving through to the end of the round, and tried to work his way back into the fight in the second, turning to his wrestling, only to be stuffed and stung with short elbows and punches to the side of the head by Sadykhov. Late in the frame, the Team Serra-Longo representative hurt Hassanzada with another body shot, and he came out in the third looking to chase down a finish.

Two minutes into the round, Sadykhov dug in with a right hand to the body, following it with an overhand right that landed flush and sent Hassanzada to the canvas. 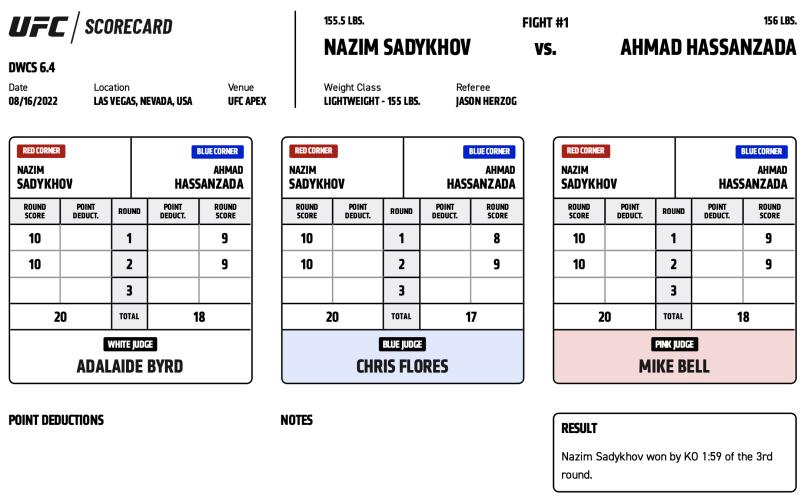 Just a huge finish and strong overall showing from the 28-year-old, who moves to 7-1 with the victory.