Get Ready For Another Week Of Dana White's Contender Series!
By E. SPENCER KYTE, ON TWITTER @SPENCERKYTE • Oct. 11, 2021

Mike Malott, Carlos Hernandez, Fernie Garcia, and Genaro Valdez all secured wins and opportunities to compete in the Octagon going forward, while middleweight Joseph Holmes will compete in front of the UFC President and the Lookin’ for a Fight crew on next month’s Fury FC card in Denver alongside another recent Contender Series winner, Mo Miller.

Watch Tuesday With Your ESPN+ Subscription

This week, another collection of competitors are eager to make an impression on the UFC President, including a pair of highly regarded, unbeaten talents from the United Kingdom.

Bantamweights headline for the first time this season as Reyes Cortez and Christian Rodriguez face off in the final bout of Week 7.

Sporting a 5-1 record and representing the Fight Ready crew, “Jr” Cortez arrives in Las Vegas looking to secure his third consecutive victory and second win of 2021. The 29-year-old hopeful looks to follow in the footsteps of his sister, flyweight rising star Tracy Cortez, who claimed her place on the UFC roster with a unanimous decision win on the third season of Dana White’s Contender Series and has since gone 3-0 inside the Octagon.

RELATED: Look Back At All DWCS Season 5 Results

Unbeaten in five professional bouts and riding a seven-fight winning streak dating back to his days as an amateur, the 23-year-old Rodriguez aims to take the next step forward in his career with a win on Tuesday. A product of Milwaukee’s Roufusport Academy, Rodriguez has collected stoppages in all five of his professional appearances, maintaining his finishing ways even as he’s graduated to facing tougher competition.

Both men come from quality camps that have produced winners on the Contender Series in the past, so it will all come down to who is more prepared and who is the better man on Tuesday evening. Will we see our first brother-sister combo to earn UFC contracts, or will Rodriguez join the long list of Roufusport fighters to matriculate to the biggest stage in the sport?

It’s a clash of titans in the heavyweight division as Lorenzo Hood and Martin Buday collide in the penultimate pairing of the week.

Initially slated to face Lukasz Brzeski on the opening episode of the season, Hood was forced to withdraw, but returns here, angling to build on his three-fight winning streak and punch his ticket to the UFC. A massive human being who returned from nearly three years on the sidelines in January with a 91-second stoppage win, Hood is no fan of the scorecards and will be out to continue avoiding them on Tuesday when he steps in against Buday.

Slovakia’s Buday brings an 8-1 record into his bout with Hood, having won seven consecutive contests since losing the second bout of his career to Ultimate Fighter winner and current UFC heavyweight Juan Espino. The six-foot-five “Badys” shares Hood’s penchant for avoiding the scorecards and has only ventured beyond the opening round three times during his current winning streak.

Anything can happen whenever talented fighters share the cage, but it’s safe to say that there is a high probability that this one is going to end inside the distance with someone celebrating, and someone else looking up at the lights wondering what just happened. 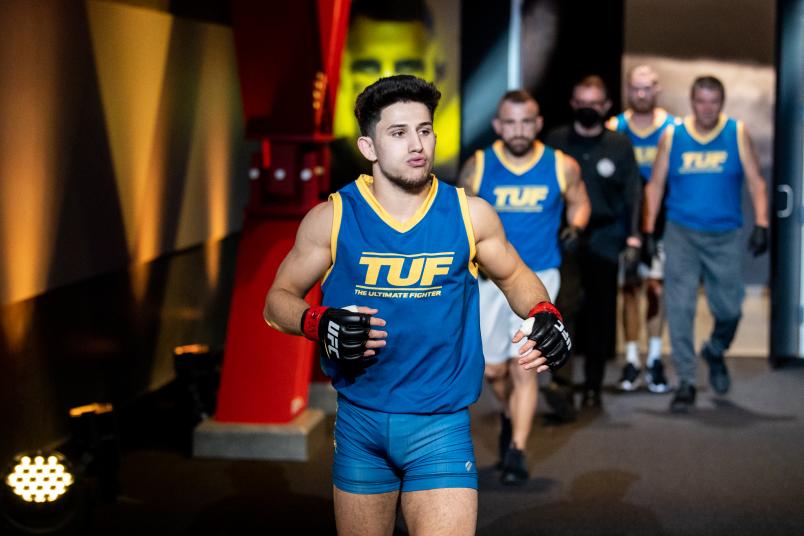 Bantamweight Mitch Raposo of Team Volkanovski prepares to enter the Octagon for his fight against Luidvik Sholinian on The Return Of The Ultimate Fighter. (Photo by Chris Unger/Zuffa LLC)

Unbeaten flyweights clash in the middle of Tuesday’s card in what is one of the best fights so far this season on paper as Cage Warriors champ Jake Hadley squares off with TUF 29 alum Mitch Raposo.

A perfect 7-0 in his pro career, Hadley is one of the top prospects coming out of the United Kingdom, having claimed the Cage Warriors flyweight strap with a unanimous decision win over Luke Shanks at the end of last year. The 25-year-old “White Kong” was originally paired off with Kleydson Rodrigues on September 21 but couldn’t make the date due to visa issues. Rodrigues remained on the card and earned himself a contract, and now Hadley will look to do the same here.

The 22-year-old Raposo was the first pick of Team Volkanovski on Season 29 of The Ultimate Fighter, but unfortunately for the Fall River, Massachusetts native, he was bounced from the competition in the opening round, losing to Team Ortega’s Liudvik Sholinian. A grinder representing the Regiment Fight Team, Raposo is 5-0 in his pro career and could instantly establish himself as someone to watch if he’s able to halt Hadley’s run of success and secure himself a UFC contract here.

These are two terrific young fighters, both of whom have bright futures in the sport, so pitting them against one another on Tuesday could very well produce one of the best fights or the biggest statement win of the season so far.

After wrapping his extensive amateur career with seven consecutive victories, Duncan has maintained that success since turning pro, posting seven finishes in as many starts heading to Tuesday’s showcase opportunity in Las Vegas. “The Problem,” who has trained with UFC light heavyweight Paul Craig and former UFC competitor Robert Whiteford in the past, earned second-round stoppages in each of his two 2020 appearances, and looks to maintain that form as he makes his 2021 debut on Tuesday.

Only 28 months into his professional mixed martial arts career, Borshchev has rebounded from his first career loss last December with a pair of victories already in 2021, registering consecutive stoppages under the Titan FC banner in March and July. A former kickboxer, the 29-year-old Borshchev has been training with the crew in Sacramento for a number of years and should be a stern test for the unbeaten Duncan on Tuesday evening.

Will the Scottish standout continue rolling or will Borshchev hand him his first defeat and become the latest member of Team Alpha Male to graduate to the UFC?

The Week 7 action begins in the flyweight division as Brazilian Maria Silva squares off with American Kathryn Paprocki in what should be an electric affair to start the night.

Undefeated in six professional appearances, the 25-year-old Silva fights for the first time since the end of 2019 on Tuesday. She has faced limited competition to date, but handled her business each time out, which is all you can ask of a hopeful as they work their way up the ranks, chasing their dreams.

Fighting out of Colorado, Paprocki gets the short notice call to replace Silvana Juarez, who stepped up to face Loopy Godinez on Saturday. The 28-year-old earned a third-round submission win in her most recent outing under the LFA banner, and has competed across a variety of disciplines, including earning a boxing win over Cassie Robb and a victory in a Muay Thai bout over Celine Haga, both of which came in the same night.

Who will walk away disappointed and who will have their hand raised in victory once again? Tune in on Tuesday night to find out.