It's Week 2 Of The Best Tuesday Night In All Sports. Let's Break Down The Second Episode of Dana White's Contender Series.
By E. Spencer Kyte, on Twitter @SpencerKyte • Sep. 6, 2021

One week into the new season of Dana White’s Contender Series and waves are already being made, as last week’s season five premiere featured a new first and a knockout that is going to be hard to top as the best of the 10-card collection.

After going 39 events with only victorious fighters earning contracts, UFC President Dana White brought a fighter that landed on the wrong side of the results into the fold for the first time last Tuesday, awarding Carlos Candelario a contract despite the returning Contender Series contestant suffering a split decision loss to Victor Altamirano.

In addition to bringing the dueling flyweights, three others joined the UFC roster last week, with Russian light heavyweight Azamat Murzakanov, Brazilian featherweight Joanderson Brito, and American welterweight AJ Fletcher each being awarded contracts. Of the five new arrivals, Fletcher stood out the most, scoring a first-round knockout win over Leonardo Damiani by placing a picture-perfect flying knee on the Italian’s chin midway through the opening bout of the season.

Last week set the bar pretty high on all fronts, but you know this week’s crop of hopefuls will do their best to reach those same levels and potentially exceed them.

Here’s a look at the Week 2 matchups.

Welterweight prospects close out the show this week as Logan Urban steps up on short notice to take on Josh Quinlan in Tuesday’s finale.

Fighting out of Revolution Fighting and Fitness in Euclid, Ohio, Urban posted a 6-0 mark with six finishes as an amateur and has been a force since dropping his second pro fight. The 27-year-old “Hulk” arrives in Las Vegas on a four-fight winning streak, having earned all those victories inside the distance.

Watch Episode Two Tuesday On ESPN+ | Outside The US? Watch On UFC FIGHT PASS

Quinlan also logged a number of amateur bouts before turning pro, posting a 6-0 record with five finishes, including a 19-second knockout of TUF 29 contestant Ryder Newman. He made his professional debut in April 2019 with a first-round stoppage win and has been rolling ever since, earning four more finishes heading into this one, including three straight under the LFA banner.

This is a quality matchup between a pair of promising welterweights looking to take the next step forward in their respective careers, and it should be an entertaining way to end things Tuesday night inside the UFC APEX.

Young Brazilian Mario Sousa returns to Las Vegas hoping to build on his decision win from last season as competes on the Contender Series for the second time, facing off with talented veteran Chidi Njokuani in an intriguing middleweight matchup.

Sousa collected a unanimous decision win over Mariusz Ksiazkiewicz last November at the UFC APEX, pushing his winning streak to five and his record to 12-1 in the process. Returning for the first time shine that contest after having a fight in April cancelled, the 24-year-old looks to build on his initial impression by taking out the most experienced fighter he’s faced to date.

A pro for well over a decade, Njokuani arrives on the Contender Series with a 19-7 record that includes wins over Alan Jouban, Gilbert Smith, and Max Griffin, and he is coming off a second-round stoppage victory over Cristhian Torres in his most recent appearance. The younger brother of UFC and WEC alum Anthony Njokuani, the 32-year-old is a smooth, technical kickboxer like his brother, and the kind of battle-tested veteran that could alter Sousa’s plans in a hurry on Tuesday.

Will the returning Brazilian become the latest repeat winner to earn a contract on their second attempt or will “Chidi Bang Bang” steal the show and earn an invite to join the UFC roster for himself? 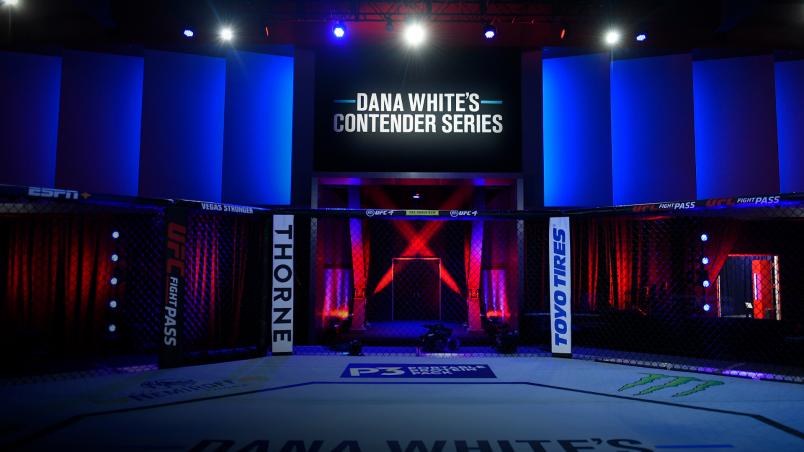 A general view of the Octagon prior to Dana White's Contender Series season 4 week one at UFC APEX on August 04, 2020 in Las Vegas, Nevada. (Photo by Chris Unger/DWCS LLC/Zuffa LLC)

Experienced veterans Saimon Oliveira and Jose Alday meet in a featherweight contest midway through Tuesday’s fight card, hoping to finally deliver the performance that vaults them into the UFC Octagon.

Fighting for the first time since the end of 2019, the 30-year-old Oliveira was originally scheduled to face Javid Basharat, but visa issues led to the late shift to Alday. A winner of four straight and nine of his last 10, the Astra Fight Team representative is a proven finisher and submission specialist, having earned eight of his nine recorded stoppages by some form of choke.

LOOK BACK AT THE RESULTS FROM DWCS EPISODE 1

A natural bantamweight, Alday moves up a division on short notice to face off with Oliveira, eager to build off his first-round stoppage win over Marcos Lopez in May. The 29-year-old Mexican veteran has fought in a number of organizations over the years, spending the last four competing under the Combate Americas baner, where he earned wins over current UFC talents John Castaneda and Gustavo Lopez.

On paper, Oliveira is the more established finisher and boasts a more impressive record, but he’s also fighting for the first time in nearly two years, while the battle tested Alday has shared the cage with better overall competition and earned a victory just a few months ago. This should be a spirited affair from the outset and the victor has a chance to be a potential all-action addition to the UFC roster.

Former Ultimate Fighter Brazil contestant Bruno Korea looks to earn a second chance to compete in the Octagon, while CJ Vergara looks to maintain his current impressive form after taking out a Contender Series alum last time out in this clash of talented flyweights.

Korea made it to the semifinals on Season 4 of The Ultimate Fighter Brazil and was submitted by fellow cast member Matheus Nicolau in his lone appearance in the Octagon in towards the end of 2015. He’s gone 8-2-1 since that night and arrives in Las Vegas on a six-fight unbeaten streak that includes four stoppage victories and a championship victory under the Taura MMA shingle.

A protégé of UFC veteran Pete Spratt, Vergara returned from an extended absence in March to claim the Fury FC flyweight title with a third-round stoppage win over Jacob Silva, who got two kicks at the can last season on the Contender Series. With four consecutive victories heading into Tuesday contest and an 8-2-1 record overall, a strong showing against Korea might be all the 30-year-old Texan needs in order to punch his ticket to the UFC.

Both of these men show promise and the flyweight division could always use more fresh faces, so don’t be surprised if an impressive victory by either man nets them a call to compete in the Octagon, while the vanquished remains on the UFC radar going forward.

Gafurov got back in the cage and back in the win column in January, ending a 14-month hiatus with a unanimous decision victory over Walter Zamora at the UAE Warriors show honoring Abdulmanap Nurmagomedov earlier this year in Abu Dhabi. Prior to that, the 26-year-old dropped a decision to longtime UFC contender John Lineker, which snapped a five-fight winning streak for the former Xtreme Couture fighter.

Anheliger began his career with a 2-5 record and headed into his eighth professional fight on a three-fight slide. Since then, “The Monster” is unbeaten in eight contests, earning seven stoppages and championship gold in two divisions in British Columbia’s Rise Fighting Championship. Last time out, the 34-year-old from Calgary stopped recent TUF 29 finalist Brady Hiestand, and if he keeps his momentum going through Tuesday’s opener, Anheliger could become the latest Canuck to join the UFC roster.