Sean Woodson Is Enjoying The Journey

Sean Woodson Is Feeling Free And Having Fun As He Enters UFC Fight Night: Holloway vs Rodriguez
By Thomas Gerbasi, on Twitter: @TGerbasi • Nov. 11, 2021

The first fight after a first loss is always a telling one for a top prospect.

“I'm definitely happy to be back in the win column, but I didn't really feel that feeling of being able to take a sigh of relief because I'm my worst critic,” said Woodson. “I just wasn't happy with my performance at all, and that just doesn't sit well with me. If I went out there and felt like I really performed well, yeah, I probably would be telling you right now that I had that feeling, but even though I got a win, I just don't feel like I performed well at all. And I know that's important in the UFC's eyes. In our mind, we're just worried about winning, but the UFC wants you to also perform well, and that's what I'm excited to do in this fight. I'm excited to get back out there and perform the way I know I can.”

On Saturday, Woodson gets his next opportunity to impress his harshest critic – himself – when he faces fellow Dana White’s Contender Series alum Collin Anglin. And even if he ends the fight in spectacular fashion in ten seconds, he might not fulfill that goal.

MORE UFC FIGHT NIGHT: Fight By Fight Preview | Fighters On The Rise | Max Holloway Isn’t Afraid of The Hard Path | What Yair Rodriguez Wants With All His Heart

“That might play a part in why I'm where I'm at today,” Woodson admits. “I'm never satisfied. I'll be happy for a brief second, but my hand wraps won't even be off in the back and I'm already fixated on what's next.  That may come from being a fan of the sport for so long, and the UFC in particular, and I know that no matter how many fights you got on your contract, you're never safe. You could be one bad performance away from the chopping block.”

But a ten second finish? 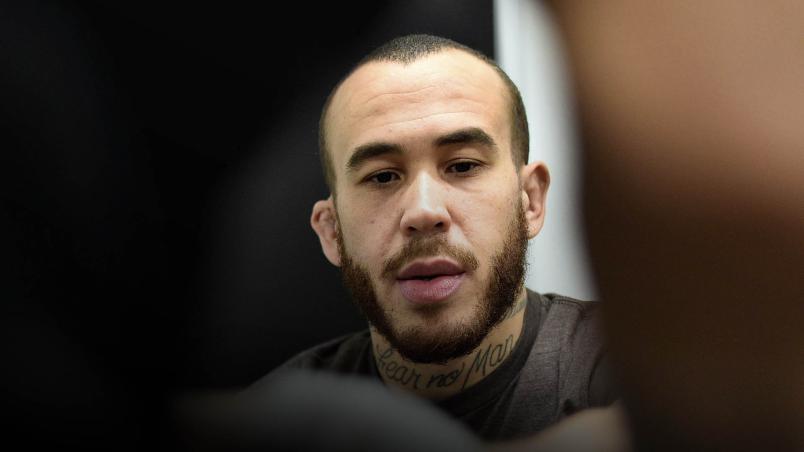 Sean Woodson has his hands wrapped prior to his bout during Dana White's Contender Series at the UFC Apex on July 23, 2019 in Las Vegas, Nevada. (Photo by Chris Unger/DWCS LLC)

“If I go out here and smoke this dude in 10 seconds, you wouldn't be hearing that from me,” he laughs. “I'd definitely be ecstatic, especially after coming off a split decision in the last fight.”

It’s a tough way to go through life, for sure, but Woodson believes that he’s made it to 8-1 and the UFC because of his belief that there’s always room for improvement. But he wasn’t always the perfectionist that he is now.

“I definitely didn't always have this,” said the 29-year-old. “As far as being a perfectionist and really being professional and getting dialed in and focused and as disciplined as I am now, that came when I turned pro. The reason why I got so hardcore disciplined like that was the overwhelming feeling I had that I had already wasted so much time. From 20 to 25, I wasted a lot of time. I'd be 22-23 years old watching guys in the UFC that were 21, 22 and they're already there in the UFC. And here I was and I hadn't even made my pro debut yet. And I started boxing when I was eight years old. Everybody was telling me I was supposed to be pro at 18 and I just wasted a lot of time. But the whole time, I still had it in my head that I was gonna do all these big things.”

Thinking about it and doing something about it are two different things, though, and once he realized that, “The Sniper” was off to the races.

“Finally, when the switch flipped for me and I put action behind all my thoughts, I said the only thing I can do is focus on what I can control and make the best of the time I have left,” he said. “I wasn't gonna waste any more time and I was going to sincerely give this all I got, and it was full steam ahead from there.”

Turning pro in 2016 at the age of 24, Woodson made it to 5-0 before getting the call to compete on season three of Dana White’s Contender Series. A second round knockout of current UFC hot prospect Terrance McKinney earned Woodson a UFC contract, and while he lost to Julian Erosa in June 2020 after debuting with a win over Kyle Bochniak, the victory over Zalal put his stars in alignment once more, even if he may not necessarily agree. But that’s okay, because as hard as he pushes for perfection, Woodson is enjoying the ride. 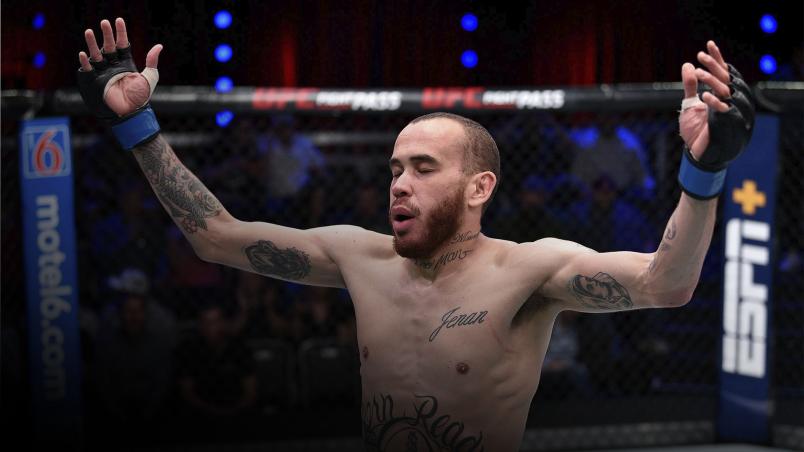 “There are other MMA fighters around the world that would love to be in this position and there's even more people that would love to just be able to live their dreams out, and I get to do that,” he said. “So I definitely enjoy this journey. I don't want to be so focused and so tunnel vision that the days just fly by and the years go by and the next thing I know, I'm done fighting. I want to be able to soak it in and enjoy it and I make a conscious effort to do that every day.”

For proof, just catch him on Saturday in Las Vegas.

“When it's fight night, that's the celebration for me,” Woodson said. “That's when I get to go out and have fun and do what I love to do. This is what I asked for. It don't make sense for me to work so hard and dedicate so many years of my life and then train so hard in these training camps to get here right at the moment and have all these negative thoughts. There's no point. That's the time to go out there, be free and have fun.”