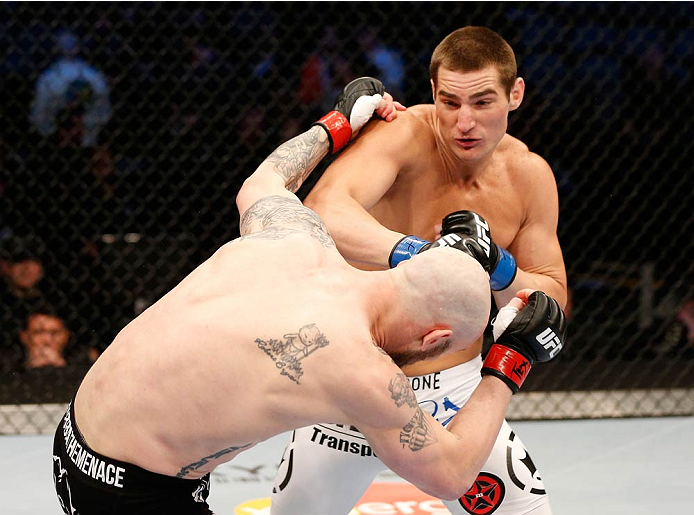 He knows it was boring and he’s not going to let that happen again.

In what would ultimately be his last bout at middleweight, undefeated Sean Strickland took home a split decision win over Luke Barnatt by avoiding the brawl and sticking behind his jab. The German crowd at UFC Fight Night: Munoz vs. Mousasi saw a strategic Strickland land leg kicks early and often, which evolved into Strickland sticking and moving behind his quick left lead.

It wasn’t the most exciting fight for sure, but it was a smart fight against a dangerous opponent in a weight class Strickland was planning to exit.

“Prior to the Luke Barnett fight, it was decided that 170 was the better option, but the UFC offered me the fight a week after my last fight and I’m not one to turn down a fight at 185, so I decided to do one more fight there,” Strickland said. “Luke Barnatt is an awkward fight. You’ve got a guy who is 6’6” and has that long reach and he has a chin like a rock. He wants you to get in his face and to brawl. I was training with guys of his height for a long time and I’ve learned how to fight those guys and beat those guys, but it was just a boring fight. Obviously, I wasn’t impressed with my performance and I wish I could do it again, but it is what it is. I got the W and I have to move forward and give better and more exciting fights from here on out.”

The win in May was the 23-year-old’s second inside the Octagon, with his first being much more fan-friendly: a first round rear naked choke of Bubba McDaniel at UFC 171. Besides his unblemished pro record improving to 15-0, Strickland did have a positive takeaway from the bout with Barnatt, which was a revelation of sorts about composure and the ever-elusive X-factor instead of giving into aggravation.

“If we’re all doing the same thing, we’re all training with the same caliber of guys, what separates us from one another,” he asks. “I think the thing that separates great fighters from average fighters is intelligence, to be honest. If we’re all training the same way, training with the same caliber of people, and fighting at the same weight then there has to be an X-factor that separates us. That’s the mental game. It’s controlling your emotions. It’s when someone is booing you to not get mad and bite down on your mouthpiece and throw an overhand right trying to get the KO. The mental game is the X-factor, being able to adjust and think and do what I needed to do to beat him.”

That’s not to say the California native found no fault in his final performance at 185 pounds, because it does take two to make for an unexciting tango. “There are things that disappoint me in the Barnatt fight, like I could have pulled the trigger more,” Strickland said. “I could have followed up with another punch or a kick, but I wasn’t pulling the trigger. This next fight, I want to pull the trigger more.”

Up next, “Tarzan” will head to Porto Alegre, Brazil to tangle with welterweight Santiago Ponzinibbio at UFC Fight Night: Bigfoot vs. Mir. The Ultimate Fighter Brazil 2 alum improved his already impressive pro record to 20-2 with an 80-second knockout of Wendell Oliveira in September. The Argentine known as “Gente Boa” is now a member of American Top Team and boasts 17 finishes. While Ponzinibbio has proven his ability to be dangerous on the feet and on the ground, Strickland believes his aggression will lead to his undoing.

“Santiago is a perfect example of what separates the great fighters from the good fighters,” Strickland said. “I have seen Santiago fight and he’s through and through a fighter. He’s a guy who the crowd loves, he’ll bite on the mouthpiece and throw the overhand right. I feel like that’s what separates me from him. I watch him fight and I see every hole in his game and I know how to exploit that. Now, it just comes down to pulling the trigger when the time comes.”

In preparation for his welterweight debut against Ponzinibbio, Strickland has criss-crossed The Golden State seeking out hard training and solid wisdom from some of the UFC’s best. At Dethrone, Strickland was put through the ringer by Josh Koscheck and his breakneck pace. At Reign MMA, Strickland battled it out with Mark Munoz and Michael Bisping. At his home gym of Millennia MMA, Tarzan saw hard sparring with “The Monsoon,” Lorenz Larkin, who just made a hugely successful drop to 170 pounds. All the hours in the gyms and the travel to and from are a testament to Strickland’s level of commitment to success inside the Octagon.

“You have not seen my full potential,” he said. “I’m not in the UFC to get a couple wins and get a couple losses and then go on my way. I’m in the UFC to be a champion. Santiago is one of the steps I have to take to put myself in that champion spot. Obviously, I’m young in my career and I’m young in the UFC and I have a long way to go, but you are going to see my name and you’re going to see it stick around for awhile.”