Bouncing Back From A Knockout Loss, Sean Strickland Hopes To Get Back To The Winner's Circle At UFC Fight Night: Cannonier vs Strickland
By E. Spencer Kyte, on Twitter @spencerkyte • Dec. 13, 2022

Sean Strickland absolutely loves his job, though not surprisingly, the combustible middleweight also acknowledges that he also hates his job a good portion of the time, too.

“It’s a job, but it’s a job that I love,” said Strickland, who returns to action this weekend in a main event matchup opposite Jared Cannonier that was initially slated to take place in mid-October. “It’s the best job in the world, but with that, it’s also the worst job because you could get knocked the f*** out and you’re waking up like, ‘What the f*** just happened?’”

Strickland is intimately familiar with that feeling that makes the job the worst at times, as that is precisely what happened to him last time out. 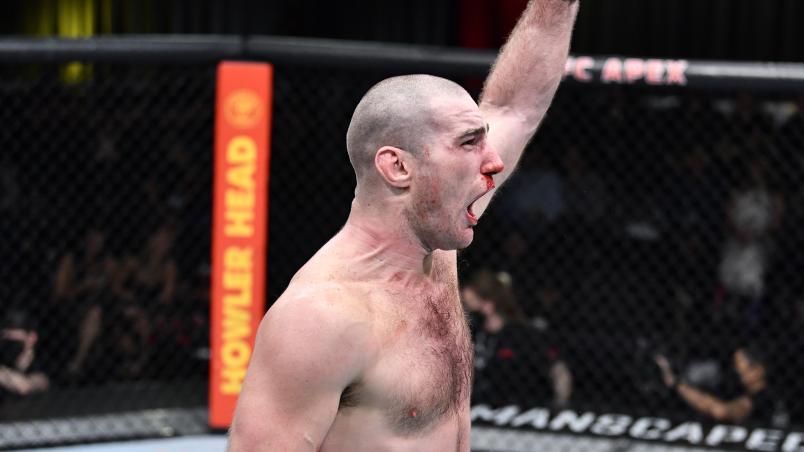 Sean Strickland reacts after the conclusion of his middleweight fight against Jack Hermansson of Sweden during the UFC Fight Night event at UFC APEX on February 05, 2022 in Las Vegas, Nevada. (Photo by Chris Unger/Zuffa LLC)

Paired off with Brazilian contender Alex Pereira at UFC 276, the 31-year-old entered on a six-fight winning streak, having amassed a perfect 20-0 mark when competing in the 185-pound weight class. He was ticketed to be the Top 10 test for the former standout kickboxer, who was looking to continue his rapid ascent up the rankings and into a championship clash with his former rival, Israel Adesanya.

“I got a little too…” began Strickland, cutting himself off mid-sentence. “I was planning on wrestling; we just didn’t get that far. You’re fighting a guy who is what? Six-three, six-four, 82-inch reach? That’s a big m*****f*****, and I just didn’t see his hook, man.

“Don’t get me wrong: any time you lose, it f****** sucks, dude,” he said, clarifying that the outcomes of these fight do, in fact, resonate with him, if even only for a brief period of time. “If we’re talking about losing a 25-minute decision, that’s one thing, but when you’re working your *** off for months and then in less than two minutes or however long it was — that kind of loss really sucks because you look back in time at all the grinding, all the rounds you put in and that sucks.”

He takes a beat.

“But, at the end of the day, we’re idiots,” he added, tacking on the kind of self-deprecating or dismissive remark that often follows those rare glimpses into the things that genuinely mean something to him. “We go into the cage with four-ounce gloves and try to murder each other; how serious can you take that? It’s like two dogs barking at a gate — how serious do you take that?”

What’s ironic is that while Strickland likes to position himself as a misanthrope born 30-odd years too late and stuck in a world of “betas” who prefer making TikTok videos to riding motorcycles, working on cars, and firing guns like he does, his views about readying to step into the Octagon and compete fall far more in line with the thoughts of a fully actualized man who is able to separate who he is from what he does for a living.

It’s an extremely healthy perspective from someone that often carries himself like he’s a bad day or two away from moving out into the middle of nowhere and severing his ties with the modern world.

“Here’s the thing: I’m training with some of the best guys in the world and I’m doing everything in my power to be successful,” said Strickland, who has found a home training at Xtreme Couture in Las Vegas. “I’m getting the hardest rounds, the hardest work, and after that, it’s to the gods, man; only they know.

“That’s the only way you can look it: you put your work in and if you’re successful, the work paid off; if you get caught, it is what it is.”

Having spoken with Strickland multiple times since he returned to action following the motorcycle accident that nearly ended his career and left him on the sidelines for more than two years, it’s glaringly obvious that he takes great pride in his work ethic and the effort he puts into preparing to compete. 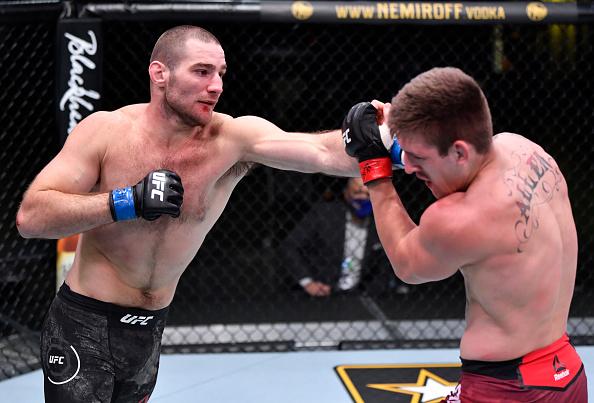 While he’s dismissive of a great number of things — and will happily take shots at the way others prepare or speak about their own efforts in the gym — the purposefully brusque middleweight always wants to make sure everyone knows that he puts in the work.

“Any time you talk to somebody and they say, ‘Training camp is going great, I’m not injured, I’m ready to go smash this guy,’ they’re full of s***,” stated Strickland, who has a reputation for going hard in sparring and was forced to the sidelines ahead of his initial date with Cannonier after a cut on his finger suffered during a round with UFC light heavyweight Ion Cutelaba became infected. “Training camp sucks, you’re f****** always injured, limping in and out of the gym; you’re sick of cutting weight.

“Any time you get that BS spiel, they’re either lying or he’s (not training for real). Training sucks. Things hurt.”

“When I go to the gym, I don’t pick the low-level amateur to go spar five rounds, or the low-level pro to go beat up for five rounds,” continued Strickland. “It’s Cutelaba, (Magomed) Ankalaev, Jiri (Prochazka). It’s not so much that I bring out the fight; it’s that I don’t spar cans, and most Americans, their training is predominantly with cans.”

The more I speak with Strickland, the more it feels like I’m figuring him out — recognizing these patterns, adding a few more pieces to the puzzle and drawing closer to seeing the full picture. 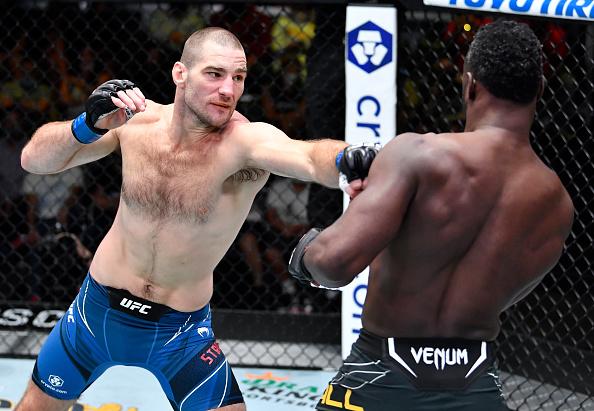 And the closer I get, the more I think he’s just the grown-up version of a kid that was an outcast through no fault of his own, that never really learned how to establish meaningful connections and is therefore extra guarded when it comes to letting anyone see glimpses of his true self.

It comes out in flashes — those brief moments where the brashness recedes and those glimmers of pride slip out — and when it does, I see glimpses of myself in the perpetually agitated middleweight.

“I love fighting and I love making money, I want to have a f***** war, and I want to get re-signed by the UFC and for them to pay me more money,” began Strickland when asked whether there is an urgency to get back into the win column this weekend and if victories in the Octagon bring him any satisfaction. “I want to be a happy guy, but at the end of the day, the more you fixate on MMA and the more that you chase it, the more it f**** you in the end.

“I enjoy life so much more when I’m not fixated and obsessing about it.”

Now, five months after having a terrible day at work, Strickland is set to get back to it. He’s done all the prep, as miserable as it constantly can be, and is ready to step in there opposite Cannonier this weekend.

“It’s nice to fight a human-sized person,” he said, a sharp, single chuckle chasing his words. “A big human, but a normal-sized person.

“I just think I’m better than Jared,” he added, the gravel and tension stripped out of his voice, almost like he was a little uncomfortable giving himself praise. “He’s a heavy-handed guy and not somebody that you want to get hit by, but on the ground, wrestling, standup, I’m just better than him.”