Sean Spencer: A Dream worth Waiting For

"I’m more ready than I ever have been in my life. Physically, mentally,
spiritually, I’m more prepared than ever before going into this fight." - Sean Spencer 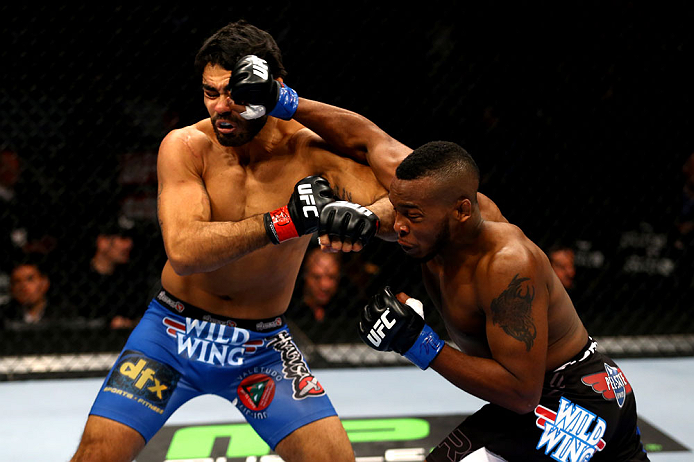 Since Sean Spencer decided to dedicate himself to a career in mixed martial arts, seeing his name on the UFC roster has been a large part of the dream. While the goal of becoming champion still has the lion’s share of the vision, battling his way into the Octagon has been one step of that ambition realized—and sometimes the payoff is worth the wait.

After building a solid buzz on the strength of an electric run on the regional circuit, Spencer suddenly saw the doors to the next level of MMA beginning to open. Offers from some of the larger promotions in the sport began to roll in, but the one organization he was intent on fighting for still had yet to show interest.

This left the Virginia native with a tough decision on his hands. With the unpredictable nature of MMA, opportunities come and go in a flash. Having to look back when his career was all said and done and realize he took the wrong path was certainly a possibility he could face, but it wasn’t enough to detour him from staying the course to accomplish his ultimate goal.

With this in mind, he turned down several options the majority of young fighters would jump at without question, and when the opportunity he had been waiting for presented itself, Spencer knew his decision was justified.

The Octagon MMA-trained fighter stepped up short notice to face Rafael Natal at UFC on FOX 6 in January, and while he would come up short in his first showing under the UFC banner, the chance to compete on the sport’s biggest stage was an achievement he had been striving for from the get go.

“One of the reasons I was waiting for the UFC to call is because I was actually supposed to be on the first season of the show Fight Master,” Spencer said. “I turned that down because I knew I would eventually have my opportunity to fight in the UFC. When they called me to fight Rafael Natal, I jumped right on it. I knew that was my one and only chance. Bellator was mad that I turned it down, but I told them I wanted to fight in the UFC and nowhere else. It’s definitely a dream worth waiting for. I lost my first fight, but when I come back in this next fight against Yuri Villefort, things are going to change.

“Every fighter in the world wants to fight in the UFC. It’s where all the top fighters in the world are at and I wasn’t going to short change myself. Being in the UFC means the world to me and it’s half the dream realized. Now I have to start climbing that ladder and I’m up for the challenge.”

“That was the idea going in, but I don’t take any fight without knowing I’m going in there to win. Getting into the UFC was the plan with that fight with Natal and I was confident going in. He was a really tough opponent and I just came out on the losing end of that fight. I knew that going in and went out there and gave it my best.”

Just as Spencer will be gunning for his first UFC win at Fight Night this Wednesday, his opponent will be looking to accomplish the same task. The Team Blackzilians fighter came up short in his official debut against Nah-Shon Burrell at UFC 157 back in February, and will be looking to make good fighting in front of the fans in his native Brazil.

Villefort brings a well-rounded skill set into the cage, but it is his aggressive fighting style that is perhaps his most dangerous asset. Spencer appreciates the Brazilian’s intensity and has every intention on bringing the same fire into the Octagon on Sept. 4 in Belo Horizonte.

“It’s a good matchup for me,” Spencer said. “He likes to stand and trade and I feel I have the advantage in the standup department. He may have a bit of an advantage on the ground but I know what I’ve done to prepare for this fight. I went through hell in this camp and I’m coming out with the ‘W’. I know that for a fact.”

While every fight under the UFC banner comes with pressure and circumstance, Spencer’s bout with Villefort will come equipped with another interesting challenge as he will battle the stigma of American fighters facing Brazilians on their home turf.

Since the UFC re-ignited their relationship with Brazil back in 2011 at UFC 134, foreign fighters traveling down to Brazil to compete have not fared well. Only a handful of American competitors have managed to find success in the Mecca of MMA, with the majority taking notches in the loss column.

The Brazilian fans are intensely passionate about the sport and have come to be recognized as one of the most enthusiastic collections of fight followers around the globe. They pile in to the venue early on fight night and create an electric atmosphere that can be difficult for visiting fighters to handle. Spencer hasn’t invested too much time worrying about this, and he plans to block out the noise on fight night.

“I’ve never been on an international flight before and I’m actually excited about it. I know it’s going to be a long flight, but that isn’t a factor to me. I know it has affected people in the past, but I’m enjoying the journey and looking forward to it. As far as fighting in front of a hostile crowd, I don’t know what the crowd is going to be like in Brazil. I haven’t really put too much thought into that aspect of it. If they are booing or cheering it really doesn’t matter to me; I’m going in to fight and that’s it. They aren’t going to do anything physical to me, so it really doesn’t matter.

“I’m more ready than I ever have been in my life. Physically, mentally, spiritually, I’m more prepared than ever before going into this fight. I’m bringing a lot more pressure and there will be no backing out or backing off at any phase of the fight. I’m going to be in Yuri’s face from the opening bell until the last. It’s going to be a great fight and I’m very excited to be a part of it.”