"I guess I did make a good impression, but not exactly what I wanted to do. I know there’s still more out there for me and still more to prove." - Sean Soriano 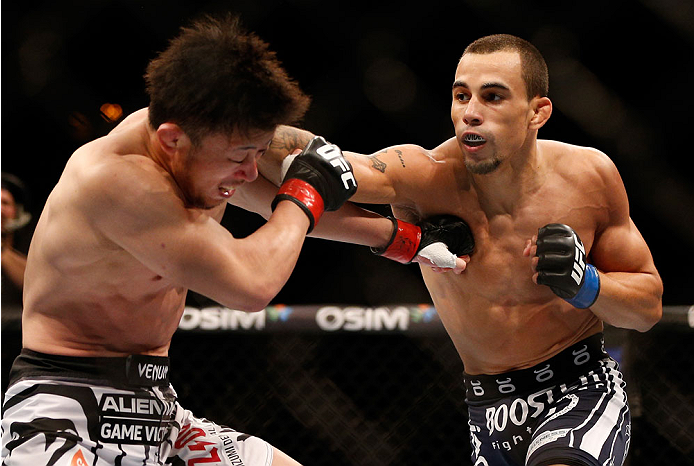 Short notice, a fight against an opponent with over 40 mixed martial arts fights, and in Singapore, no less. It’s the triple threat no fighter wants to deal with, especially when your own pro record of eight fights is a spotless one.

Most fighters in Sean Soriano’s position might have said thanks, but no thanks, to such an offer, and no one would have blinked twice. The Providence native said yes though, traveling across the world to face Japanese contender Tatsuya Kawajiri in his UFC debut in January. Sure, it was a gamble, but fighting itself is often a roll of the dice, and the 24-year-old was confident that he would be rolling sevens.

“I was real confident going into that fight,” Soriano said. “I don’t know why, but I felt like I could beat him, and I still feel like I can beat him.”

He didn’t beat Kawajiri, but it wasn’t because he wasn’t ready for the big time or just froze under the bright lights. It was just one of those things. After a good first round, Soriano made a tactical error in the second and was submitted by a contender who knows all the tricks.

“I just made a couple mistakes where I think experience got me,” he said. “It (fighting in the UFC) was something I’ve always wanted, so when the time came, it was like ‘okay, nothing’s stopping me.’ So the confidence was really there.”

It should have been. A former Rhode Island State champion in wrestling, Soriano developed his MMA game down south in Florida with the Blackzilians team, and he compiled an 8-0 pro record in the process before the loss to Kawajiri.

“Honestly, I feel like this is where I get my best training,” he said of relocating to Boca Raton. “Rhode Island’s so small that we only have a couple guys that are really as dedicated as I am to my craft.”

It wasn’t an easy decision to make, but it was the only one as far as Soriano was concerned.

“It was tough, but they understood,” he said when asked his family’s reaction to the move. “They know how I am. They know I go out and go get the best if I have to. At first they were a little sad and bummed out, but everything worked out for the best.”

Tomorrow night, they’ll get to see how well it worked out for him, as Soriano will open up the UFC Fight Night event in Mashantucket, Connecticut, 50 miles away from the city he grew up in.

Of course, getting to this point wasn’t without its bumps in the road, as the featherweight prospect was sidelined by a back injury that kept him out of action since his debut. He admits that it wasn’t the ideal situation, but it hasn’t swayed him from his positive outlook on things.

“It’s frustrating, but then again, I’ve had time to better my game overall,” he said. “I went through a couple injuries, so I was recovering for a while, but I’m happy to be in the UFC, so I’d rather be more patient than impatient with things like this.”

You don’t hear the word ‘patient’ from too many 24-year-olds.

“I’m trying to stay for a while. I’m not trying to go anywhere.”

No one expects him to be making a quick exit from the promotion, and if his effort against Kawajiri was any indication, he’ll be here for a long time. Not that he was thinking about that in the aftermath of his first loss.

“I’m very hard on myself,” he admits. “But then everybody was telling me that I fought awesome, especially since I only had three weeks to train. So after a while, after hearing it from everybody, I guess I did make a good impression, but not exactly what I wanted to do. I know there’s still more out there for me and still more to prove. I’m happy, in a sense, with my performance, but I’m my biggest critic, so I can pick and choose what I didn’t like and what I did like.”

What he did like is that he gets another crack at it tomorrow night, only not against his original opponent, Andre Fili, who withdrew due to injury. In steps Chas Skelly, who will be looking to win his second fight in less than two weeks. Soriano has no intention of letting “The Scrapper” make history.

“In front of my fans, my family, my friends, I’m not losing this one,” he said. “I can’t. This is gonna solidify me and start my UFC career. I feel like the Kawajiri fight was a little taste for everybody, and this time I can go out and show what I really have.”

And from there, he’s got big dreams, but ones he feels are realistic.

“I want to get my first win under my belt and solidify myself in the UFC, and I have a two-year goal where I want to get a title shot,” Soriano said. “I feel like some people aren’t realistic with time, and I’m one of those guys that I think I’m pretty realistic with myself. I don’t make dreams up that I don’t think I can accomplish. But in two years, I want to have that gold and I’m just going to take it fight by fight, starting with this one.”